Built in 1695, for Colonel Abraham de Peyster (1657-1728), Mayor of New York City and Governor of New York. It stood on Queen Street (now Pearl), near Cedar and nearly opposite Pine, between the Fly Market and the Coffee House. Standing three stories tall with an attic, it measured 59-by-80-feet. It was entered by a large double door over which hung a balcony that, "for nearly a century was the favorite resort of the governors of New York when they wished to hold military reviews". The rooms were large (some were 40-feet deep) and the walls and ceilings were "handsomely decorated" and the latter hung with paintings by the old masters. All their furniture was imported and the silverware in daily use was estimated even back then to have been worth $8,500. There were sixteen servants, nine of whom were slaves, dressed in the de Peyster livery which was "a blue coat, with yellow cape, cuffs and lining... and the buttons plain velvet". The grounds covered a whole block and there was a coach house and stables to the rear....
zoom_in 3 images 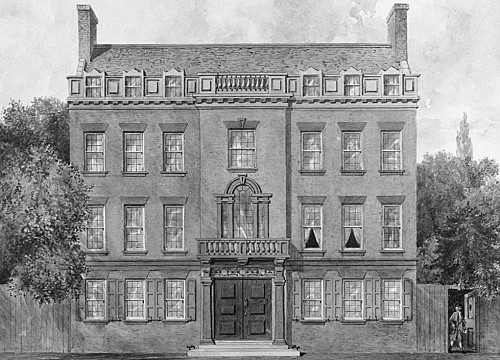 Abraham de Peyster, Treasurer of the Province of New York

4th President of the New York Chamber of Commerce

After the Colonel died in 1728, it became the home of his elder son, Abraham, who for 46-years was the Treasurer of the Province of New York. Like his father had done, he lived here in "a stylish manner" and conveyed himself around New York in his coach which was "silver-trimmed, emblazoned with the family arms, and drawn by four beautiful grays". He and his wife, Margaret Van Cortlandt, had a large family and some accounts say that their son, James, was resident here in 1776, but the Chamber of Commerce records show that Abraham sold the house in 1769 to the Hon. Henry White (1732-1786), 4th President of the New York Chamber of Commerce, who was also married to a Van Cortlandt, Eva.

As a prominent Loyalist and a member of the Governor's Council, White's estates were among the earliest to be confiscated in 1779 and four years later he shipped out with the British. In 1784, their old home became the townhouse and official residence of Governor DeWitt Clinton. Two years later it was sold to the White's son, Henry White Jr., who was the grandfather of the Mrs Astor and coincidentally was married to his cousin, yet another lady of the Van Cortlandt family, Anne. White did not move in, instead it became the unofficial governor's residence and the state paid him an annual rent of $300.

From 1794, Queen Street and Dock Street were merged into Pearl Street and after that the history of the de Peyster house - surprisingly for a house of such prominence - seems to drift into the shadows. By about 1800, the balcony over the front doors had disappeared and it was finally demolished in 1856. Back in in the early 1700s, Abraham de Peyster donated part of the land that had once been his garden to the city on which to build City Hall. His bronze statue - erected at Bowling Green in 1896 - has recently been brought out of storage and is now found next to the new F&M art building on Buchanan Avenue.

The Island at the Center of the World: The Epic Story of Dutch Manhattan and the Forgotten Colony That Shaped America By Russell Shorto