Built in 1686, for Lt.-Colonel Edmund Quincy II (1628-1698). In 1635, the 400-acre estate on which the house stood was granted by the City of Boston to William Coddington (1601-1678), 1st Governor of Newport and Portsmouth, and the Colonel's father, Edmund Quincy I (1602-1636). Several historic houses were erected by the Quincy family on this estate, including the Josiah Quincy House. Although the exterior of this house was completed in the 1750s, the interior still shows many elements of the original 17th century house – one of only a few surviving examples in Massachusetts. Today it is operated as a house museum, and whereas it is often incorrectly associated with Dorothy (Quincy) Hancock, historians are certain that it is named for her aunt for whom the famous 19th century poem "Dorothy Q." was written....
zoom_in 1 images 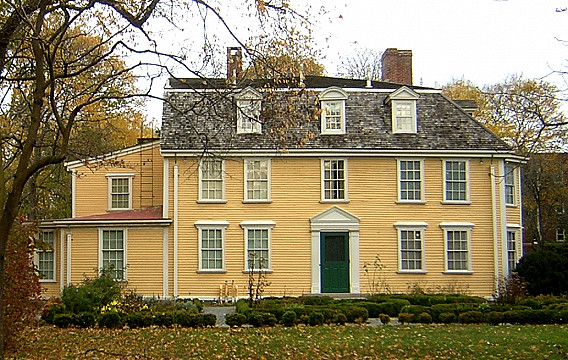 In 1706, the mansion was remodelled by the Colonel's son, Judge Edmund Quincy III (1681-1737). The timbers with which the house was built were made from trees that had grown in State Street, Boston, and were rafted across the bay to Quincy. Some of its curious features include a hidden room lighted from the upper panes of the windows in the kitchen below, and shafts with ropes for bringing up provisions from the cellar.

The history of the house surrounding Dorothy (Quincy) Hancock, the First Lady of Massachusetts, is controversial: Contrary to how the house is often perceived, historians generally agree that Dorothy’s father, Edmund Quincy IV (1703-1788), lost control of the estate in 1763. Though Edmund made several horticultural and structural improvements to the estate, the house became a forfeiture in 1755 when he ran into financial difficulties. The deed of ownership then passed to his brother-in-law, Edward Jackson (1707-1757). At best, it is considered that Edmund and his family only used the house sparingly. In any event, since the courtship, marriage, and married life of John Hancock and Dorothy Quincy took place after 1769, it is unlikely - bordering on impossible - that any of these events took place here, and there is no documentary evidence to suggest otherwise.

There are and have been many persistent legends that would imply that this was the home of the celebrated statesman John Hancock, and its nickname - the "Dorothy Q. House' was for his wife, Dorothy Quincy. This probably arose when the house first became a museum, but is discounted today. Just as there were several Edmund Quincys, there were several Dorothy Quincys. And the name "Dorothy Q. House" at first probably referred not to Mrs Dorothy Q. Hancock, but to her aunt, Dorothy (Quincy) Jackson (1709-1762). This Dorothy was the subject of a very popular 19th century poem written by her grandson, Oliver Wendell Holmes Sr., (who married another of her descendants) entitled “Dorothy Q.”

From the Quincy/Jackson family, the property came into the possession of James Bradford of Braintree. In 1769, the 400-acre estate that was comprised of the mansion house, three further houses, and two barns was definitively sold for £2,800 to Mrs Mary (Woodbridge) Alleyne (1701-1778). Mrs Alleyne was the widow of Major Abel Alleyne of Barbados whose daughter had married her first cousin, Sir John Gay Alleyne, of St. Nicholas Abbey, also in Barbados. In 1739, Abel Alleyne came to Massachusetts for his health and he built a large house on Milton Hill, near Braintree, which has since been demolished.

Just behind the house is a slope of land that commands a fine view of the ocean and this has since been developed into Alleyne Terrace. Imbedded over the door in the rear of the house is a cannon ball, a relic of the Revolution, while Mrs Alleyne was resident. After she died in 1778, the property was put up for sale: "The mansion house and out-houses with as much land adjoining the same will bring as much as £1,604... the fertility of its soil, its contiguousness to the salt water, together with its beautiful situation for a Gentleman’s Country Seat, it is presumed will be sufficient inducement for many purchasers to attend the sale which will be at the Dwelling House on the premises".

The Alleyne family held on to the estate until for a further 20-years, selling off the mansion house and 258-acres in 1788 to Benjamin Beale (d.1826) of Dorchester (now part of Boston) for £981. In the same year, “the large and beautiful estate” was sold to Moses Black, who renamed the property "Black’s Creek" and maintained ownership until 1825. It was then purchased by Daniel Greenleaf (1763-1853) who left it to his son-in-law, Ebenezer Woodward (1798-1869). Woodward is also remembered endowing the "Woodward School for Girls" which is still in existence today on Hancock Street.

The Woodwards did not take up residence, but leased it to Peter Cleveland Butler (1829-1894) for whom the street and Butler's Pond are named. In the 1880s, the four lots that surrounded the homestead were purchased by the Rev. Daniel M. Wilson. In 1904, The Massachusetts Society of Colonial Dames of America purchased the house itself, turning it into a museum and renaming it “Dorothy Q. House”.

In 1906, the Dames entered into a partnership that still exists today with the Metropolitan Park Commission of the Commonwealth of Massachusetts: the Commonwealth would own the house and be responsible for the upkeep of the house and land, while the Dames agreed to furnish and maintain the interior. In 2005, the Quincy Homestead was designated a National Historic Landmark. The house still operates as a museum today and is open seasonally to the public. Tours are free of charge, but a donation is appreciated to help the comprehensive renovations that have been undertaken since 2005.

Our Own Country: A Novel By Jodi Daynard

Christmas in Quincy By Devney Perry