Built in 1658, for Lt.-Colonel Benjamin Berringer (1620-1661) and his wife Margaret Foster (1636-1681). St. Nicholas Abbey is one of only three Jacobean mansions that still stand in the western hemisphere, the other two being Drax Hall, also in Barbados, and Bacon's Castle in Virginia. Today, the mansion has been restored to its original splendour and its sugar plantation is once again fully operational, producing its own rum. The Barbados Tourism Authority lists St. Nicholas Abbey as one of the “Seven Wonders of Barbados” and as a cultural centre it attracts thousands of visitors a year....
zoom_in 2 images 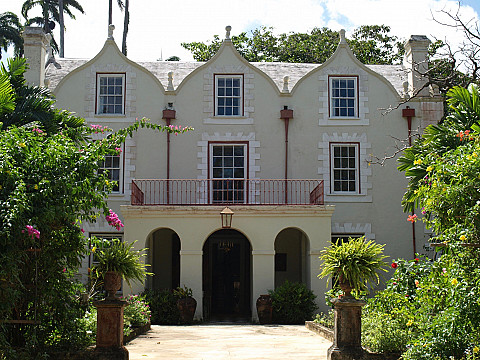 The white-washed Dutch-gabled frontage with tall finials of carved coral stone and corner chimneys would look quite at home in the English county of Dorset. Inside, its treasures include Wedgewood pottery and Chippendale furniture. The fireplaces and walled herb garden were almost certainly part of the original English Jacobean design.

The early history of St. Nicholas Abbey is tinged with murder and intrigue: Berringer shared the sugar plantation of 356-acres with his business partner, Sir John Yeamans (1611-1674), later the 3rd Governor of South Carolina. This proximity sparked an affair between Yeamans and Mrs Berringer - Margaret Foster (1636-1681). When it came to light a heated argument took place before Berringer left for Speightstown in 1661.

Berringer died just weeks after leaving the plantation. According to one source, Yeamans had arranged for a third party to poison him, whereas another version tells that their argument resulted in a duel in which Berringer was killed. Either way, almost immediately afterwards, Margaret married Yeamans and the Berringer/Yeamans plantations was merged with another next door, becoming known as the "Yeamans Plantation".

Back to the Berringers Through "the Black Widow"

Sir John Yeamans died in 1674 at the Yeamans Hall Plantation in South Carolina. His widow remarried William Whaley (b.1659) and she outlived him too, earning herself the nickname ‘the black widow’. When she died in 1681, the plantation passed to her eldest son, Jehu Bellinger. Jehu only survived his mother by one month, and after his death the plantation passed to his daughter, Susannah, and her husband George Nicholas.
The Nicholas Plantation, the Alleynes & Rum

Mrs Susannah Nicholas loathed Sir John Yeamans, the assumed murderer of her grandfather, and she refused to associate his name with the estate, renaming it the "Nicholas Plantation". They lived here until the 1720s when the price of sugar fell and they were forced to sell to Joseph Dottin (1690-1735), the member of a prominent Barbadian family. He provided each of his daughters with a plantation for their dowries and it was Christian Dottin who was gifted the Nicholas Plantation in 1746.

Christian married Sir John Gay Alleyne, 1st Bt., for whom Mount Gay Rum is named and the father of Sir Reynold Alleyne for whom Alleynedale Hall is named. Sir John did much to improve the Great House: Considering the Jacobean style outdated, he added the triple arcaded portico, sash windows, and the intricate Chinese Chippendale staircase up which his son, Sir Reynold, was said to have ridden his horse in pursuit of a lady!

In 1763, to celebrate the British victory that concluded the French and Indian War, Sir John replaced the Cherry trees that had lined Cherry Tree Hill (the entrance to the estate) with Mahogany trees - the first of their kind on their island and still seen today. More significantly for the prosperity of the Nicholas Plantation, Sir John added a rum distillery to bolster the sugar, molasses, and syrup exports already being produced here for the European and American markets. At the height of production, the Nicholas estate was considered to be one of the most successful plantations in Barbados, if not the Caribbean.

Following the death of his first wife in 1782, Sir John married his first cousin, Jane Abel Alleyne, daughter of Major Abel Alleyne, of Mount Steadfast whose widow later lived out her days at what is now known as the Dorothy Q. Homestead in Massachusetts. Sir John continued to live at the Nicholas Plantation until his death in 1801.

Lady Christian Alleyne’s will stipulated that the plantation should pass to her children, but her only son had already died aged twelve while at Eton and therefore the Nicholas Plantation reverted back to the Dottin family. But, with the Napoleonic Wars raging across Europe, attempts to track down the descendants of Joseph Dottin proved futile. During this time the estate began to incur considerable debts which led to it being possessed by the Court of Chancery at Bridgetown.

The Cumberbatch Brothers and Forfeited for Love

The young Edward had fallen in love with an English lady, Mary Gertrude Ashe, of Belvidere, Bath. As the daughter of a less than well-off musician who could provide no financial assistance to the running of the Cumberbatch estates, Edward’s elders did not approve of the match. His father made a provision in his will that Edward could only inherit if he held off from marrying Mary for five years – hoping that within that time Edward would see sense. Edward did not wait, marrying his beloved one year after the death of his father, at which point the family estates reverted back to his uncle. When his uncle Lawrence died in 1834, the plantations (Nicholas and Ebworth) were passed to Edward’s only sister, Sarah Cumberbatch (1797-1862), and her husband Charles Cave (1796-1887), one of the co-heirs to the Cave family fortune, derived from banking.

Around 1834, the plantation became known as "St. Nicholas Abbey". Charles and Sarah Cave were thought to have combined the property’s name with ‘St. Nicholas Parish’ in England (where the Cumberbatch family lived) and Bath Abbey in Somerset where the couple were married. Their eldest son, Stephen Cave (1820-1868), predeceased his father and therefore St. Nicholas Abbey passed to their second son, Lawrence Trent Cave (1825-1899). Lawrence Cave and his wife Lucy Greenwood (b.1842) were the first owners of the plantation not to live there: they resided in Florence, Italy, before returning to England.

In 1899, the plantation was inherited by Lawrence and Lucy's eldest son, Charles John Philip Cave (1872-1950), who was also an absentee landlord, though he and other family members did visit the plantation in 1935 when it was still producing sugar and syrup at the old mill. A home movie was shot during this visit that can be seen at St. Nicholas, giving a fascinating insight into life on a sugar plantation. Production of sugar and syrup ceased here in 1947 when it became more cost effective to outsource to a larger factory.

In 1964, Charles’ son, Lt.-Colonel Stephen Cave O.B.E., inherited St. Nicholas Abbey. In 1978, he moved to Barbados and became the first landlord to live there full-time since the 1800s. Stephen Cave delighted in sharing the treasures in his home and he opened the house to the public, making it one of the first heritage attractions in Barbados. Cave died in 2003 and having no children left St. Nicholas to his nephew, James Joseph Petri.

In 2006, Petri sold St. Nicholas Abbey to its present owner, the renowned Barbadian architect Larry Warren. He and his wife, Anne, have meticulously restored the property to its original splendour as an operational sugar plantation. Their mission is to develop St. Nicholas Abbey as an heritage attraction, cultural centre, and self-supporting plantation in order to generate tourism and sustain this exceptional legacy for future generations.

The Summer Country: A Novel By Lauren Willig

Sugar in the Blood: A Family's Story of Slavery and Empire By Andrea Stuart

Caribbean: A Novel By James A. Michener

Vaucluse By Donna Every