The original house was built circa 1545 for Sir Thomas Moyle, but it was mainly rebuilt in the style of that period between 1793 and 1799 for George Finch-Hatton, 9th Earl of Winchilsea, and again remodelled in 1843. In 1868, the 11th Earl ran into financial difficulties and leased the property to the Duke of Abercorn. Six years later, it was purchased by Alfred, Duke of Edinburgh - second son of Queen Victoria. He lived between here and Clarence House until succeeding his uncle as the Duke of Saxe-Coburg & Gotha in 1893. The following year it was purchased by the 2nd Lord Gerard and was sold by his son in 1920 to a man who never lived here. In 1924, it was bought by a cotton merchant, Sir John Pennefather (1856-1933) M.P., but finding it too large, he demolished it in 1926  before using much of its original materials to rebuild the manor as seen today....
zoom_in 8 images 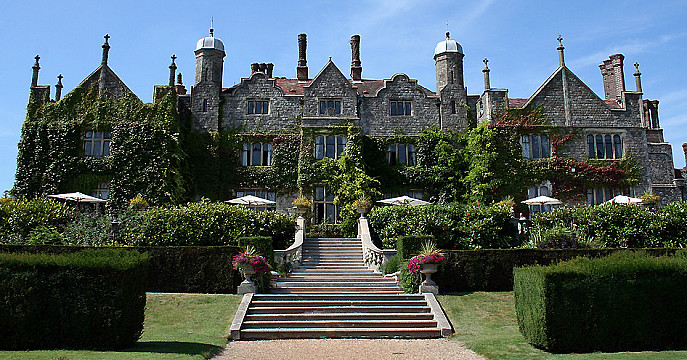 Alfred, Duke of Edinburgh and afterwards Duke of Saxe-Coburg & Gotha

The new manor was complete in 1928, by which time Pennefather had gone blind and he never moved in. In 1930, it was purchased by the Countess of Midleton, Guinevere, the former American chorus girl whose first husband, George Jay Gould, left her $1 million.

She and her husband, George Brodrick, 2nd Earl of Midleton, lived here until 1963, when - though still married to Guinevere - he upped sticks and left for Jersey with his mistress, Rene, who he eventually married in 1975, the same year Guinevere finally granted him a divorce by which time he was 87-years old! From 1963, Guinevere maintained Eastwell but spent increasingly more time in London and Europe. She died in Switzerland in 1978. The manor house has since been acquired by Champneys and is now an hotel, spa and venue.