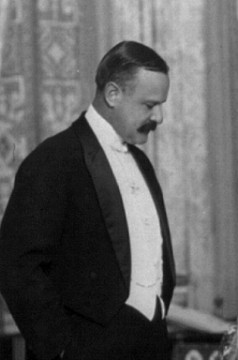 He was born in New York City and rather than go to college chose to work for his father, the notorious Jay Gould. At age 21, his father bought him a seat on the New York Stock Exchange and his surname ensured his addition to the boards of numerous companies. When his father died in 1892, he inherited one-sixth of his fortune and was placed in charge of the family businesses and their investments. Among others, he became President of the Missouri Pacific Railroad, the Texas & Pacific Railroad, and the Manhattan Railway Company. He did not however inherit his father's ruthless instinct, instead he had a more laissez-faire attitude towards business and his time at the helm saw the family's fortune shrink from $84 million to $50 million.

He enjoyed his wealth and listed his interests as yachting, polo, tennis, golf, hunting, fishing and chess. He lived at 857 Fifth Avenue; wintered at Georgian Court in Lakewood, New Jersey; and, summered at Furlough Lodge in the Catskills. In 1894, he paid $25,000 for the Vigilant, the yacht that won the America's Cup in the previous year.

In 1886, he was married at Lyndhurst to Edith Kingdon, a stage actress and a great beauty in her day by whom he had seven children. He doted upon Edith for many years but as her buxom figure relaxed with age his eye began to wander. By 1911, he started an affair with a chorus girl twenty years his junior, Guinevere Sinclair. He put her up in an estate on Manursing Island near Rye and contrived to take his yacht there on weekends.

By the time Edith died in 1921, he had fathered two children by Guinevere and bought her a house closer to home at 323 West 74th Street. Six months after Edith died, George and Guinevere were married at Lakewood and she gave birth to their third child the following year. By way of a honeymoon and to escape the reverberations his marriage had caused in society, the family immediately took off for Europe. From England they leased Castle Grant in Scotland before journeying to Egypt in the winter of 1922 to wonder at the newly excavated tomb of King Tutankhamun. There, George contracted a fever (some say it was the "Curse of the Pharaohs") and after moving on to the Villa Zoralde at Roquebrune-Cap-Martin on the French Riviera his illness worsened and he died.

George had inherited something roughly in excess of $14 million in 1892 and he reckoned his estate to be $30 million by the time he died. But, once taxes and debts were paid, there in fact remained just $5 million to be divided between his children. That his elder children now had to share this with their three younger half-siblings to whom they had always referred to as "George's Bastards" did not help lighten their mood. Four years of litigation involving over 50-lawyers ensued which saw their legal bills spiral to $2.7 million by the time they drew a line under it. Guinevere walked away with $1 million and trust funds for her children by which time she was a Countess and living at Eastwell Manor.

It might be of interest to some that two of George and Guinevere's great-grandchildren are the half siblings of actor Eddie Redmayne: their eldest child, George Sinclair Gould (who changed his surname to Brodrick by deed poll in 1924) was the father of Maxine Mhari Gould Brodrick who was the first wife of Eddie's father, Richard Redmayne.