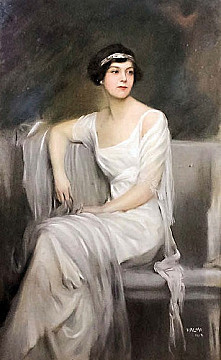 She was the grand-daughter of Sir Edward Burrowes Sinclair (1824-1882), a graduate of Trinity College, Dublin, who was Assistant-Master of the Rotunda Hospital and received a knighthood for founding a school for army midwives in Dublin. She became a chorus girl in New York and from 1911 started an affair with the multi-millionaire, George Jay Gould, who was twenty years her senior. He first put her up on an estate on Manursing Island at Rye, ear his yacht club, before buying her a house in New York City where she gave birth to two of their three children.

When George's wife, Edith, dropped dead in November, 1921, George and Guinevere were married six months later in a private and tense ceremony: Both the bride and groom were said to have appeared to be very nervous; the ring was too small, but the groom succeeded in working it up to the joint of her ring finger; and, at the end of the service, he kissed her on the cheek at which point, "the bride's eyes filled with tears". To avoid society's inevitable remonstrations, they immediately left for Europe.

George died barely a year later after having contracted a fever while visiting the newly discovered tomb of King Tutankhamun in Egypt. Once his will was finally settled in 1928, Guinevere received $1 million and trusts for her children. In the meantime, at Montreal on July 28th, 1925, she had married the more age-appropriate George St. John Brodrick (1888-1979), 2nd Earl of Midleton. From 1930, they lived at Eastwell Manor in Kent, before he left to live with his mistress in 1963. Guinevere did not allow him a divorce until 1975, by which time he was 87-years old! There were no children by her second marriage and after she died in Switzerland she was survived by just one of her three children, George.

Her son, George, is the grandfather of the two half siblings of actor Eddie Redmayne: George Sinclair Gould changed his surname to Brodrick by deed poll in 1924 and was the father of Maxine Mhari Gould Brodrick, the first wife of Eddie's father, Richard.