Built in 1767, for Lt-Governor Thomas Oliver (1733-1815) and his wife, Elizabeth Vassall (1739-1808). The mansion enjoys a long and lustrous history, intimately associated with many leading Brahmins, abolitionists, poets, and professors. Set on a gentle rise that once gave a fine view over the surrounding fields down to the Charles River salt marshes, it originally sat on an estate of 100-acres just over a mile west of Harvard Square. Designed by John Nutting, it is typically Georgian: square, symmetrical and spacious with a central hall and twisted banisters on the staircase. Since 1971 it has served as the official residence of the Presidents of Harvard University....
zoom_in 2 images 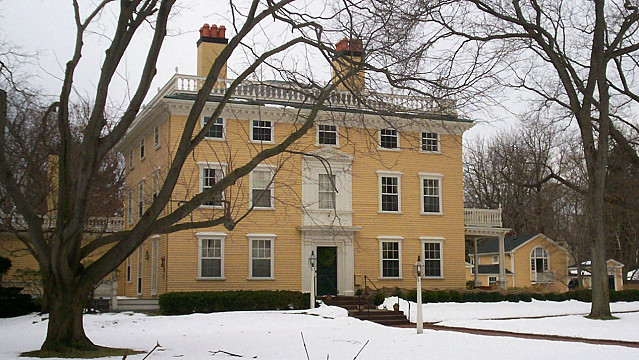 Thomas and Elizabeth Oliver both belonged to wealthy families whose fortunes were made through trading in the West Indies (slaves, sugar & molasses). Born in Dorchester, Thomas was an amateur poet who graduated from Harvard in 1753 and built his home on what was then known as "Tory Row". In 1774, he succeeded Andrew Oliver (1706-1774) as Lieutenant Governor of Massachusetts Bay and as the Revolution approached he doggedly refused to leave even though most other Loyalists had fled long before. Six months after taking up his post as governor, an angry mob of 4,000-Patriots surrounded Elmwood demanding his resignation. He left his home for the safer confines of Boston but remained in Massachusetts until 1776 when he finally sailed for England, never to return again.

From Conspirators to Pirates

During the 1776 Siege of Boston, Oliver's mansion served as an hospital for the Continental Army and among those who stayed here then was America's favorite antihero, General Benedict Arnold. In 1778, the mansion was officially confiscated by the State and sold at auction the following year. Having been branded as the home of, "a notorious conspirator," it next became the home of a notorious privateer, Andrew Cabot (1750-1791).

Cabot and his wife, Lydia Dodge (1756-1807), lived here until 1787 when they sold it to one of the Signers of the U.S. Declaration of Independence, Elbridge Gerry. He moved in shortly after his marriage to Ann Thompson (1763-1849) and was resident here when he was appointed 9th Governor of Massachusetts and then 5th Vice President of the United States - having taken the oath for the vice presidency in the study a year before his death.

The Lowells at "Elmwood"

Gerry died here in 1818 and his widow sold what was now known as "Mansion House" to the Rev. Charles Russell Lowell (1782-1861) and his wife Harriet Brackett Spence (1783-1850). Like Oliver and Gerry, Lowell too was a graduate of Harvard. He was Minister of the Unitarian Church of Boston and an outspoken abolitionist who preached from the pulpit against the slave trade to many of his congregation who had made a great deal of money from it. The Lowells christened the house "Elmwood" having surrounded it with rose bushes, lilacs, syringa, pines, horse chestnuts and elms, all designed to attract a profusion of bird life into its gardens. Charles Lowell also brought with him his collection of 3,000-books that he installed in the library and can still be seen here today.

Following his death in 1861, Elmwood eventually passed to Charles' youngest son, the noted poet, Ambassador and Professor, James Russell Lowell (1819-1891), who had been born in one of the upstairs bedrooms. He lived here with his second wife, Frances Dunlap (1826-1885) - who grew up at the Gilman Mansion - and his children by his first marriage to Maria White Lowell, who like her husband had also been a well-known poet.

James Russell Lowell: "The Seat of My Inspiration"

James Lowell described his "pleasant old house" as "the seat of (his) inspiration". In 1872, he and his wife left for their third tour to Europe, selling off some 25-acres of the estate to fund their two year trip and renting Elmwood to their friend and fellow poet, Thomas Bailey Aldrich (1836-1907). From Europe, Lowell described to Aldrich his feelings towards the place: "(It) doesn't elbow one, as it were. It will make a frightful conservative of you before you know it. It was born a Tory and will die so. Don't get to used to it. I often wish I had not grown into it so. I am not happy anywhere else."

Lowell always kept his doors open for any students passing by and Elmwood soon became popular with young poets seeking his sage advice. He also entertained many literary luminaries of the day including Charles Dickens (1812-1870), William Dean Howells (1837-1920), his neighbor Henry Wadsworth Longfellow and his closest English friend, Sir Leslie Stephen (1832-1904) who was the father of Virginia Woolf (1882-1941).

James Lowell was survived by just one his four children, Mabel. She too was born at the house and from 1890 she returned here to live with her husband, Edward Burnett (1849-1925), and their five children. Over the preceding years, much of the original 100-acre estate was sold off for development and part of it now makes up Lowell Memorial Park.

In 1920, Arthur Kingsley Porter (1883-1933) was appointed Professor of Fine Arts at Harvard and he leased Elmwood that same year to live there with his wife, Lucy Bryant Wallace (1876-1962). In 1925, the Burnetts sold the estate to the Porters and aided by family money on both sides they divided their time between Elmwood and Glenveagh Castle in Ireland. Porter held graduate seminars on the top floor; gave the students access to the extensive library; and, entertained them to tea, dinners, and talks in true old fashioned style: the reception rooms on the ground floor were still not connected to electricity so gas and candle light added a fitting ambiance to the storied old house.

In 1933, to the shock and horror of many, Porter went missing - presumed drowned - while spending the summer in Ireland. In his will, he stipulated that Elmwood should remain as the home of his wife until such time as she died and then it was to pass to Harvard University. Mrs Porter continued her husband's traditions and kept the doors of Elmwood open to both students and staff alike. She succumbed to death in 1962 at the ripe old age of 86 and as per the instructions left in her husband's will, Elmwood became the property of Harvard University with an endowment fund of $100,000.

The house was given a $130,000 renovation and in 1963 the university designated it the official residence of the Dean of the Faculty of Arts and Sciences - considered the second most important position at Harvard. Franklin L. Ford (1919-2003) moved in with family, resigning in 1969 following the police raid on University Hall. His replacement, John Thomas Dunlop (1914-2003), afterwards 14th U.S. Secretary of Labor, preferred his home in Belmont but initially made use of Elmwood for faculty dinner parties and such like.

In 1971, Derek Curtis Bok was appointed 25th President of Harvard University. For various reasons, but most importantly security, he was reluctant to take up at what up until then had been the president's official residence, Loeb House. Instead, he accepted Dunlop's offer to live at Elmwood while maintaining Loeb House for entertaining only - an arrangement that lasted until his retirement in 1991.

In 1962, the house became the centerpiece of the National Historic Landmark District in Cambridge. Since 1991, Harvard Presidents Neil Rudenstine, Lawrence Henry Summers and the present incumbent Catharine Drew Gilpin have all made their home in the 12-room mansion, enjoying its wide lawns, guest, and carriage house. Rudenstine remarked that, “it’s not a fancy house (but) its got wonderful proportions - and a sense of illumination and light about it that’s really wonderful".

Explore Harvard: The Yard and Beyond By Harvard University

Ghosts of Harvard: A Novel By Francesca Serritella

The Chosen: The Hidden History of Admission and Exclusion at Harvard, Yale, and Princeton By Jerome Karabel

After the Siege: A Social History of Boston, 1775-1800 By Jacqueline Barbara Carr

Cross of Snow: A Life of Henry Wadsworth Longfellow By Nicholas A. Basbanes

The Story of a Bad Boy By Thomas Bailey Aldrich

Virginia Woolf: And the Women Who Shaped Her World By Gillian Gill

Veritas: A Harvard Professor, a Con Man and the Gospel of Jesus's Wife By Ariel Sabar

The Last Brahmin: Henry Cabot Lodge Jr. and the Making of the Cold War By Luke A. Nichter