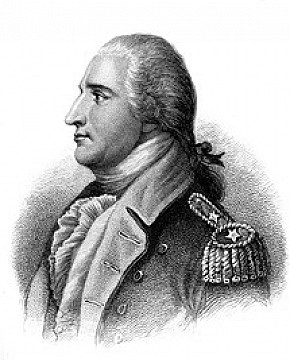 He was born at the Arnold Homestead in Norwich, Connecticut, and descended from the Governor of Rhode Island. He became a successful merchant at New Haven trading between New England, Quebec, and the West Indies. In opposition to the Stamp Act, he became one of the Sons of Liberty and on the outbreak of Revolution volunteered as a Captain with the Connecticut Militia, taking part in the capture of Fort Ticonderoga. He was primary among those who pushed for the invasion of Canada. Promoted to Colonel, the army made it to Quebec but the mission was a disastrous failure and Arnold's leg was shattered. Nonetheless, he was promoted to Brigadier-General and briefly held Montreal. Now noted as a master tactician, despite his later treachery it was his delaying tactics at the Battle of Valcour Island in 1776 that might otherwise have irreversibly tipped the scales of final victory in favor of the British.

Seeing further action in New England in 1777, he was (albeit controversially) promoted to Major-General before taking part in the Saratoga Campaign where he distinguished himself in both battles, although leaving his left leg severely crippled. He was then appointed military Commander of Philadelphia where he used his position to profiteer and lived extravagantly with his second wife, Peggy Shippen, at Mount Pleasant.

Many attribute his sudden decision to switch sides to the influence of his second wife. By July 1779, he was supplying the British with troop and depot locations, and strength in numbers. On being given command of West Point, he also now had control over the entire Hudson River and in exchange for £20,000 he set into action a plan that would allow the British to take West Point without loss of life. When the plan was foiled, he escaped from his residence, the Beverley House, to New York City and from there to the British lines in Virginia. The British gave him the rank of Brigadier-General and although he led the army which captured Richmond his ensuing rampage made him little more popular among the British as we was with the Americans - who ordered him hung if caught. The British General Clinton ignored many of his aggressive military suggestions but did allow him to sack New London in his native Connecticut, almost entirely burning it to the ground. Shortly before the British surrender in 1781, Arnold sailed to safety in England.

In London, he pushed for Britain to renew war with America, but his treachery to his native country had won him few friends in his new one and he was turned down when he applied for a position in the powerful East India Company. In 1785, he moved with his wife to Saint John, New Brunswick, where he invested heavily in land but again quickly found himself unpopular through his unscrupulous business dealings. He returned to London in 1791 and outfitted a privateer which he ran to the West Indies. He was captured by the French at Guadeloupe where he was accused of spying for the British and only eluded the noose by bribing his guards and escaping to the British fleet. In the 1790s, he helped raise militias on British-controlled islands in the Caribbean which made him popular with landowners. He had hoped it would win him back some respect and higher command, but instead he was compensated with 15,000-acres in Upper Canada. His many battle wounds finally caught up with him in 1801 and he died at his home in London, 62 Gloucester Place. He had 3-children by his first wife, Margaret Mansfield, and five more by Peggy.

Valiant Ambition: George Washington, Benedict Arnold, and the Fate of the American Revolution By Nathaniel Philbrick

The Tragedy of Benedict Arnold By Joyce Lee Malcolm