Built 1852, for Montgomery Blair (1813-1883) and his second wife Mary Elizabeth Woodbury (1821-1887). Originally located just over a quarter of a mile to the northwest of Silver Spring Mansion, the front entrance faced north towards the present-day intersection of Colesville Road and East-West Highway, bordering Eastern Avenue. It was burnt by Confederates during the Civil War; rebuilt, and then burned down in a controlled fire in 1958 to make way for an apartment building and supermarket....
zoom_in 1 images 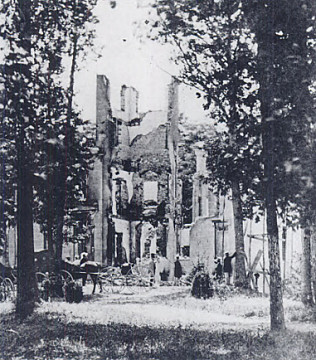 Falkland, after it was torched in the Civil War, 1864

Montgomery Blair was a lawyer who famously represented the slave Drew Scott (1795-1858) when he sued his master for freedom in the Federal Court. In 1861, Abraham Lincoln (1809-1865) appointed Blair to his cabinet as the 20th U.S. Postmaster General. During his tenure, he introduced free U.S. city mail delivery and prepaid postage; created a money order system; incorporated the use of railway mail cars; and, created an international postal system.

Blair built his elegant 24-room country home on a hill covered in pine trees across from his father's property, Silver Spring Mansion. Montgomery spent his summers here with his family, accompanied by servants and coachmen.

In July 1864, as Confederate troops under General Jubal Anderson Early (1816-1894) fell back from Washington following their defeat at the Battle of Fort Stevens, Falkland was put to the torch. Early denied giving the order to burn the house, although he considered it a justified act: He saw Blair as a native southerner who sat in Lincoln's cabinet and who had had the audacity to defend a slave in court. It is thought that Falkland was also burnt in reprisal for the burning of the house of John Letcher (1813-1884), 34th Governor of Virginia, as ordered by Unionist General David Hunter (1802-1886).

Blair was obviously furious for the torching of his house and while his son, Major Gist Blair (1860-1940), later shared his anger and blamed General Early directly, Blair's nephew, Senator Francis Preston Blair Lee I (1857-1944), had it on good authority that Falkland was burned by camp followers as opposed to the Confederate troops themselves.

Nonetheless, in August, General Benjamin Franklin Butler (1818-1893) wrote to Blair and General Ulysses S. Grant (1822–1885) informing them that he had sent General Charles Kinnaird Graham (1824-1889) up the river with army gunboats to burn the home of James Alexander Seddon (1815-1880) in retaliation for the attack on Falkland.

As Montgomery's son put it, the burning of Falkland (then valued at $20,000), "was a total loss, because although insured it was not insured against the public enemy". Nonetheless, Montgomery rebuilt the house after the war and divided his time between Falkland and the Blair House in Washington. He died at Falkland in 1883 and left the house and land to his youngest son, Montgomery Blair II (1865-1944), who in keeping with family tradition divided his time between there and Washington.

Montgomery II and his wife, Edith Draper (1874-1944), enjoyed rural life and on the farm at Falkland they kept horses, cows, pigs and turkeys. They brought up their children at Falkland but later moved permanently to Washington for his career, renting the house out to a lady who kept it as a boarding house for women.

When Montgomery II retired, he moved with his family to New York State, keeping a house at Bedford and a summer home in East Hampton. In the meantime, Falkland remained a boarding house but was becoming increasingly run down.

In 1958, the Blair Management Corporation instructed the Silver Spring Volunteer Fire Department to burn down Falkland in a controlled manner so that they could develop the land to be used for apartments and a supermarket. This included felling hundreds of pine trees that covered the hill upon which Falkland had sat, as well as levelling the entire hill itself.

Montgomery II's daughter, Edith Blair (1896-1921), grew up at Falkland and later married Rear-Admiral Adolphus Staton (1879-1964). Commenting on the demise of the house, she said, "I guess burning the mansion down to make way for progress was about as dignified a way for it to go as any". Her mother, Mrs Edith Blair, oversaw the construction of the new Falkland Garden Apartments that are today known as The Blairs.