Built 1824, for Joseph Lovell (1788-1836) and his wife Margaret Eliza Mansfield (1795-1836). Referred to by Time Magazine as, "the world's most exclusive hotel," since 1942 Blair House has served as the center and namesake of the four-house complex that makes up the official state guest house of the Presidents of the United States. The house has a long and rich history and it was here that: General Robert E. Lee (1807-1870) was offered - and refused - command of the Union Army; President Abraham Lincoln signed the Emancipation Proclamation during the Civil War; and, where Harry S. Truman (1884-1972) escaped assassination in 1950. Today, a procession of U.S. Presidents and foreign Heads of State make their home here while in Washington D.C....
zoom_in 1 images 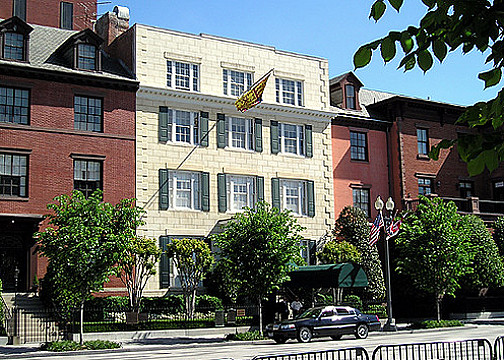 A former member of the Continental Congress and founder of the Army Corps of Engineers, Lovell was serving as Surgeon-General of the U.S. Army when he purchased a piece of land opposite the White House - on the corner of Pennsylvania Avenue and Jackson Place - from Stephen Decatur Jr., of Decatur House. The land was originally owned by Samuel Davidson of Evermay and it was here that Lovell built an elegant 2-story, 8-room, sand-colored, limestone house for his wife and 11-children But, just twelve years later (1836), within just months of one another, Lovell and his wife were dead. Today, Lovell's collection of medical literature forms the nucleus of the National Library of Medicine, but his house was sold by his trustees for $6,500 to Francis Preston Blair.

Blair and the "Kitchen Cabinet"

As a journalist in Kentucky, Francis P. Blair's articles came to the attention of President Andrew Jackson (1767-1845), who promptly brought him up to Washington and in 1830 appointed him editor of the The Washington Globe. Blair became the most influential of Jackson's informal group of advisors - known as the "Kitchen Cabinet". His reputation was such that he remained an important confidante to Jackson's successor, Martin Van Buren; and, Abraham Lincoln consulted with Blair during his tenure as President too.

From 1842 to 1852, the Blairs retired to their country estate in Maryland, Silver Spring Mansion. They rented their townhouse out to four cabinet secretaries including George Bancroft (1800-1891) and Thomas Ewing (1789-1871). In 1850, Ewing's daughter, Ellen, was married here to her father's ward, General William Tecumseh Sherman, in a ceremony attended by Clay, Webster and President Zachary Taylor (1784-1850).

In 1855, control of the Blair's townhouse was given to their eldest son, Montgomery Blair (1813-1883), 20th U.S. Postmaster General under Abraham Lincoln (1809-1865). He added an east wing and an additional two stories to the house (as seen today), as well as plastering the facade in stucco. He and his second wife, Mary Elizabeth Woodbury (1821-1887), lived between Washington and their summer home in Silver Spring, Falkland.

The Blairs Offer General Lee Command of the Union Army

Montgomery outlived his father, but died soon afterwards in 1883, followed by his wife in 1887. Their house was passed in equal shares to each of their four children, all of whom lived here for a limited period with their various spouses. Montgomery Blair Jr. (1865-1895) moved into the newly restored Falkland and in 1900 it was his three siblings - led by Minna Blair (1850-1919) - who successfully fought to prevent the house from being demolished under new plans being proposed by the government to modernize the capital. In 1912, the surviving Blair siblings held a silent auction between themselves to determine who should remain in the house. This was won by Major Gist Blair (1860-1940), who also managed to retain most of the heirlooms housed there too.

Gist Blair Redecorates in Old Style (1912)
Gist and his new wife, Laura, redecorated the old house, adding several Georgian pieces of furniture collected on trips to Europe. Colonial-era panelling was salvaged from an 18th-century mansion in Maine and retrofitted within the old rooms that displayed various treasures collected by the family over the years. Their books on America's natural, military, and political history still fill the library today while prints of family-related cartoons from the Globe, Judge and Harper's Magazine etc., still hang in the study.

Life at Blair House continued much as it had done for the previous century: frequent guests at the dinner table included U.S. Presidents Taft and Theodore Roosevelt, Jr. In the meantime, Gist's first cousin, Francis Preston Blair Lee I (1857-1944) - the first popularly elected Senator in United States history - was living in the adjoining house at 1653 Pennsylvania Avenue with his wife, Anne Clymer Brooke (1870-1903), and their son.

In 1934, the Major's fears that Blair House was still at risk from the urban development were allayed by a letter written to him by the newly elected President Franklin D. Roosevelt (1882-1945). The following year, Roosevelt signed an act of legislation to preserve historic sites and buildings etc., and in an effort to evaluate such sites, the National Park Service used Blair House as a case example:

Notable for its construction in which hand-hewn lumber and hand-made nails and hardware were used... built on ground once owned by Samuel Davidson, an original Proprietor of the District... one of 19-lots in that square bought by Commodore Stephen Decatur... now a treasure house of valuable documents, china, silver, Copley and Stuart portraits of national celebrities, a priceless library and a wealth of unusual books and pamphlets, much of it relating to the Gist, Woodbury, Hancock, Quincy, Dearborn and Blair families and their participation in great events of American history.

The Major's widow passed away in 1942. That year, the government - urged by Roosevelt - agreed to purchase the house and its contents from the Major's heirs for $150,000. A need for seamless diplomacy had become more apparent during the Second World War and the house was to be used as guesthouse for visiting heads of state.

According to Franklin D. Roosevelt, Jr., the need for a guesthouse was speeded up after his mother, Eleanor, found the British Prime Minister, Sir Winston Churchill, strolling towards her husband's bedroom at 3am for a chat - in just his night shirt with cigar in hand! Mrs Roosevelt displayed all her gifts of diplomacy by managing to persuade him that he might be better off to wait until breakfast before resuming their talks!

Following World War II, the White House was redecorated and Harry S. Truman lived at the Blair House for much of his presidency. It was in the Blair's dining room - where several cabinet meetings were held - that the decision to send American troops to Korea was made; and, some say where Truman made up his mind to relieve General Douglas MacArthur of his command. In 1950, Puerto Rican nationalists unsuccessfully attempted to enter the house and assassinate Truman. A plaque was erected to commemorate the heroism and sacrifice of the police officer who lost his life protecting the president.

In 1966, Blair House was added to the National Register of Historic Places, and in 1973 it was designated a National Historic Landmark. Today it is the central building of a 70,000 square foot, 119-room complex of four interconnected townhouses that make up the president's guesthouse for visiting monarchs, presidents and prime ministers.

American Gunfight: The Plot to Kill Harry Truman- and the Shoot-out that Stopped It By Stephen Hunter & John Bainbridge Jr.

A Guide to Civil War Washington, D.C.: The Capital of the Union By Lucinda Prout Janke