Built in 1845, for Francis Preston Blair (1791-1876) and his wife, Eliza Violet Gist (1794-1877). This old mansion was located just six miles from The White House, directly west on the left of the East-West Highway. The spring for which the house was named gave its name to the town that is found here today. It was passed down through the Blair's descendants - the Lees - until it was demolished without trace in 1954. Nonetheless, the estate is recognized and remembered today as "Acorn Park" for the distinctive acorn-shaped gazebo that the Blairs built in the grounds next to the lake....
zoom_in 4 images 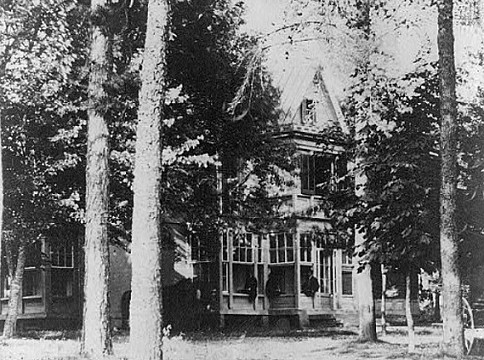 In the summer of 1840, Francis P. Blair of Blair House and his only daughter, Elizabeth, were riding on horseback down Seventh Street Pike (today's Georgia Avenue). Astride her horse, Selim, Elizabeth was not paying full attention as she was reading a love letter from her husband-to-be, Rear-Admiral Samuel Phillips Lee, and she was knocked from her saddle by the bough of an oak tree. Selim carried on and after a brief search by father and daughter the horse was found lapping at a small spring that in the sun appeared to be sparkling with silver, the water being infused with tiny particles of mica-sand.

By 1842, Francis Blair had purchased-1,000 acres surrounding the spring and three years later his 20-room mansion was complete. Over the next ten years, Blair went into semi-retirement from political life in Washington and lived full time at the place he and his daughter had named "Silver Spring" concentrating on developing the country estate.

"...Sugar Maples Lined the Walk from the House to the Spring"

The house - surrounded by flower and vegetable gardens, orchards and fields - had nine fireplaces, two kitchens, a wine cellar and baths fed from the spring water. The spring also powered the mill that was used to make flour, wash clothes, and churn butter.

Francis' grandson, Major Gist Blair, described the substantial two-story house itself, "in the old days of mouse (brown) color, and of the type of a French chateau.. A fine row of sugar maples lined the walk from the house to the spring". The ivy that climbed the walls of the mansion was a gift from U.S. President Martin Van Buren (1782-1862), and cultivated from clippings taken from Melrose Abbey in Scotland - the same clippings that gave growth to the ivy found at Sunnyside, the home of Washington Irving (1783-1859).

An Acorn-Shaped Gazebo and Famous Faces

A series of paths meandered through the estate's woods and meadows and Blair built a lake at the center of which sat a small honey-suckle covered island with a white marble statue of a water nymph. Near to the lake, he built an acorn-shaped gazebo from which "Acorn Park" takes its name today. The estate farm was worked by 15-slaves who lived in four slave houses on the estate. They raised pigs, cattle, horses and mules while tending to the crops of corn, wheat, sugar cane, and fruit.

Due to its proximity to the capital and Blair's influence with the leading politicians of the day, the family were frequently joined by ten or more guests around the dining room table. One of the most often seen was that of Abraham Lincoln, who would relax at the house by playing town ball with the Blair's grandchildren.

In 1850, Blair built "The Moorings" at the corner of Georgia Avenue and Blair Road for his son, James L. Blair (1819-1852), who had sailed to Antarctica under Captain Charles Wilkes before going with the Gold Rush to California. After his premature death, his daughter married the explorer George Montague Wheeler. It is the only one of the houses built on the estate that still stands today. Two years later, James' elder brother, Montgomery Blair (1813-1883), also built himself a home on the family estate that he named Falkland.

As Confederate soldiers under the command of General Early approached Silver Spring in the summer of 1864, the estate was vacated. The troops were encamped here for two days in July prior to the Battle of Fort Stevens when they dug up the front yard and took the Blair family silver. Several barrels of whiskey were also found and the wine cellar was looted resulting in drunken revelry that saw the lawn scattered with the Blair's papers, furniture, and clothing. It was only on the arrival of the commanding officers that the looting was put to a halt, and that it was not burnt to the ground is thought to have been due to the intervention of the Blair's Confederate cousin, General - and former U.S. Vice President - John Cabell Breckinridge. Their son's property, Falkland, was not so lucky.

Blair had intended to leave Silver Spring to his eldest son, Senator and General Francis Preston Blair, Jr. (1821-1875), but at Frank's request he changed his will and instead it aptly passed to his previously mentioned daughter, Elizabeth Blair (1818-1906), and her now husband Rear-Admiral Samuel Phillips Lee (1812-1897).

By the terms laid out in the will, Mrs Lee paid her brother, Frank, $20,000 in recompense for the property. In 1894, at the bequest of Admiral Lee, the Silver Spring was given a granite stone surround, donated by a prominent local businessman named Alfred Ray. The Grecian nymph statue that had stood on the island in the lake was then placed within the grotto. The Lees divided their time between Silver Spring and Washington and after Elizabeth's death in 1906 all their property was inherited by their only child, the already widowed Senator Francis Preston Blair Lee I (1857-1944), better known as Blair Lee I.

In 1913, Blair Lee I became the first man to be elected to the Senate by direct vote of the people following the adoption of the 17th constitutional amendment. He was a lifelong resident of Silver Spring, having been born in the house as well as dying here. On his death the estate passed to his only child, Colonel Edward Brooke Lee, known as the visionary developer who sculpted the town of Silver Spring as found today.

Better known as Brooke Lee, in 1922 he founded the Lee Development Group, of which he was president and chief Executive until his retirement in 1981. As the company logo, he chose the scene of his great-grandfather, Francis Blair, discovering the Silver Spring with his grandmother, Mrs Elizabeth Lee. Today, he is remembered by the Col. E. Brooke Lee Middle School and Lee Plaza in Silvery Spring, recognizing his role in the community.

In 1954, Silver Spring Mansion was demolished to make way for an annex to the Blair Station Post Office. The following year, "Acorn Park" was officially opened on the former Lee estate with a speech given by Blair Lee III (1916-1985), Brooke's son by his wife, Elizabeth Somerville Wilson (1895-1984). The Lees are still prominent in Silver Spring today and the Lee Development Group remains a family-owned business.

A Guide to Civil War Washington, D.C. The Capital of the Union By Lucinda Prout Janke

Battle Maps of the Civil War: The Eastern Theater By American Battlefield Trust