Completed in 1843, for Judge Samuel W. Dexter (1792-1863) and his third wife, Millicent Bond (1811-1899). Standing on an estate of 1,700-acres, it took two years to build and was designed President Millard Fillmore's brother, Calvin. Dexter named his home for his mother's family and the village he built around it for his father. The Dexters entertained at least two Presidents here (James K. Polk and James Buchanan) and as staunch abolitionists their home was an important stop on the Underground Railroad. After Samuel's death in 1863, his widow built a 4-story tower in place of one of the wings. Management devolved to their son, Wirt, a successful lawyer in Chicago and he sold off the lion's share of the land, reducing the estate to 70-acres....
zoom_in 1 images 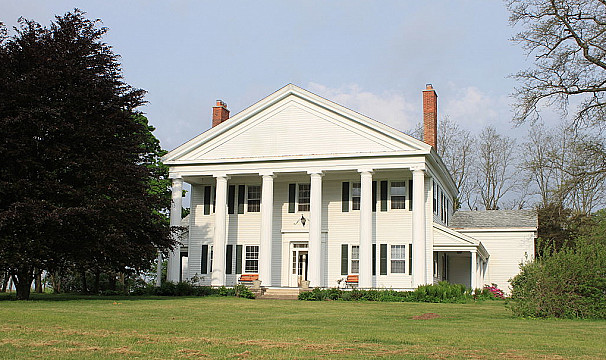 When Millicent died in 1899, her will stipulated that Gordon Hall was to be sold. The following year it became the property of Thomas Birkett. Having later vacated the property, it was very run down by the time he died in 1916. It was restored by the new owner, Dr Charles G. Crumrine, who moved in from 1919 but he died just five years later (1924). His so, Charles Jr., subdivided the house into apartments that he leased to various tenants while it again sank into a poor state of repair. It was rescued from its demise in 1939 when it was purchased by Wirt Dexter's rather remarkable daughter, Katharine, a prominent leader of women's rights who led the research that resulted in "the pill".

Katharine hired Emil Lorch (Dean Emeritus of the College or Architecture at the University of Michigan) to oversee its restoration with the thought of donating for the use of local women's clubs. The tower was dismantled and by 1950 the project was complete. That year, Katharine gifted the property to the University of Michigan (U-M). Opinions differ as to whether she stipulated that it be divided into staff apartments for staff and faculty members or whether that was undertaken independently by the university. After the interior was gutted, one of its first new residents was Alexander Grant Ruthven, who had retired as the university's president in 1951. It was maintained by U-M until 2000.

In 2006, the Dexter Area Historical Society and Museum purchased the property, and sold 2-acres of its 70-acres in 2009 to the United Methodist Retirement Community. Today, the house is effectively unoccupied and only occasionally used for tours and functions.

Historic Photos of University of Michigan By Christina M. Consolino with Michael Chumra