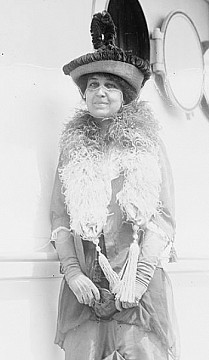 She was born at Gordon Hall in Dexter, Michigan, and grew up at the Dexter House in Chicago. She came from a prominent legal family and was a great-granddaughter of Samuel Dexter who served as U.S. Secretary of the Treasury under President John Adams. In 1904, after graduating in biology from the Massachusetts Institute of Technology (MIT), she was married at Geneva in Switzerland to Stanley McCormick, the dashing co-heir to the International Harvester Company fortune. Sadly, only years later Stanley developed schizophrenia and was declared incompetent, living out the rest of his days surrounded by doctors at Riven Hall, the McCormick estate in California. Katharine was already rich as Croesus and had perfect grounds to divorce him or have the marriage annulled as it was never actually consummated, but she stuck by her husband. She fought with the McCormicks over the direction of his treatment, protected him from radical psychologists, and funded research into his condition.

In the meantime, Katharine became a prominent pioneer of women's rights. As a leading Suffragist she was a key figure in having the 19th Amendment passed (giving women the right to vote from 1920) and was afterwards Vice-President of the League of Women Voters, educating women on politics. In the 1920s, she and Margaret Sanger smuggled thousands of diaphragms into the States and she used her wealth to almost single-handedly fund the research that resulted in "the pill". Having noticed that a lack of campus housing for women was a major barrier for those wanting to study at MIT, in 1959 she paid in full for MIT’s first on-campus residence for women which saw their number jump from 3% to 40% of the overall undergraduates. Katharine is a member of the National Women's Hall of Fame. She lived between the her mother's old home at 393 Commonwealth in Boston; the historic Chateau de Prangins in Switzerland; and also kept homes in New York and Santa Barbara, California. She died without children.

The Woman's Hour: The Great Fight to Win the Vote By Elaine Weiss

The Scarlet Sisters: Sex, Suffrage, and Scandal in the Gilded Age By Myra MacPherson