Built circa 1776, for Judge John Tyler (1747-1813), 15th Governor of Virginia, at about the time of his marriage to Mary Marot Armistead (1761-1797). Approached by a driveway lined with cedar and willow trees, Greenway is located on the north side of the James River, three miles west of the Charles City Courthouse. Judge Tyler described the modest, dormered home that remains almost unchanged to this day as, “a genteel, well-furnished dwelling”. It is the birthplace of President John Tyler (1790-1862)...
zoom_in 1 images 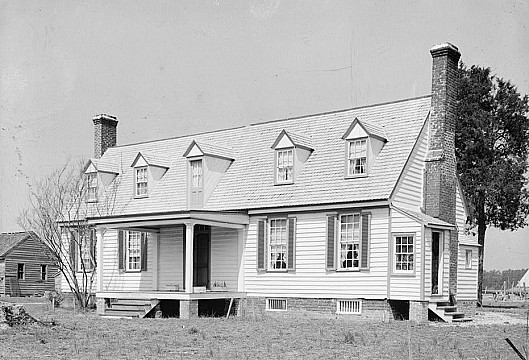 The house stood within a 1,200 acre plantation of wheat, corn and tobacco maintained by the Tyler’s forty slaves. The land was fertile, bounded by two free-flowing creeks, and the estate also encompassed two further farms - Mons-Sacer and the Courthouse tenement. In their day, it was surrounded by outbuildings including a study, storehouse, kitchen, laundry, dairy, meat house, icehouse, barn, two granaries, two carriage houses, twenty stalls for horses, general quarters and slave quarters.

Unique for it’s ‘T’ shaped plan, the one and a half story clapboard house with brick chimneys at either end has a symmetrical south facing façade. Standing on brick foundations, there are two bay windows either side of the main entrance on the ground floor, and five dormer windows in the wood-covered gable roof. The interior is noted for it’s formal layout and the original woodwork that includes the panelled fireplaces with fluted pilasters.

Judge Tyler’s eldest son, John Tyler (1790-1862), the 10th President of the United States, was born at Greenway and lived there with his family until his marriage in 1813 to Letitia Christian (1790-1842), of Cedar Grove. His father, who is buried on the estate, died in the same year and John inherited the property, though he did not return there until 1821. It served as his home during his tenure as the 23rd Governor of Virginia (1825-27), but he finally sold the property in 1829 before purchasing nearby Sherwood Forest; the plantation with which he is more famously associated today.

Ownership of Greenway came to Cyrus Wendell Beale (1887-1965) and in 1969 his heirs successfully added Greenway to the National Register of Historic Places. The plantation still remains in private hands and is remarkable for remaining almost unchanged for over 230 years.