Built 1780, for David Minge (1746-1781) and his wife Christiana Shields (1745-1814). The white frame mansion stands among terraced gardens and serene woodland on the north bank of the James River, six miles east of Charles City. It is the only historic Presidential House that is still occupied by the President Tyler's descendants. It’s architectural style is known as Virginia Tidewater and the façade spreads 300 feet across; making it perhaps the longest historic house in Virginia and certainly the longest frame house in America. Sherwood Forest is also home to the "Gray Lady," a ghost who has been heard rocking on her chair in the Gray Room for over 200 years...
zoom_in 2 images 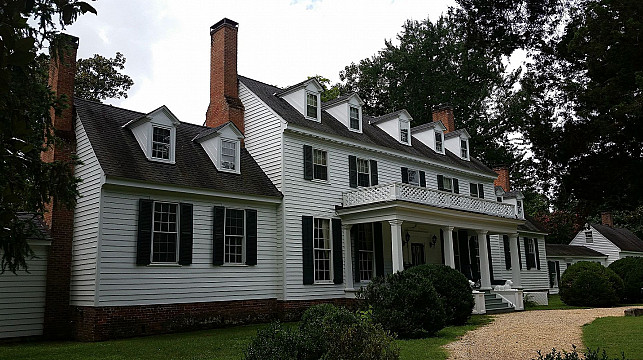 Collier Harrison Minge I, of Alabama

Almost all the histories of this house state it was either built circa 1720 or circa 1730 and erected by the Minge family. The Minge family were resident in the area then, but the first instance of one of them living at the house they named "Walnut Grove" comes around in about 1795. The National Park Service puts the date of Sherwood’s construction to be 1780, as does its listing as a National Historic Landmark.

The Minge family named the house for the walnut trees on the front lawn. After the death of Mrs Minge, the plantation was inherited by her eldest son, John Minge (1766-1827) and his wife Sarah Harrison (1770-1812), daughter of the Governor of Virginia, Founding Father Benjamin Harrison V (1726-1791), of the nearby historic Berkeley Plantation.

In 1845, John Tyler decided not to run again for the presidency and was expelled from the Whig Party, which came as a relief to Senator Henry Clay (1777-1852). Considering Tyler as a political outlaw, Clay stated that he was delighted to see "Robin Hood" Tyler retiring to his "Sherwood Forest". The comment amused Tyler so much that he changed the name of his plantation in the woods from Walnut Grove to "Sherwood Forest".

Tyler’s first wife and the mother of eight of his children, Letitia Christian (1790-1842), of Cedar Grove, had died at The White House two months prior to Tyler purchasing Sherwood. Two years later, he married Julia Gardiner (1820-1889), daughter of Senator David Gardiner (1784-1844), of Gardiner’s Island, New York. Mrs Julia Tyler enthusiastically threw herself into the task of restoring and decorating Sherwood, and though from New York, she became much enamoured with life in the South.

The three-story white frame house was lengthened by the Tylers into a symmetrical seven part home with a 300-foot façade containing 24 rooms and 16 fireplaces. The Tylers made many improvements to the house, adding wings with hyphens to connect them to the main house, and several outbuildings including a wine house, smokehouse and dairy.

One of the hyphens acted as the 68 x 12 foot “skinny” ballroom that was ideal for dancing the newly popular “Virginia Reel,” better known today as line-dancing. Another of the hyphens is known as “Whistler’s Walk,” so named as the Tyler's required their slaves to whistle while they carried their food up and down the corridor between the kitchen and the dining room in order to prevent them from eating what they were carrying.

The Tylers also added many Greek-Revival touches to the exterior of the mansion such as latticing, columns and pilasters on the porches. This they continued within the interior with cornices, mantles and carved medallions based on the pattern-book designs of Minard Lafever (1798-1854). Tyler, by his own hand, constructed storm windows at Sherwood which can still be seen today.

The plantation yard at Sherwood is considered to be one of the most complete of it’s kind in America, dating from c.1680. The formal gardens are contained within 26-acres laid out over terraces and lawns by the celebrated landscape architect, Andrew Jackson Downing. The gardens include a bird bath placed there by Mrs Tyler and over 80 varieties of century-old trees, including 29 species that are not native to America. The most notable of these trees is the Gingko given to Tyler by his friend Commodore Matthew Calbraith Perry (1790-1858) on his return from the Orient in the 1850s when he re-introduced the trees to America.

Tyler died in 1862, just as the Civil War was hotting up. By 1864, his widow and children were forced to flee Sherwood to Mrs Tyler’s mother’s home on Staten Island, New York, where they remained until the end of the hostilities.

When Mrs Tyler and her eldest son, David, returned to reclaim Sherwood, they found the house sacked by negro troops under General Edward Augustus Wild (1825-1891), with the help of some of their former slaves. On hearing of the sacking of Sherwood, General Wild rode out to investigate the claims:

Such a scene as the inside presented I never saw’. Everything had been broken up and smashed to pieces – mirrors, furniture, china and beds. John Tyler’s valuable and extensive library was vandalized with ‘the books & papers mutilated – simply for mischief’… In addition, some of his remaining private papers that had been stored in a bank vault for safekeeping were destroyed in the burning of Richmond.

Mrs Tyler’s prized blue boat, Pocahontas - once known as the ‘Royal Barge’ of the James River - had been confiscated by the Union; their livestock had been stolen and the laborers along with their 70 slaves had disappeared. Adding to her woes, Mrs Tyler found herself severely short of funds owing to the money she had lost in Confederate War Bonds.

Sherwood Forest into the 20th Century

After her death in 1889, the house was inherited by Mrs Julia Tyler’s eldest son, David Gardiner Tyler (1846-1927), and although cleared up after the Civil War, Sherwood was a shadow of its former self. In 1975, Sherwood and what had been reduced to just 50-acres of land was purchased by the President’s grandson, Harrison Ruffin Tyler (b.1928), from the estate of his late first cousin, Gardie’s son, James Alfred Jones Tyler (1902-1971).

Harrison had grown up at his grandfather’s nearby hunting lodge, Lyon’s Den, a few miles from his mother’s ancestral home, Evelynton. He married Frances Payne Bouknight (b.1933), of Mount Willing, South Carolina, and aided by Mrs Julia Tyler’s letters and the books she had used when she decorated the house in 1845, the couple set about restoring the property to it’s original splendour.

With painstaking attention to detail, they managed to reproduce the original French parlor wallpaper and the interior still contains furniture and art from the 18th century that either belonged to the Tyler family (including china used at The White House) or the family of Mrs Payne Tyler. Notable artefacts include: a silver tea set gifted to the Tylers by Meriwether Lewis (1774-1809); the President’s writing box, cane and violin; two stools that belonged to President Thomas Jefferson (1743-1826); several other valuable pieces of English furniture, and the only remaining copy of America’s first book of law drawn up by Virginia’s House of Burgesses.

Sherwood Forest was designated a National Historic Landmark in 1961. Today, the grounds are open daily with an admission fee from 9am to 5pm for self-guided tours, and house tours can be arranged by appointment. There is also a gift shop on the premises where light refreshments are available.