Built in 1867, for Harriet Beecher Stowe (1811-1896) and her husband, the Rev. Calvin Ellis Stowe (1802-1886). They purchased this 30-acre orange grove that had originally been part of the Fairbanks Grant for several purposes: to serve as a winter home away from Hartford; as an attempt to settle their son Frederick into plantation management since he'd become an alcoholic after being wounded at the Battle of Gettysburg; and, as an opportunity to help the local African-American community. The house overlooked the St. John's River, just east of where the Mandarin Community Club stands today. It was demolished in 1916 and a historic marker has since been put up to remind us of Mandarin's most famous resident, the author of Uncle Tom's Cabin....
zoom_in 1 images 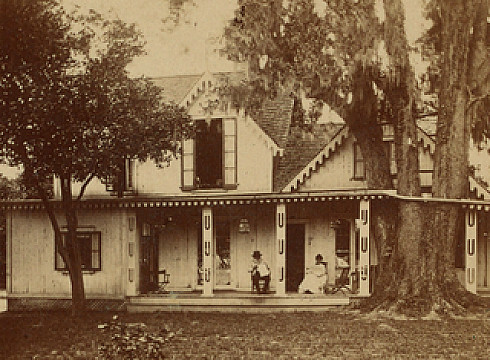 The Stowes initially lived here from November to May which aside from eliminating the heating costs with which they were otherwise encumbered at Oakholm, also saw them turn an annual profit of $1,500 from their orange grove. In a further attempt to reduce their overall expenditure, rather than furnish two homes they travelled from Oakholm every autumn loaded with carpets, chairs, books, cutlery, a tea service, and even a small stove. But in 1869, they moved here full time to escape the publicity storm that had exploded after Harriet published a badly received article concerning Lady Byron which saw her book sales plummet. Nonetheless, Harriet busied herself establishing mixed race missionary schools and writing articles on agriculture, property investment and tourism.

The Stowes sold Oakholm in 1870 and three years later (1873) they purchased the more manageable Harriet Beecher Stowe House in Hartford. That year, she also published Palmetto Leaves, a memoir of her time here and also a travel guide by which she hoped to entice northerners to leave the snow and spend their money in the south. The Stowes continued to winter at Mandarin until 1884, two years before Professor Stowe died.

On leaving Mandarin, Harriet requested that a window in memory of her husband was placed in the Church of Our Saviour. In 1916, a beautiful Louis Comfort Tiffany-designed stained glass window was erected, depicting the view from their porch which included oak trees, moss, and the river they adored. Sadly, it was destroyed by a hickory tree during Hurricane Dora in 1964, but a recreation is on display at the Mandarin Museum.

Mandarin on the St. johns By Mary B. Graff