Completed in 1899, for Harry Gordon Selfridge (1858-1947) and his wife Rose Buckingham (1860-1918). It was designed by Henry Lord Gay, of Chicago, and its name "Harrose" was derived from the owners first names: Harry & Rose. Harry Selfridge was the department store pioneer who achieved his biggest success in England - where he was known as, "the Earl of Oxford Street" - two years after he had retired in the States. When he built this house as a summer home he was already a junior partner with Marshall Field in Chicago and retired here from 1904. But, two years later he moved to England where in 1909 he opened the still famous Selfridge's department store on London's Oxford Street. From then on, he rarely returned to Lake Geneva and after leasing the palatial and historic Lansdowne House (the first home of William Waldorf Astor after he quit New York) as well as Highcliffe Castle, he sold Harrose in 1922....
zoom_in 3 images 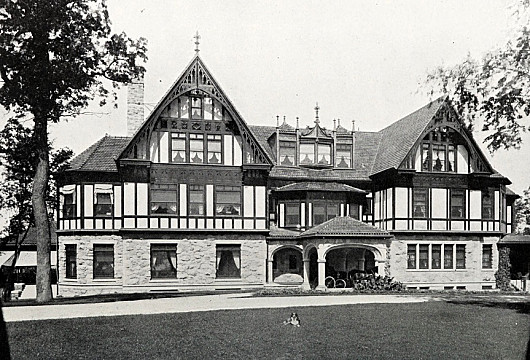 Overlooking the lake on the east shore next to Ceylon Court, Harrose Hall enjoyed a large greenhouse and a rose garden for Harry's beloved wife. The Selfridges also lived with Harry's equally beloved mother who had worked so hard to support him during childhood after her husband deserted them and her two other sons died. The elder Mrs Selfridge was particularly attached to Harrose Hall and before it was sold in 1922, she returned from England to take one final look and to spend time with the friends they made here.

From 1925, the new owners were Lawrence H. Whiting and his new wife, the former Eleanor Robinson Countiss who changed its name to "Somerset". Eleanor lived at the Countiss Mansion and was one of Chicago's best known society figures when she divorced her first husband in favor of Whiting. Their romance is said to have inspired Edna Ferber’s 1925 Pulitzer Prize-winning novel So Big. Over the years, the estate was subdivided, but the house and main gardens remained in the Whiting family until it was finally demolished in 1975. The Whiting family continue to summer at Lake Geneva.

So Big By Edna Ferber