Completed in 1768, for William Petty-Fitzmaurice (1737-1805), 2nd Earl of Shelburne & 1st Marquess of Lansdowne. It was designed by Robert Adam and was home to four British Prime Ministers: Shelburne himself, the Earl of Bute, Pitt the Younger, and the Earl of Rosebery. Shelburne's administration was marked by his belief in free speech, free trade, and autonomy for the American Colonies. In 1782, the Treaty of Paris that concluded the American War of Independence (signed in the French capital the following year) was drafted here by John Jay in the Round Room - now the bar of the Lansdowne Club - the only unaltered room in what remains of the house....
zoom_in 18 images 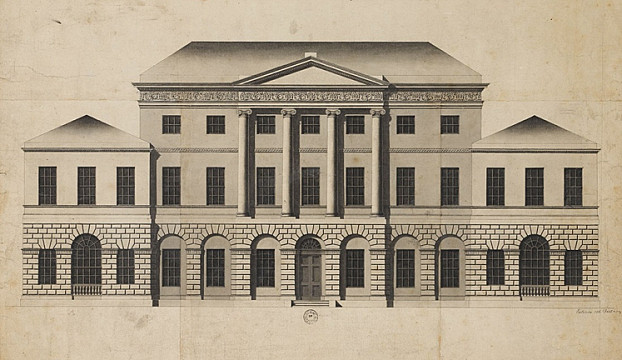 5th Earl of Rosebery; Prime Minister of the United Kingdom

The house may have been completed by the Earl of Shelburne, but it was in fact started by the Earl of Bute in 1763 who sold it uncompleted to Shelburne in 1765. In 1768, the Shelburnes moved in, but some of its exquisite interiors still took Adam a further year. The gallery (still seen as part of the Lansdowne Club) was a later addition: it was initially a library designed by Joseph Bonomi before being remodelled into a sculpture gallery by George Dance the Younger and completed by Sir Robert Smirke in 1819.

Shelburne's politics ensured he was despised by King George III which in turn helped to make his home a center for the liberal-minded elite of London. Frequent guests here included: the philosopher, Jeremy Bentham; U.S. Founding Father Benjamin Franklin; the thespian, David Garrick; the diarist, Samuel Johnson; and, the Comte de Mirabeau, the moderate French Revolutionary who became known as the "the voice of the people".

One of Shelburne's greatest friends in America was William Bingham of Philadelphia who John Quincy Adams admitted had really been in control of, "the Presidency, the Capital and the Country" during and after the American Revolution. Lansdowne House was the inspiration for the Bingham Mansion in Montreal and in 1784 John Penn, the last Colonial Governor of Pennsylvania, named his country home near Philadelphia  Lansdowne House when Shelburne was created the 1st Marquess of Lansdowne. In Natchez, Mississippi, there is also a small plantation house named Lansdowne, but this wasn't built until 1853 and was named by its owners for the 3rd Marquess of Lansdowne.

Lansdowne House remained the property of the Marquesses of Lansdowne until 1929. However, during that time it was intermittently leased out to several significant tenants including Prime Ministers William Pitt the Younger and the Earl of Rosebery. Rosebery and his wife, Hannah de Rothschild, lived here from 1878 during which time Oscar Wilde and the American poet Henry James were frequent visitors. After Hannah died in 1890, it was leased for two years (1891 to 1893) to William Waldorf Astor (later 1st Viscount Astor) after he'd turned his back on New York declaring America unfit for gentlemen. Its last tenant from 1921 to 1929 was the Anglo-American department store owner Harry Gordon Selfridge (1858-1947), known as "The Earl of Oxford Street". His wife, Rose, played the harp beautifully and was frequently called upon to entertain their dinner guests.

In 1930, the Borough of Westminster determined to build a new street that would connect Berkeley Square to Curzon Street and this required the demolition of the garden facade of Lansdowne House. However, two of the original rooms that would otherwise have been demolished can still be seen today: one of the Drawing Rooms was retrofitted into the Philadelphia Museum of Art; and, the Dining Room is now in the Metropolitan Museum of Art in New York City. What remains of the mansion was transformed into the Lansdowne Club which opened in 1935 at its new address, No. 9 Fitzmaurice Place.

The Club: Johnson, Boswell & the Friends Who Shaped an Age By Leo Damrosch

Georgian London: Into the Streets By Lucy Inglis