Built from 1902, the main house was enlarged in 1929 for Joseph Patrick Kennedy, Sr. (1888-1969) and his wife Rose Elizabeth Fitzgerald (1890-1995). It is situated on the south shore of Cape Cod, facing Nantucket Sound. Two of their sons, John Fitzgerald Kennedy (1917-1963) and Robert Francis Kennedy (1925-1968) subsequently bought houses nearby and the combined six acres of waterfront property became known as the Kennedy Compound. The main house is now part of the Edward M. Kennedy Institute for the United States Senate and the other two houses are still lived in by members of the family today. It remains private property and is not open to the public....
zoom_in 8 images 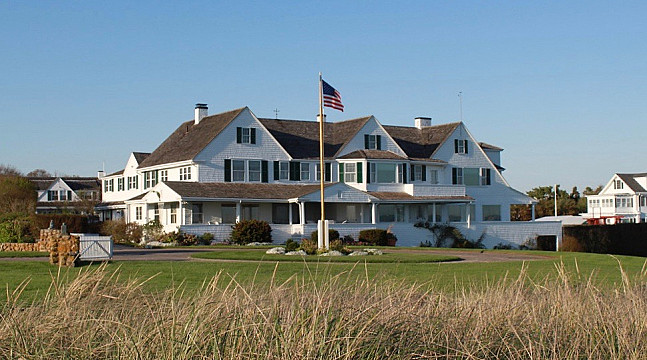 Senator "Ted" Kennedy, "The Lion of the Senate"

Joe Kennedy was the patriarch of the celebrated Kennedy family. Having become a millionaire in finance, he embarked on an equally successful political career that saw him appointed by FDR as the 44th U.S. Ambassador to the United Kingdom. He would have liked to have run for President but his attempts to appease Hitler and steer both the U.K. and U.S. from war saw him recalled and his career was finished. However, his ambitions were continued through his children, most notable of whom were: Jack, 35th President of the United States; Bobby, Senator and 64th United States Attorney General; and Ted, "The Lion of the Senate". His daughter, "Kick", became the Marchioness of Hartington.

The original structure of the main house on the compound was known only as 'the Malcolm Cottage'. Built in 1902, the seafront, white clapboard cottage with green shutters sat on grounds of 2.43-acres with its own private beach conveniently located between the Hyannis Yacht Club and the Hyannis Golf Club. From 1926, Joe rented it for summer vacations with his family. Three years later (1929), he bought the cottage for $25,000 and hired the original architect, Frank Paine of Boston, to remodel and double it in size.

On completion, the main house became an 18-room, triple-gabled white-washed vacation home with a wrap-around porch offering a magnificent view over the ocean. Interesting features include the private movie theater in the basement (the first of its kind in New England), a wine cellar shaped as a ship's hull, and a corridor with dolls collected from the family's travels around the world. The grounds consist of lawns and gardens with a swimming pool, tennis court and boathouse. It was here that the Kennedy children spent their happiest years and developed their passions for sailing and touch-football.

In 1956, John F. Kennedy, soon-to-be the 35th President of the United States, and his wife Jackie Lee Bouvier, purchased a smaller 12-room house at 111 Irving Avenue, slightly to the west of the main house on 1.39-acres of land. During the years leading up to his election, JFK used the compound as the base for his presidential campaign. After his election, it became his Summer White House and he spent a total of 113 days here during his tenure, including 34 weekends as opposed to just one weekend spent at his other vacation home on Palm Beach in Florida. The house is still occupied by the Kennedys today.

In 1959, Ted Kennedy purchased the adjacent property to his brother's at 109 Irving Avenue. The house has 14-rooms and stands on 1.19 acres, sharing the same garden as JFK's property. In 1961, he sold the house to his brother, Bobby, and his widow continued to divide her time between both there and Hickory Hill almost up until her death.

Several members of the Kennedy clan keep houses nearby, notably on Squaw Island. From 1982 until his death in 2009, Ted made his primary residence at the main house on the compound. After his death, it was donated by the Kennedy family to the Edward M. Kennedy Institute for the United States Senate. In 1972, the compound was designated a National Historic Landmark District and added to the National Register of Historic Places.

The Nine of Us: Growing Up Kennedy By Jean Kennedy Smith

Victura: The Kennedys, a Sailboat, and the Sea By James W. Graham

The Patriarch: The Remarkable Life and Turbulent Times of Joseph P. Kennedy By David Nasaw

The Summer I Met Jack: A Novel By Michelle Gable

Jackie's Girl: My Life with the Kennedy Family By Kathy McKeown