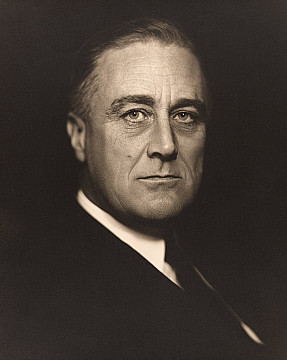 He was preceded in the Presidency by Herbert Hoover. He is the only U.S. President to have served for more than two terms and died in office in 1945 when he was succeeded by his Vice-President, Harry S. Truman.

He was born at Springwood, Hyde Park, New York. He was educated at Groton School and Harvard University. He attended Columbia Law School and became a Member of the New York Bar but was more interested in politics. He inherited his father's Democratic views and was elected to his first public office as New York State Senator (1910-1913). He was then Assistant Secretary of the Navy (1913-1919) before failing in his bid to be Vice-President under James M. Cox when they were defeated in 1920.

He was diagnosed with Polio in 1921 which left him paralyzed from the waist down. Nonetheless, he taught himself to walk short distances and - reflecting the times - for his career he was careful to keep his wheelchair out of the public eye. He was elected as the 44th Governor of New York (1929-1932) before winning the 1932 Presidential Campaign to become the 32nd President of the United States. He won two terms, serving as President from 1933 to 1945 while leading America not only through the worst depression in its history, but also World War II. After the attack on Pearl Harbor (December 7, 1941) he declared war on Japan, and days later Hitler and Mussolini declared war on the United States. He enjoyed a strong working partnership with British Prime Minister Winston Churchill, which has been called, “the partnership that saved the west”.

Roosevelt died while in office. Political scholars and historians view him as one of the three most important Presidents in US history, next to Washington and Lincoln. One of his biographers, Jean Edward Smith, wrote: "He lifted himself from a wheelchair to lift the nation from its knees". In 1905, at Algonac, he married his distant cousin (five times once removed), Eleanor Roosevelt. They were the parents of a daughter and four sons.

Franklin and Winston: An Intimate Portrait of an Epic Friendship By Jon Meacham

Traitor to His Class: The Privileged Life and Radical Presidency of Franklin Delano Roosevelt By H.W. Brands