Built from the early 1870s, for George F. M. Walters. From relatively humble beginnings, this house on a modest hill above the Potomac River shot to fame when it became home to first John F. Kennedy (1917-1963), 35th President of the United States; and, afterwards to his brother "Bobby," Senator Robert Francis Kennedy (1925-1968), the second of two United States Attorney Generals to live there. Aside from gaining a reputation for wild, celebrity-packed parties in Bobby's day, this is also where JFK penned his Pulitzer Prize-winning book and where the "Hickory Hill Seminars" were born. In historical importance, some have compared the estate to Mount Vernon. Only a 20-minute drive from Washington D.C., the 18-room mansion remains a private home....
zoom_in 4 images 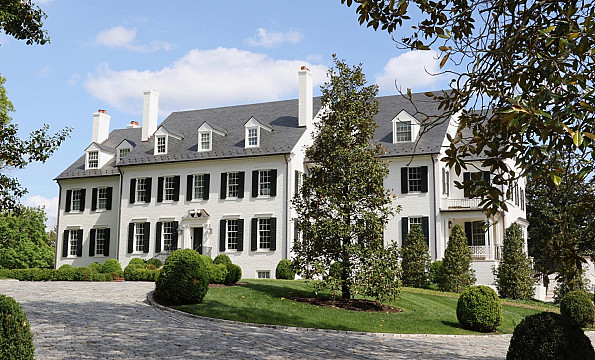 In 1846, Walters, a farmer and carpenter, purchased 88-acres in McLean that included a frame house on the hill. This burned down in 1862 when a servant accidentally knocked over a candle, not - as some rumors claim - that it was destroyed in the Civil War when it was being used by Union General George B. McClellan (1826-1885) as his headquarters!

According to Virginia Living, Walters built himself a new brick house, "handmade from clay dug from the property. Every door, window frame and moulding was handmade on the place". He named his new home "Hickory Hill" for the magnificent 300-year old hickory trees that with the ancient oaks provided shade over its rolling lawns.

Another fire severely damaged Walter's place in 1907. His widow died three years later and as her heirs were unable to choose a successor between them, it was sold by court order in 1916 for $18,000 to "Pat" Speer, a dentist, by which time it included a "large" brick building and barn on 77-acres. Speer lived here with his wife, Susan, but the marriage was not a happy one. Tired of his drinking and womanizing, she filed for divorce in 1922 but in January, 1923, and Pat now took a second wife. But, his reckless lifestyle caught up with him and debts forced him to sell in 1924 and the following year he too was dead.

From Papers, Property & Cars to Politics

Hickory Hill was part of the 169-acres purchased by Frank Lyon (1867-1954), a native of Petersburg who became a lawyer and successful land developer, and for whom "Lyon Park" in Arlington is named. Initially, it was his real estate partner, Lt-Col. Charles Walton Fitch (1886-1964), a great-grandson of the founder of the New Jersey Herald, who lived here with his wife (and Lyon's niece), Margaret Springs Lyon Parham (1888-1966). Eventually, Lyon sold his house across the street and moved into Hickory Hill with his wife, Georgia Hays Wright (1868-1961). The Lyons removed the old-fashioned mansard roof and gave the house its Georgian/Colonial look for which it is recognized today.

In 1936, the Lyons sold up to Leo J. Rocca, of Washington D.C., the first car dealer to advertise on television. He lived here with his wife, Leonora, but their tenure was a short one. According to the official story, flooding at Chain Bridge made it hard for Rocca to continue his business, but their grand-daughter recalled her grandmother saying that the move was due to a lack of staff readily available since the U.S. had entered the War.

It was at Hickory Hill that JFK wrote his bestselling Profiles in Courage (1957), that with his father's influence won the Pulitzer Prize that year. The success of his book was marred when his wife, Jacqueline Lee Bouvier (1929-1994), suffered a miscarriage that prompted the young couple to return to Washington DC, then dividing their time mainly between there and their cottage on the Kennedy Compound at Hyannis Port.

In 1957, JFK sold the house to his younger brother, Bobby Kennedy, who moved in with his wife, Ethel Skakel, and the first five of what would become their eleven children. The JFK's then settled full time in Georgetown before acquiring Glen Ora when he took office.

In 1963, they made improvements to the house, adding a north wing that included a formal drawing room, living room, four further bedrooms and a movie theater - giving the house 13 bedrooms and 12 fireplaces. Also added were two swimming pools (one for adults, one for children), a terrace and a pool house. The renovations took one year to complete. A tennis court had already been built on the property where every morning before work Bobby would play with Robert McNamara (1916-2009), Secretary of Defense.

"Trespassers will be Eaten"

The garden included paddocks, stables and, "the only treehouse in the world that looks as if it were designed by an architect" in one of the giant hickories. Hickory Hill at this time is also remembered for hosting an annual Children’s Pet Show and the famous touch-football games adored by the Kennedys. Behind the apple-red front door, the already bustling household was further enlivened by the addition of the children's horses, dogs, geese, chickens, hawks, reptiles and even a sea-lion at one point! It was a veritable zoo that rivalled Ethel's childhood home, Rambleside. A sign in front of Hickory Hill erected by the children warned: "Trespassers will be eaten"!

In Heymann's biography, RFK: A Candid Biography of Robert F. Kennedy (1998), he reflected that, "while state dinners and gala concerts took place at The White House, the true social center of the Kennedy administration was Hickory Hill. Bobby’s parties were something else". Guests included an endless troop of politicians and more glamorously Grace Kelly (1929-1982), members of the Washington Redskins, and Deborah, 11th Duchess of Devonshire; but, irrespective of who they were in life, at one point or another they almost always ended up in the pool fully clothed in formal attire!

Aside from the frivolities, it was Arthur Meier Schlesinger, Jr. (1917-2007) who suggested regular gatherings at the house of the great minds of the day to meet with politicians and their wives to discuss subjects that usually escaped government. These informal meetings became known as the "Hickory Hill Seminars".

In 1982, Hickory Hill was designated as a contributing property to the Langley Fork Historic District. By the 2004, the once bustling home was empty and Ethel put the house on the market for $25 million, only to withdraw it four years later. In 2009, it was purchased for $8.25 million by Alan J. Dabbiere, the low-profile Chairman of AirWatch. After renovating the house, he lives there with his wife, Ashley, and their four children.

Hickory Hill, McLean, Virginia: A Biography of a House and Those Who Lived There By Carole L. Herrick

American Values: Lessons I Learned from My Family By Robert F. Kennedy Jr.

The Kennedy Wives: Triumph and Tragedy in America's Most Public Family By Amber Hunt & David Batcher