Rebuilt in 1686, for Louis d'Oger (1640-1716) Marquis de Cavoye, the Grand Marshall of the Royal Household at the Palace of Versailles and King Louis XIV's best friend since childhood. In 1679, Cavoye bought the property from the lady for whom he'd fought a duel several years previously and for which he served two - fairly luxurious - years in prison. He completely remodelled the existing structure (built in 1640 for the King's chaplain, Paul Bailly) to the design of Daniel Gittard (1625-1686), one of the most pre-eminent Parisian architects of the era who was also known for his work on the Church of Saint-Sulpice. It was decorated by the Royal architects Jules Hardouin-Mansart and Antoine Lepautre. Frequent visitors during this period included the great playwright, Jean Racine, and the poet Nicolas Boileau-Despréaux. Rescued from ruin and immaculately restored by an American heiress in 1923, it remains a private home and is one of only a handful of such palaces to remain unchanged since the days of the Ancien Régime....
zoom_in 12 images 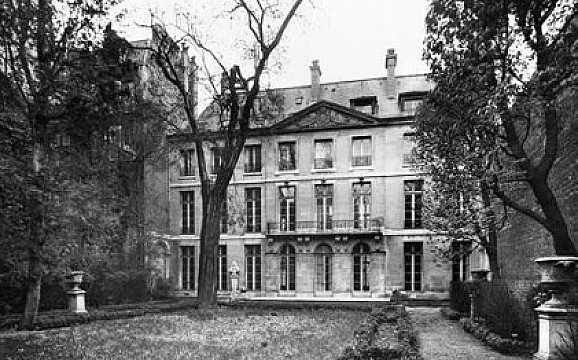 Other than Cavoye and his wife, notable residents here included the lawyer known as "Grotius" and a string of notable women: the Duchesse de Villars, the Marquise de Courcelles, and the Princesse des Ursins. During the 19th Century it changed hands several times but over the years became increasingly less cared for. By the 1920s, its expansive courtyard and gardens had become a dumping ground for refuse and the house was dismissed by locals as "La Ruine de Saints-Pères," divided into apartments that still displayed faded splendor but were cheap to rent as there were no modern facilities.

In 1923, it was rescued by the American heiress Elizabeth Wharton Drexel who bought it from the Comte de Beaufort. She recalled her first visit: "a melancholy affair. Beautiful old rooms with exquisite boiseries, the grande salle-de-fetes in ivory and gold, the gracefully curving stone staircase in the entrance hall, the fine old marqueterie floors, the tall spacious windows - everything had been given over to tenants who seemed to think this was a place merely to afford shelter or to be used as shops. And, as for the garden... surely it had not had the care of a gardener for more than a century! I came away... with the fixed determination to own the old house". She nearly succeeded in paying off all the tenants to leave, but couldn't shift one family who lived over the garage. The family were still there twelve years later in 1935 by which time "Bessie" conceded good-naturedly, "I feel rather sympathetic towards them. I would probably be as immovable".

Bessie was unhappily married to Harry Symes Lehr, a homosexual who admitted he'd married her for her money, and she poured all her love instead into this meticulous restoration project. The panelling in the hall was retrofitted from L'Hôtel Senoch on Rue Bayen and another reception room was redone with panelling from L'Hôtel de Crillon on the Place de la Concorde. Finally, she filled the house with period furniture from Cavoye's time and added her monogram on the pediment above the front entrance. Her famous portrait by Giovanni Boldini was in the library and is now seen at The Elms in Newport

In 1935, she wrote: "My Paris home is an unfailing source of happiness to me. I love it, this mellow old house that has known the joys and sorrows of nearly four centuries. There is something of warmth, almost tenderness in its atmosphere... In this house which has known the happiness of others, I too have found happiness. It has been my privilege to restore it to its ancient glory, to revive its past splendours. In return, it has given me peace... At last I can look back on the past without bitterness... Harry Lehr is dead, so are many who walked along the road with me... These walls within which I live have seen the end of many resentments; so let it be with mine." Despite her marriage the following year to John Beresford, Lord Decies (widow of another heiress, Helen Gould) her happiness was short-lived: In 1940, as the Germans approached Paris, they escaped to London where they both died in 1944 during which time Bessie's beloved home was requisitioned by the Nazis.

Amazingly, the house remained in Bessie's family up until 1980 with the death of her youngest niece, Eva Drexel-Dahlgren, whose mother's home in Newport was inspired by La Lanterne at Versailles. The Hotel de Cavoye is a rare surviving example of the palaces built during the Ancien Régime and it still retains its original layout: reception rooms and library off the grand hall on the ground floor with state apartments on the first floor.
After Eva died in 1980, the hotel - that has a footprint of 6,458-square feet and a 9,526-square foot garden - was purchased for 26.5 million francs by the celebrated fashion designer Hubert de Givanchy (1927-1918) who carefully restored the interiors and gardens. He sold it on six years later (1986) for 100-million francs (circa 26-million euros in today's money) to businessman turned politician and TV personality, Bernard Tapie (1947-2021). In 1993, Tapie was accused of match-fixing when the football team of which he was president (Olympique de Marseilles) won the the UEFA Champion's League and in 1995 - rather like the old Marquis de Cavoye - he was sentenced to two years in prison.

Since then, despite legal bills and other significant debts, Tapie somehow managed to doggedly hold on to his statement townhouse. But, in June, 2021, it was reported that bailiffs were knocking at his doors (literally) and that François Pinault - France's third wealthiest man and father-in-law of Salma Hayek - had set his sights set on buying the 'hôtel particulier' for a reputed 80-million euros. According to Tapie's lawyer, that Tapie was considering the sale was proof that he took the repayments of his debts seriously... Four months later (October, 2021), Tapie died in his sleep at his beloved townhouse.

Love and Louis XIV: The Women in the Life of the Sun King By Antonia Fraser

How to Read Paris: A Crash Course in Parisian Architecture By Chris Rogers

Paris: The Novel By Edward Rutherfurd

Hidden Gardens of Paris: A Guide to the Parks, Squares, and Woodlands of the City of Light By Susan Cahill & Marion Ranoux

King Lehr and the Gilded Age: With Extracts from the Locked Diary of Harry Lehr By Elizabeth Drexel Beresford

The Hotel on Place Vendome: Life, Death, and Betrayal at the Hotel Ritz in Paris By Tilar J. Mazzeo

The Givenchy Style By Francoise Mohrt