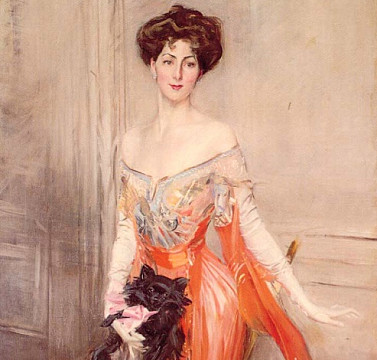 She was the daughter of a pioneering philanthropist; niece of a great banker (Anthony Drexel); and, sister of Lucy, the no-nonsense chatelaine of Champ Soleil. "Bessie" was an heiress who lived at the center of Gilded Age society, with an estimated fortune of $25 million. She was also an author and social commentator, perhaps the best placed of anyone in her era to put pen-to-paper about that American epoque. She was widowed by the age 31. For 28 years she endured her second marriage ("a tragic farce") to the homosexual "court jester" of Gilded Age society, Harry Lehr. He admitted that he'd married her for her money as poverty "terrified" him. During World War I they lived in Paris where Bessie worked for the Red Cross and lovingly restored her home - "My Paris home is an unfailing source of happiness to me" - L'Hotel de Cavoye.

After Harry's death, she published the first of her two books: King Lehr and the Gilded Age (1935). Time Magazine described it, "as memorable for the lurid light it throws on U.S. Society of the Gilded Age... one of the most startling and scandalously intimate records of life among the wealthy". In 1936, she married her third husband, the dashing Anglo-Irish Lord Decies, with whom she once again found happiness. Soon afterwards, she published her second book, Turn of the World (1937) of which the The Pittsburgh Press wrote, "interesting, amusing and sometimes revolting... with evident nostalgia she tells of extravagant parties and fortunes spent for clothes and jewels". After having to escape her beloved home in Paris, she died in London, survived by one son from her first marriage.

King Lehr and the Gilded Age: With Extracts from the Locked Diary of Harry Lehr By Elizabeth Drexel Lehr, Lady Decies

Turn of the World By Elizabeth Drexel, Lady Decies

The Golden Moments of Paris: A Guide to the Paris of the 1920s By John Baxter