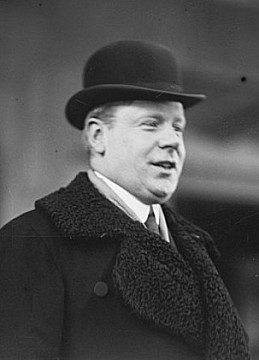 He was born at Baltimore, Maryland, the son of the city's German Consul. It's not clear where he was educated nor when exactly he came to New York, but while still a young man he determined to establish himself among the doyennes of Gilded Age society from which to rule. As Ward McAllister had attached himself to Mrs Astor, Harry Lehr was most famously attached to Mamie Fish, although he was a favorite of both women. From being a leader of cotillons, he began concocting ever more elaborate parties with Mamie who had an abject fear of the mundane. His entertainments shocked and delighted in equal measure, "displaying the originality and daring of a Barnum".

Having once done such a good impression of the Czar of Russia he became known - and was often dubbed by the press - as "King Lehr". His most outrageous parties included a "Dog's Dinner" where 100 pampered pets were dressed up in evening wear and served at foot-high tables, and a dinner party that promised a Prince as the guest of honor only to be replaced by a monkey. He was a talented musician, spoke with a falsetto voice, and while loved by the women in society, for the most part, the men merely tolerated him.

He charmed and in 1901 eventually married a young widow, Elizabeth Wharton Drexel, but when they got back to their hotel in Baltimore instead of consummating the marriage he dropped a bombshell on his wife: "There are some things I must say to you and it is better that I should say them now at the very beginning so that there can be no misunderstandings between us... In public I will be to you everything that a most devoted husband should be to his wife. You shall never complain of my conduct in this respect. I will give you courtesy, respect and apparently devotion. But you must expect nothing more from me. When we are alone I do not intend to keep up the miserable pretense, the farce of love and sentiment. Our marriage will never be a marriage in anything but in name. I do not love you. I can never love you. I can school myself to be polite to you but that is all. The less we see of one another except in the presence of others, the better”.

Unable to divorce her husband at the risk of being alienated by her devoutly Catholic mother, Bessie was trapped in a loveless marriage, dividing their time between New York, Newport, and Paris - a lifestyle that was entirely funded by her $16-million fortune. After Lehr died, Bessie discovered his private diaries in which he confided: "I can never love any woman... Women are actually repulsive to me". He was gay and is generally supposed to have been in a long term relationship with Charles P. Greenough, and in his bedroom he hung a nude painting of Robert Gould Shaw II, the first husband of Nancy Astor.

King Lehr and the Gilded Age: With Extracts from the Locked Diary of Harry Lehr By Lady Decies

Empire: A Novel By Gore Vidal