Completed in 1846, for George Bourne, the owner of a brewery on Saint-Paul Street whose son-in-law lived for many years at the Duggan House. Clumsily added onto over the years and then left derelict and scarred by vandalism, the house has now been restored to its original Neo-classical style and is named for its second owner, Sir Louis-Hippolyte La Fontaine (1807-1864). La Fontaine was the first Canadian-born Prime Minister of the United Province of Canada and the man who is generally regarded as the Father of responsible government in Canada. The restored mansion now stands as a rare surviving example of domestic neo-classical architecture in Montreal....
zoom_in 13 images 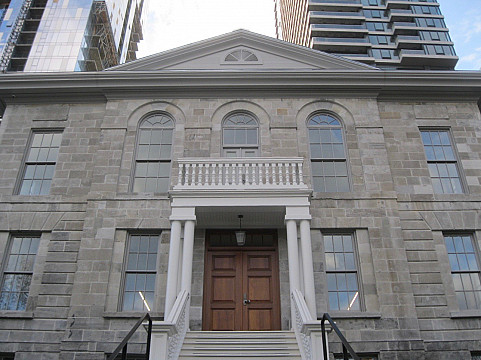 In 1844, George Bourne's success as a brewer enabled him to purchase a parcel of land (Lot 1574) from farmer Joseph-Augustin Cardinal in the Saint-Antoine district of Montreal, "without any buildings thereon erected… planted with fruit trees". Between then and 1846, Bourne constructed, "a large cut-stone front, two story house (over a raised basement with windows) facing south (with an uninterrupted view) towards the River St. Lawrence; stables, sheds, coach house and other buildings thereon erected".

The mansion's facade measures 50-feet across and each of its four exterior walls were originally finished in grey limestone blocks. The property fronted Aqueduct Street (Rue Lucien L'Allier) on which a large pair of wrought-iron gates were put up for carriages and two smaller ones to either side for pedestrian access. The carriage-drive that led through the gardens up to the house was lined with draping Carolina Coffee trees and it ran to a circle in front of the house before leading off to the stables and coach house behind.

The house stood over three floors: the basement contained the servants quarters and kitchens, all directly under the dining room. The first floor was centred by an imitation marble hall surrounded by the drawing room, dining room, master bedroom, dressing room and bathroom. Upstairs were two further bedrooms, a bathroom, and the library.

Sadly for Bourne, he did not get to enjoy his new mansion for long. He was declared bankrupt a short while later and in February, 1849, he sold the house to Lafontaine.

"As the Rabble moved towards the Front Door, Shots Rang Out...."

On April 26, the angry mob that had the day before burned down the Parliament Buildings at Montreal now set their sights on the homes of the Reformers with whom they were so incensed: they damaged Wolfred Nelson's home on the Champ de Mars and the home of Sir Francis Hincks before heading west for Lafontaine's new residence. Having anticipated trouble, Lafontaine had already moved his family to a hotel near the Château Ramezay.

Tearing down the wrought-iron gates at the entrance, the mob marched up to the Lafontaine mansion: They, "smashed woodwork and his costly period furniture, pulled off window sills and shutters, ripped up floors, and shattered china and glass. They set fire to the stables, burned several coaches, and pulled up a dozen saplings from the orchard". The contents of his extensive library was emptied into a pile outside the house and set on fire.

In August, some of the miscreants were arrested, but this had the affect of rousing yet another mob that set out once more to exact further revenge on Lafontaine's home:

The house was dark but (Lafontaine and) a group of his friends including Sir Étienne-Paschal Taché and The Hon. Charles-Joseph Coursol waited behind the shutters with guns. As the rabble moved towards the front door, shots rang out on both sides; before the rioters had fled, six were wounded, and one... dead.

Following these unpleasant events, Lafontaine employed John Ostell (1813-1892) to carry out the repairs to his property. Ostell had designed the Customs House at Montreal in 1838 and it bore a distinct resemblance to the Lafontaine House. This has led architectural historians to believe that Ostell was the architect originally employed by Bourne.

Home to the Lafontaines and Clarkes

Lafontaine's political career took him to Toronto until 1851 when he returned to his home in Montreal. He continued to live there with his family until he died there in 1864. Later that year, Lady La Fontaine sold the property to James Proctor Clarke (b.1822), one of the city's leading merchants and a co-founder of the Montreal Sailor's Institute. In 1865, Clarke employed the architect Richard Cunningham Windeyer (1831-1900) to carry out, "extensive alterations" to the interior of the house. The Clarkes continued to live there until 1870 - the last family to enjoy the mansion and estate in its original splendour.

By 1870, urbanisation had swallowed up the countryside and the house was now part of downtown Montreal. The city's elite who might have chosen to live here a few years before were instead now buying or building homes further to the west on and around the land under Mount Royal on which the McTavish Mansion had once stood. Clarke's mansion was now only attractive to developers and James Sheridan became the new owner

Sheridan was a property developer whose firm had then just started to build a terrace of 11 houses on Aqueduct Street - still seen today on what is now Overdale Avenue. In 1874, he divided the mansion into 12 apartments, changing the face of the facade in the process: Aside from adding a metal balcony under the three central windows on the second floor, the stone stairs that had led up to the original front door were removed and the front door was made into another window. The house was now accessed at basement level which was further excavated to make room for more apartments on what became the ground floor.

An Asset, not a Home

Having ceased to be a family home, the subdivided apartment block instead became an investment opportunity to be added to the portfolios of wealthy landlords: In 1886, Sheridan sold the property to Sir Robert Reid (1842-1908), one of the builders of the Canadian Pacific Railway. Just ten months later, Reid sold it on to the President of the CPR, "his lifelong friend," Lord Shaughnessy, who was then resident at Shaughnessy House. In 1893, it was purchased by Sir Thomas Roddick (1846-1923) who held the distinction of being President of both the Canadian and British Medical Associations.

From 1893 until 1915, there were four further known landlords: W. Wood, Charles Cushing (b.1848), B.B. Lusher and L.P. DeLisle. It was sometime in the early 20th century that the original ridged roof was replaced with the unattractive flat, false mansard roof with five skylight windows. As the area was further industrialised, the apartments within the old mansion were used for social housing. It was not until 1987, when faced with demolition, that Senator Serge Joyal discovered that the house had once been Lafontaine's home, and in a rare turn of events for Montreal, its historical provenance proved its saving grace.

The City of Montreal partially (barely) "restored" it in the 1990s. In 2011, supported by Heritage Montreal, the block was acquired by investors who have now restored it to its 1849 appearance as an important and rare surviving piece of Montreal's political history.

The Hanging of Angélique: The Untold Story of Canadian Slavery and the Burning of Old Montréal By Afua Cooper

A People's History of Quebec By Jacques Lacoursière & Robin Philpot

Taking to the Streets: Crowds Politics and the Urban Experience in Mid-Nineteenth-Century Montreal By Dan Horner