Completed in 1876 for the McIntyre and Brown families, it is named for the Lords Shaughnessy who lived here from 1892 to 1923. It is intimately connected with the principal figures who planned and built the Canadian Pacific Railway (1885), and two of its first three Presidents lived here. This stunning example of French Second Empire architecture was rescued from the jaws of demolition in 1974 by the inspirational architect and preservationist Phyllis Lambert. It's the only residential relict of what was Dorchester Street and is today home to the Canadian Centre for Architecture...
zoom_in 20 images 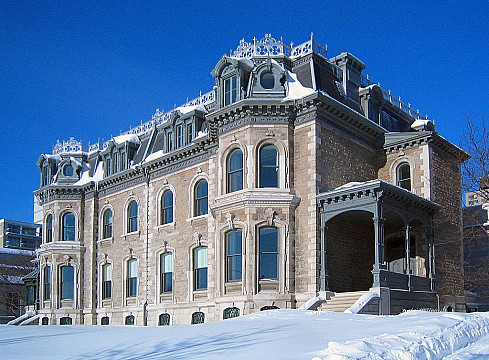 In 1874, the Anglo-Canadian architect William Tutin Thomas (1829-1892) was commissioned to build what appears to be one single residence but is in fact two separate seven-bedroom homes. Built on farmland that belonged to the Sulpician Seminary, its first residents were Duncan McIntyre (1834-1894), Vice-President of the Canadian Pacific Railway (CPR) who took up in the West House (to the left in the photographs); and, one Robert Brown, a similarly wealthy timber merchant who took up in the East House.

This exemplary example of French Second Empire architecture completed in Montreal limestone took two years to build. Its address back then was Dorchester Street, within what would later be dubbed by journalists as "The Golden Square Mile". Once a leafy, residential street, from 1954 it became an 8-lane traffic artery. In 1987, it was renamed Rene-Levesque Boulevard - another sad chip off Montreal's multi-cultural history.

In 1888, McIntyre and his family moved into Cragruie, their new mansion on 10-acres between Pine Avenue and Peel Street. He sold his home of the previous twelve years to his next-door neighbour, close friend, and co-founder of the CPR, Lord Strathcona. The Strathconas wished to use it as a guest house in addition to their own mansion and in 1890 added a small mahogany-panelled library and a semi-circular conservatory.

It was here in 1901 that the Duke and Duchess of Cornwall & York (the future King George V and Queen Mary) stayed as the guests of the Strathconas, though in order to make them more at home he built a connecting corridor between the two houses.

King Edward VII referred to Lord Strathcona as "Uncle Donald" in reference to the millions of dollars he donated to a wide variety of charitable causes across the British Empire. In 1899, he was appointed Canadian High Commissioner at London, taking a townhouse at 53 Cadogan Square while leasing Knebworth House as a weekend home. He also owned two estates in Scotland and with his cousin and best friend (Lord Mount Stephen) also happily ensconced in England, he began to spend less time in Montreal.

It was most likely around 1902 that Lord Strathcona sold the West House to his first cousin, Mrs Eleanora (Stephen) Cantlie (1835-1916), the sister of Lord Mount Stephen (the first President of the CPR), and wife of James Alexander Cantlie (1836-1924).

In 1927, Lord Atholstan (the first grandee in either house not to have played a part in the construction of the CPR!) purchased both the West House from the Cantlie family and with it Lord Strathcona's mansion next door. He converted them into a retirement home for elderly Presbyterians that was given the name "My Mother's Home". The former Cantlie house gradually began to fall into disrepair and in 1940 both the West and East Houses were purchased by the Catholic Women's League. Out went the elderly Presbyterians and in came the young Catholic women who used it as a clubhouse.

In 1882, Sir William Cornelius Van Horne relocated from Milwaukee to Montreal on being appointed General Manager of the CPR, of which he would later be President. Within a matter of weeks, he had purchased East House from the Browns. Van Horne was delighted with his choice and wrote excitedly to his wife, Addie, back in Milwaukee, "it is a very bright and cheerful place and everything about it is nearly perfect".

In preparation for the arrival of his family next Spring, Van Horne personally inspected the painting of the rooms and bought gas light fittings from New York to further modernise it. He directed that Addie employ a professional cabinet-maker to ensure all their possessions - the beginnings of his famous art and ceramics collection - were safely packed for transport to Montreal, while his fossils arrived in several old whiskey barrels.

Van Horne enjoyed entertaining friends, and he pretended he had supernatural powers when in fact he just had an exceptional gift for observation and memory - in today's world he might have been an illusionist! At a dinner party, his "telepathic powers" were called to be tested: He was asked to draw a picture of whatever Lord Mount Stephen had just put to paper on the opposite side of the room. Van Horne later admitted that initially he was at a total loss, until he recalled a conversation with Lady Mount Stephen in which she had revealed that her husband knew only how to draw one thing: a salmon: "I cast a sly eye over to the other end of the room, and saw his hand moving quickly in small circles. The scales! So, I drew a salmon as quickly as I could. And, by jinks, it was right!"

In 1892, Sir William Van Horne upscaled to the Van Horne Mansion on Sherbrooke Street and sold East House to another American, Thomas Shaughnessy (1853-1923), later 1st Lord Shaughnessy who would succeed him as President of the Canadian Pacific Railway (CPR). The year after his grandson, the 3rd Lord Shaughnessy, was born at the house, the 2nd Lord sold the family mansion to Saint Mary's Hospital in 1923.

The 3rd Lord briefly returned to Montreal after having served with distinction in the Second World War and then qualified as a journalist. It was during that time, one festive season, that he got in an argument with a taxi driver and was carted off to the clink for the night and fined $10. The story went that Lord Shaughnessy was dressed as Santa Claus on his way back from a fancy dress party and when asked for his name at the station, the policeman laughed back, "if you're Lord Shaughnessy, I'm Santa Claus"!

Today, the Shaughnessy family are best known for their association with television: Charles, the present 5th Lord Shaughnessy, inherited the title from his second cousin. He is best recognized for having played Shane Donovan on the popular soap Days of Our Lives between 1984 and 1992. He then took the role of Maxwell Sheffield in The Nanny. His father, Freddy (a first cousin of the 3rd Lord Shaughnessy) was the script editor of the hit British TV Series Upstairs, Downstairs which was the precursor to Downton Abbey.

In 1940, the Catholic Women's League purchased both the East and West House. They transformed the East House into a boarding house. In 1963, it was acquired by the Sister's of Service, when its original interior architectural features were lost.

In 1973, the entire house was put up for sale and developers descended like vultures on this piece of prime real estate. This was the same year that the Van Horne Mansion had been torn down when Mayor Jean Drapeau controversially declared it was impossible to protect heritage buildings built by Anglophones for cultural reasons because they were not what he regarded as part of Quebec's culture.

Every proposition put forward for its future involved its destruction. That was until the following year when Phyllis Lambert, a daughter of Samuel Bronfman (1889-1971), stepped in and purchased it outright. She immediately had the property recognized as a National Historic Site (1974) before fully restoring it to it's former glory.

In 1975, Mrs Lambert founded Heritage Montreal in a bid to stop the senseless demolition of so many of the city's historic buildings. In 1979, she founded the Canadian Centre for Architecture and ten years later the Shaughnessy House became its home.