Completed in 1798, for Theodore Lyman I (1753-1839) and his second wife, Lydia Pickering Williams (1763-1826). Designed by the noted Federal architect Samuel McIntire, the 24-room house is still surrounded by picturesque gardens and it's the last surviving example of one his country houses. The house/estate was known familiarly as "The Vale" and remained in the Lyman family for just over 150-years. Theodore Lyman and his descendants were enthusiastic horticulturalists and the greenhouse he built here (the earliest surviving example in America) was kept warm throughout the winter by a wood fire, allowing lemons, orchids, camellias, grapes, apricots etc. to grow year-round. It neighbors Gore Place where Theodore's second son lived and today, operated by Historic New England, the house and gardens are open to the public....
zoom_in 19 images 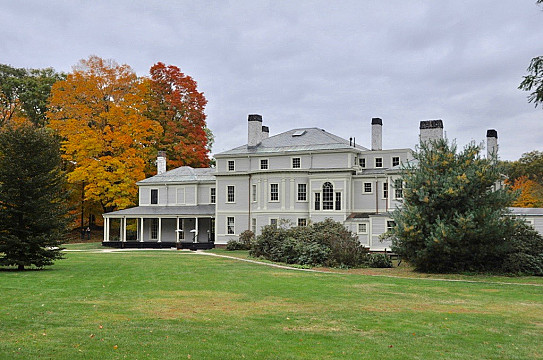 Theodore Lyman got his break in Maine when his popular employer, Waldo Emerson, dropped dead and Mrs Emerson succumbed just months later leaving their 14-year old daughter, Sarah, all alone in the world, and very wealthy. Lyman promptly married her, used the money to the build himself a small fleet of ships to engage in the West India Trade, and never looked back. After Sarah died in 1786, two years later he made another fortuitous marriage when he wed Lydia Pickering Williams, niece of the U.S. Secretary of State Colonel Timothy Pickering. They moved to Massachusetts permanently from 1790 where Lyman cemented his fortune in the East Indies/China Trade. Having established his new family in Boston, in 1793 he bought this 450-acre estate as their summer home.

In the same year as purchasing the land, the Lymans employed the builder-carpenter Samuel McIntire - who was as well-known for his elegant interiors as he was for his dignified exteriors - to design their new home. McIntire had made a name for himself in Mrs Lyman's native Salem and in keeping with what he was known for, he built them a Federal-style mansion with a pair of connected wings influenced by the "Innovative planning" of Charles Bulfinch - "America's first native-born architect".

They named their new home "The Vale" for its situation, set in a vale between a wooded rocky ridge to the north and a swift moving brook on the south. Aside from a working farm, the gardens were landscaped by the English-trained gardener, William Bell, in the English picturesque style of Humphrey Repton, incorporating woodland and a deer park.

The greenhouse was built sometime before 1800 and is thought to be the oldest of its kind in the country. The grape house was built in 1804 for growing exotic fruits such as oranges, pineapples, and bananas, but today it houses grape vines grown from cuttings that were taken in 1870 from Hampton Court in England. The Camellia House was built around 1820 for the camellias that were introduced to America in 1797. Many of the Lyman camellias seen today are more than 100 years old. Also of note is the 600-foot long brick peach wall and late 19th century rhododendrons and azaleas planted by the Lymans.

The house stood as Theodore Lyman intended it until 1883, when his grandson, Arthur Theodore Lyman employed the firm of Hartwell, Richardson and Driver to give it a Victorian facelift. In 1917, two years after he died, his son, Arthur Theodore Lyman Jr., removed his father's fanciful additions and gave it its present Colonial-Revival look. Two of McIntire's original rooms survive in tact: the oval drawing room and the spectacular 2-story ballroom which featured in the movie adaptation of Henry James' The Europeans. More recently (2019), the Lyman Estate was used for the filming of Greta Gerwig's movie adaptation of Louisa May Alcott's Little Women.

The Vale remained in the Lyman family for four generations. After the death of Mrs Susan (Cabot) Lyman in 1951, the family fortunes took a tumble as the textile industry they were so heavily invested in dried up. Mrs Lyman's five children gifted the house and immediate gardens to what has since become Historic New England. The remainder of the estate was nearly sold to housing developers in 1962 but was purchased at the last minute by Bentley University for $365,000 who continue to occupy most of the land. The house and gardens are still operated by Historic New England and are open to the public.

Guidebook to Historic Houses and Gardens in New England: 71 Sites from the Hudson Valley East By Willit Mason