Completed in 1906, for Oliver Gould Jennings (1865-1936) and his wife Mary Dows Brewster (1871-1964). Osborn Hill on which the mansion sits was described at the time as, "one of the loveliest and most attractive places on the sea coast of New England," but it was also once home to a "rabid Tory" who disappeared mysteriously and the site of "strange tales of Indian rites, customs and conflicts". It later became part of Fairfield University and was renamed McAuliffe Hall, but today its future is unclear....
zoom_in 10 images 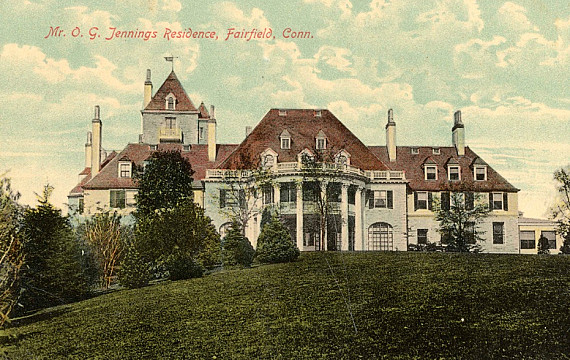 Oliver G. Jennings was the 8th generation of his family to live at Fairfield and his great-grandfather, Captain Isaac Jennings (1743-1819), served as a Member of Legislature. However, their millions were first established in San Francisco where Oliver's father (in partnership with Oliver's father-in-law) had gone to open a mercantile store that supplied mining camps during the Gold Rush. His good fortune continued when he co-founded Standard Oil with his wife's brother-in-law, William Avery Rockefeller Jr., receiving 1,000 of the original 10,000 shares. In 1893, Oliver's father left a will valued at $10 million plus his shares in Standard Oil. Oliver himself was a worthy addition to the boards of several influential companies and he was elected to the Connecticut House of Representatives.

Oliver Gould Jennings had some interesting family connections: aside from being a nephew of William Avery Rockefeller Jr., he was a cousin of the legendary Robber Baron, Jay Gould (1836-1892); and, he was the maternal grandfather of Hugh Dudley Auchincloss Jr., who is remembered today as the stepfather to both Gore Vidal and Jackie Kennedy.

Starting off with a Bang

This house is said to be the second mansion built by the Jennings, on the same spot, and the first was said to have replaced an older one - perhaps the home of the "rabid Tory" who came to a mysterious end. However, it is more likely that this one is a significant expansion of the original, on which work was started in 1896. Back then, all was going well until one of the carpenter's was thrown off site and vowed his revenge. Sure enough, with only five weeks to go until completion in 1897, an explosion ripped through the rear facade destroying two large pillars (where the dynamite had been packed) and blowing out all the windows. Splinters from the explosion were found 300-feet away!

When completed in 1906, the 40-room mansion was reputed to have cost $1 million, designed by the architects Flagg & Chambers, who also designed their townhouse. It sat on top of Osborn Hill overlooking an estate of 120-acres that encompassed rolling hills of field and forest. Jennings took a keen interest in agricultural affairs, though he was under no pretence that his farm at Mailands was a luxury rather than a viable business. Nonetheless, the farm and its vast complex of greenhouses kept both of their mansions (the other being their townhouse at East 72nd Street in Manhattan) supplied with meat, vegetables and flowers throughout the year. He also kept a herd of Jersey cattle and Jennings' was particularly proud of his bull, the amusingly named "Interested Laddie"!

In the summer of 1915, Jennings was being driven by his chauffeur at Westport, Connecticut, when his bad driving forced an oncoming motorbike with side buggy off the road and into a telegraph pole. Those in the crash were a family: Simon J. von der Linn was a waiter at the Hotel McAlpin and he'd been taking his wife and their 3-year old daughter out for a drive. The little girl was badly hurt as well as being partially paralyzed and her parents successfully sued Jennings for $10,000 in damages.
McAuliffe Hall, Fairfield Univeristy

Oliver Jennings died in 1936. His widow and two sons kept Mailands as a summer home for five more years before selling the house and 76-acres for $43,879 to the Society of Jesus. The Jesuits established Fairfield Preparatory School and Fairfield University and Mailands was renamed McAuliffe Hall, housing offices and the School of Engineering. Today, the semi-circular portico is gone and the future of the building is undetermined.