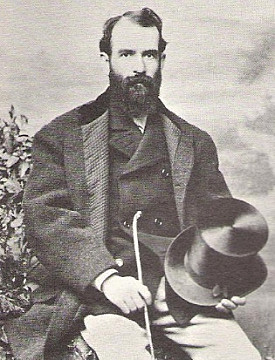 He was born at the Gould Homestead near Roxbury in the Catskills, New York. He was a sickly child who detested farm-life but whose intelligence was immediately obvious. He taught himself surveying and at age-15 left Roxbury having secured his first job helping to map Ulster County, making an extra dollar on the side for every house on which he made a "noon mark" by which the occupants could accurately keep time. He worked on the Delaware County map and in the same year (1856) that he published the "History of Delaware County & Border Wars of New York," he opened a tannery in Pennsylvania and established a work camp that became Gouldsboro.

After the Panic of 1857, Gould purchased cheap stock in the Rutland & Washington Railroad which placed him in control of the company. He left Pennsylvania with $80,000 and moved to New York City in 1859 where he would cement his reputation as one of the most duplicitous, corrupt, and ruthless of all the "Robber Barons". He continued with speculative investments in railroads and transformed the fortunes of the Rensselaer & Saratoga Railroad. Coupled with speculating in gold, he was a millionaire by 1865.

In 1867 James Fisk added him to the board of the Erie Railroad with Daniel Drew in order to out-hustle the ambitions of Cornelius Vanderbilt. In what became known as the "Erie War," the trio recruited "Boss" Tweed whose political ties to Tammany Hall authorized the issue of watered-down shares that Vanderbilt lost $7 million on in his failed attempt to buy them out. Gould emerged as President before he and Fisk later bankrupted Drew.

In 1869, Gould and Fisk contrived to corner the Gold market: their aim was to drive up the price of wheat so that western farmers would sell which would result in more freight moving east and therefore skyrocket the profits of the Erie Railroad. Gould paid off President Grant's brother-in-law to get inside information and bribed members of the New York legislature before putting their plan into action. The ensuing panic on what became known as "Black Friday" ruined thousands both rich and poor, and among his more notable victims that day was LeGrand Lockwood. The resulting public outcry forced Gould to relinquish control of the Erie Railroad, but he was now worth $25 million.

In 1873, Gould got a taste of his own medicine when he approached a conman posing as one "Lord Gordon-Gordon," supposedly on the look out for land on which to settle his clansmen. Gould bribed him with $1 million in railroad stock which the "Lord" promptly cashed. Having escaped to Canada, Gould - with the help of several future Congressmen - caught him but they were arrested for kidnapping before reaching the border. After a tense diplomatic standoff, Gould and his cronies were released and the Lord ordered back to the U.S. Before that happened, Gordon held a lavish party and then shot himself.

Making it Out West

Having lost the Erie Railroad, he turned his attention west and by profiting from another crash in the market - the Panic of 1873 - by 1874 he owned a controlling share in the struggling Union Pacific Railroad. His first move to increase its profits was to cut the pay of the Chinese workforce to less than a dollar/day. Having acquired several more railroads in the region, by 1881 he owned 15,800-miles of railroad track, which was about 15% of the country's total rail mileage. By setting his own rates his fortune grew again and in 1882 sold out of the Union Pacific to build a new system from the Missouri Pacific Railroad which by 1890 constituted about one-half of all the rail track in the Southwest.

In 1881, he bought the Western Union Telegraph Company having weakened it through competition with several smaller companies beforehand. Five years later, in 1886, he made his last big splash, adding the Manhattan Elevated Railroad to his portfolio which enjoyed a monopoly over all of New York's elevated railways. He died in 1892.

He was married in 1863 to Helen Day Miller and they had six children. They lived between a relatively modest mansion (comparative to his wealth) at 579 Fifth Avenue and a magnificent country estate, Lyndhurst. Despite Gould's total lack of empathy towards investors and rivals alike, in private he was a devoted family man. When he died, the appraised value of his estate for tax purposes was $85 million, but he was more likely worth $125 million. He left not a cent to charity, but divided his fortune in equal shares between his six children to be held in trust from which they would receive the residue.

Jay and Helen's six children: (1) George Jay Gould, was placed in charge of managing the inheritance left to himself and his siblings, but despite inflation and the golden years of the Gilded Age what was $85 million in 1892, shrunk to $50 million by 1923 (2) Edwin Gould lived modestly and gave over $5 million of his $15 million share to charity (3) Mrs Helen (Gould) Shepard, though devoted to her father, she sought to right his wrongs and gave away over half of her fortune to charity (4) Howard Gould wasted 9-years, $1.7 million and an embarrassing divorce building Hempstead House on Long Island (5) Anna Gould, was first married to the vain and effete Marquis de Castellane who in eleven years managed to devour his way through $10 million of her capital (6) Frank Jay Gould, who became a well-known hotelier and developer in the South of France.

The Robber Barons By Matthew Josephson

The Edge of Anarchy: The Railroad Barons, the Gilded Age, and the Greatest Labor Uprising in America By Jack Kelly