Completed in 1913, for J.P. Morgan Jr. (1867-1943) and his wife, Jessie Norton Grew (1868-1925). Their 57-room Neo-Georgian country home enjoyed a breathtaking view over Long Island Sound from its enviable seat on the North Shore. It was designed by Christopher Grant LaFarge on East Island at Glen Cove that neighbored the home of Jack's son, Salutation, on West Island. The islands are said to have inspired the Gatsby islands of "West Egg" and "East Egg". The original estate of 140-acres was particularly noted for its magnificent gardens and the mile-long tree-lined driveway that burst to life in Spring with daffodils. After a would-be assassin shot Morgan twice in 1915 the bridge connecting it to the mainland was given a permanent guard....
zoom_in 10 images 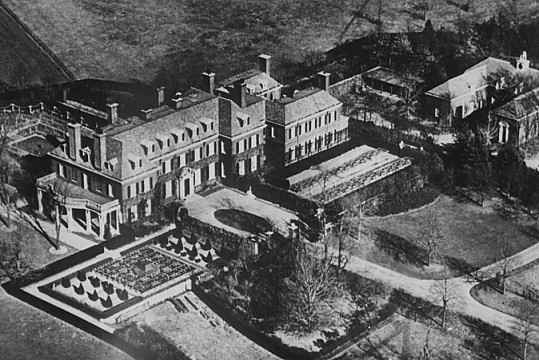 Jack Morgan was the only son of "America's Greatest Banker" J.P. Morgan. He purchased the East Island estate in 1909 from the heirs of the late Leonard Jacob, a native of the Isle of Wight. Siting his new home at the tip of the island known as "Matinecock Point," its unclear if the Morgan mansion replaced or perhaps incorporated Jacob's earlier mansion.

Morgan hired the architectural firm of LaFarge & Morris to build his 57-room (plus 18-bathrooms) home, which served as his principal residence. It had 14-foot ceilings, reception rooms that each measured roughly thirty-by-thirty feet, marble fireplaces and sinks, carved moldings, a small gymnasium, and secret panels hidden in several walls. LaFarge also laid out stables, cottages, outbuildings plus an extensive farm complex for Morgan's prize-winning herd of Blue-Ribbon Jersey cattle, chickens, and hothouse flowers. The gardens were planted with all sorts of exotic trees and flowers, and even up until the 1970s orange trees could still be found on the lawns. Taken as a whole, the bill for the construction of the Matinecock Point estate came in at $2.5 million.

The Spoils of War and a Would-be Assassin

Having succeeded his father as head of J.P. Morgan & Co. in 1913, Jack used his personal friendship with the British Ambassador to the United States, Cecil Spring-Rice, to secure a deal whereby his firm became the sole munitions and supplies purchaser for the British and French governments throughout World War I. Aside from the interest on a $500-million loan, the firm took a 1% commission on $3-billion of purchases, and by 1916 the British were entirely dependent on unsecured loans from Morgan for further purchases.

So it was in July, 1915, that Morgan was entertaining Cecil Spring-Rice at Matinecock when a man forced his way passed the butler and in through the front door. Morgan and Rice threw themselves on the intruder who was bearing two guns and had several sticks of dynamite inside his jacket. In the struggle, two shots went off catching Morgan in the hip and the abdomen. Once the situation had been brought under control it transpired that the would-be assassin was one Eric Muenter, a former German instructor at Harvard who was already wanted in Massachusetts for the murder of his pregnant wife. He maintained he had only wanted to take Morgan's wife and children hostage until Morgan arranged the end of the war, but this didn't tally with his other actions which included exploding a bomb that destroyed a reception room at the U.S. Senate, fortunately without injury.

In Morgan's day the estate could only be accessed from the mainland by passing over a narrow  stone bridge that he had transported here by barge after the old Harlem bridge in Manhattan was taken down. He lived here for most of the year, in theory alone after his wife died in 1923, long after all his children had grown up. But, the place was rarely quiet with a constant stream of friends and family passing through, not to mention the servants, farm staff, security guards, as well as twenty four full-time gardeners.

By the time Jack died in 1943, the estate had been reduced to 73-acres. He left it in equal shares to his two sons, Junius and Henry, and although jack was no longer, most of his servants remained on the estate and in the mansion itself there continued to live, "two British refugee children and a nurse and governess". Presumably having made arrangements for those living there, the following year the Morgan brothers sold it for a mere fraction of what it had cost to build. In 1944, Joseph Miller, a Beverly Hills real estate developer, bought it from the Morgans for $120,000 before flipping it on just a matter of weeks later for $175,000 to Philip Publicker, of Philadelphia.

Publicker planned to maintain the mansion and 25-acres of gardens before subdividing the remaining land for a housing development. While he battled with planning restrictions, he leased the mansion to the Soviet Union as a retreat for between 60 and 80 Russian diplomats serving with the United Nations. The moved was not looked upon favorably by the island's other residents, but that was nothing to what they felt when the Russians announced they wished to buy the house in order to convert it into a "ranch-type recreation center," hiring architect Edwin Kline to come up with the plans.

The Lord Giveth, and the Lord Taketh Away...

In the meantime, Publicker's plans for development had hit a brick wall and after he failed to pay a $26,000 tax bill in 1949, the property was taken over by the City of Glen Cove. In 1950, the estate was put on the auction block and although the Russians were the highest bidders, their bid was blocked by Morgan's lawyers who eventually donated the estate to the Sisters of St. John the Baptist. In the meantime, it sat empty when it was discovered that: "Inside the house imported velour draperies hang in tatters, damask wall coverings have been pulled off and gold leaf framing and embossed panels have been marred".

Now, in case you've read the ghost story that does the rounds concerning this house and first surfaced around about this time - spoiler alert: the Morgans never had a daughter called Alice, let alone any child that died in childhood of typhoid. If a ghost of a little girl was spotted here, it was not 'Alice Morgan' - she never existed in the first place.

The remaining land was partially developed during the 1950s and the nuns remained here until 1971. That year they placed it on the market for a million dollars, having agreed with the 80 families living on the island that they would not sell to any commercial or institutional buyers. The nuns stuck to their words, but after knocking the price down to $850,000, the buyers ran it to ruin. What remained of the land was broken and sold off piece by piece, until only the run down old mansion was left standing. Still too well-constructed to be taken down by a wrecking ball, it was brought down with dynamite.

Today, the backyards of three modest suburban homes occupy the land on which Jack Morgan's mansion one stood, but the dairy complex and several cottages still stand, as Morgan's lasting legacy to the island he called home for thirty years.