First built from circa 1738, for the widowed John Williams (1690-1748). The house as seen today is in fact just the south dependency, ie., one of the two smaller buildings either side of (but not connected to) what was the three-story mansion completed by Williams' son-in-law, Henry Middleton (1717-1784), 2nd President of the Continental Congress. The main house and its north dependency were destroyed beyond repair during the Civil War and what remained was flattened by the earthquake of 1886. Thereafter, much of the exquisite antique furniture was removed to Hey Bonnie Hall in Rhode Island. However, the spectacular gardens that Henry Middleton began to lay out are still very much in tact today and are in fact the oldest landscaped gardens in the United States. Today, Middleton Place operates as a house museum and events venue; and it was used as the backdrop to the British officers ball in the film The Patriot (2000)....
zoom_in 20 images 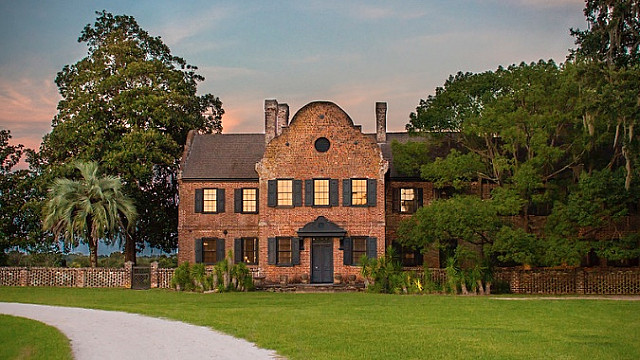 Arthur Middleton, Signer of the U.S. Declaration of Independence

Williams Middleton, Signer of the South Carolina Ordinance of Secession

John Williams (1690-1748), a Welsh planter, acquired this plantation on the Ashley River  in about 1712, either from Richard Godfrey (who had acquired it from the first European owner, Jacob Wayte) or John Cattell who was thought to have been a relation of sorts by marriage. Either way, in 1741 Williams' daughter, Mary, married Henry Middleton (1717-1784) and her dowry included both the house and plantation. When Williams died without a male heir, he in fact willed the plantation not to Middleton, but to his daughter with the stipulation that ultimate ownership would in turn pass to Mary's first born son.

The Most Ambitious Landscaping Plan Ever Seen in America

From 1741, Henry Middleton set about making the plantation both profitable and a suitable home for a man of his standing. In 1755, he added dependencies to either side of the three-story mansion in order to accommodate his vast library while also allowing for more guest bedrooms. But, most notably, through the labor of 100 slaves Middleton orchestrated the most ambitious landscaping project then ever seen in the Americas, laying the terraced lawn that drops down in stages to the elegant butterfly lakes set within the Ashley River. Coincidentally, Henry's nephew's house in England, Shrubland Park, is also known for its spectacular descending terraces, though laid out in the 1850s.

On Christmas Eve, 1763, Henry made a formal gift of Middleton Place (as he had named his rice plantation) to his eldest son, Arthur Middleton (1742-1787), then freshly returned from his education in England. The following year, Arthur married Mary Izard (1747-1814) and Henry allowed the young couple free reign at Middleton Place by retiring between a small country house and his townhouse at 69 Broad Street in Charleston.

Arthur is perhaps best remembered for signing the U.S. Declaration of Independence and for helping to design the state seal of South Carolina. He retired from Congress in 1777 and returned home to run Middleton Place. In 1778, the British forces had taken Savannah and set their sights on Charleston. The women and children in Arthur's household fled to safety at the Hampton Plantation, whereas Arthur helped defend Charleston. When it too fell, Arthur was taken prisoner and held captive for a year while Middleton Place was looted and vandalized by British troops, though it was spared the torch. When Arthur returned in 1782, he spent the last five years of his life repairing his plantations.

Arthur was succeeded by his eldest son, Henry Middleton (1770-1846). Henry continued family tradition by entering politics and was appointed state senator and 43rd Governor of South Carolina. From 1820 to 1830, he lived in Russia as the U.S. Minister. On returning to Carolina, he became a leader of the Union Party. At Middleton Place, Henry pursued his passion for horticulture and imported a wide variety of exotic plants and flowers that transformed the gardens and greenhouses. He also experimented with farm animals, bringing over water buffalo from Constantinople which were well-suited to the muddy terrain in which the rice was grown on the plantation.

The Civil War & the Mansion Torched

Henry and his wife, Mary Hering (1772-1850), were the parents of ten children who lived to adulthood. On his death, it was their fifth son, Williams Middleton (1809-1883), who remained at Middleton Place. But, whereas Henry had been a leader of the Union Party, Williams supported the Confederacy. In 1865, in the final months of the Civil War, a detachment of Sherman's army ransacked the plantation and put the mansion to the torch by way of punishment. Only the south dependency was left standing. Williams repaired it with money borrowed from his siblings and lived there until his death.

Alicia Hopton Middleton (1849-1938) was a great, great-granddaughter of the first Henry Middelton (1717-1784). She moved with her mother to Hey Bonnie Hall in Rhode Island which contained some of the treasures that had once filled Middleton Place. From there, she wrote her memoirs, which included a description of Middleton Place before the War:

The walls of the library above the wainscot were lined with well-filled bookshelves; below were closets and drawers filled with rare of works, watercolors of unusual size, priceless engravings, exquisite miniatures, and other treasures, ten thousand in all, it was said, the collection of many generations of travel in Europe and distant lands.

When Williams died in 1883, he bequeathed Middleton Place to his widow, Susan Pringle Smith (1822-1900). Three years later an earthquake flattened the final vestiges of the ruined mansion and north dependency, but amazingly the south dependency survived in tact. The Middletons had two children: Their son lived in England and had no desire to return so Susan left the plantation to their daughter, Mrs Lily Heyward (1849-1915).

Lily and her husband made their home elsewhere but stayed at Middleton Place during part of every year doing what they could to maintain its upkeep. On her death, she willed the property to her cousin J.J. Pringle Smith (1887-1969), being a descendant of Henry Middleton (1717-1784) through both his mother and his father: His parents were first cousins, both being grandchildren of Henry Augustus Middleton (1793-1887).

"The Most Interesting & Important Garden in the United States"

J.J. and his wife, Henningham Lyons Ellett (1888-1957), made Middleton Place their winter home from October to April of every year. They dedicated their lives to the meticulous restoration of the gardens, bringing them back to how they had appeared in the 18th century. They opened them to the public from the late 1920s and by 1941 their untiring work was recognised by the Garden Club of America when they called it "the most interesting and important garden in the United States".

In 1970, the property was left to their grandson, Charles Henningham Pringle Duell, who co-founded the Middleton Place Foundation that continues to manage the property as a house museum and events venue. The Foundation has also carried out extensive research to document the thousands of African-American slaves who lived and worked there.

A New World Gentry: The Making of a Merchant and Planter Class in South Carolina, 1670-1770 R By Richard Waterhouse. Foreword by Charles Joyner

Stolen Charleston: The Spoils of War By J. Grahame Long

Historic Charleston and the Lowcountry By Steve Gross & Susan Daley

The March: A Novel By E.L. Doctorow

City of Heroes: The Great Charleston Earthquake of 1886 By Richard N. Cote