Built from 1808 and completed for William DeWolf (1762-1829) and his wife Charlotte Finney (1764-1829). It was designed by Rhode Island's pre-eminent architect of the period, Russell Warren (1783-1860), who in the same year built "The Mount" for William's brother, James - though he is perhaps best remembered for Linden Place which he built for William's nephew. The mansion overlooked the harbor at Bristol and was built in the style of a Plantation House of Virginia or Maryland. It was filled with rare and exquisite antiques that had belonged to Henry Middleton (1717-1784) at Middleton Place in South Carolina, whose descendants relocated here in 1890....
zoom_in 10 images 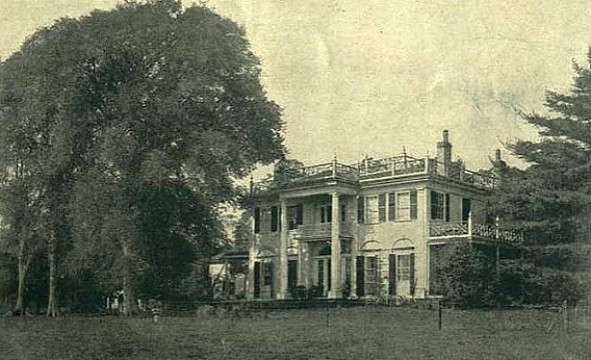 The beauty of the mansion and its melodic name hid the dirty money with which it was built: William and his brothers were slave traders and pirates who flouted both state and federal law by continuing their inhumane business long after slavery had been banned.

William DeWolf owned a 160-acre farm on Papoosesquaw Neck at Bristol that was known in the family as the "Old Farm". He enlarged and embellished the original farm house before making it his home. In 1808, his eldest son, Henry DeWolf (1785-1857) married Annie Marsten (1785-1869). That same year, Henry started to build them a family home on the farm at Poppasquash Point in a collaboration between his wife and the architect Russell Warren (1783-1860). But, "unable from business embarrassment to complete it" William exchanged houses with his son and finished it as to the original plans.

The house was approached by a long avenue lined with oaks. Two Corinthian columns the same height as the house supported the roof over the front portico. The central portion of the house was flanked by a pair of wings that were connected to the main house by hyphens. One wing contained the carriage house and harness room, the other was made up of the kitchens and servants quarters. In one of the connecting hyphens was the "well room" so named for the well of pure spring water directly beneath it. In all, the house measured 140-feet across with verandahs overlooking the lawns on either side.

The entrance hall (pictured) was 20-feet in length and doubled as a living room. The groined arch was designed specifically for Mrs Middleton. Either side of the hall were the large double drawing rooms hung with wallpaper showing birds of paradise in brilliant plumage, and each leading to its own terrace. From the hall, a solid mahogany staircase with a breadth of five feet led up to the broad landing on the first floor.

The house was particularly notable for its furniture and paintings, much of which came from the early 18th century plantation house, Middleton Place in South Carolina. The 17th and 18th Century furniture included works by the likes of Hepplewhite, Sheraton and Chippendale; some of the silver in the dining room bore the Mackenzie crest of Lady Mary Mackenzie (third wife of Henry Middleton) and other pieces dated back to the 14th century; display cabinets were filled with porcelain crafted by Lowestoft, Chelsea and Sevres; the walls had original portraits by Gilbert Stuart and Benjamin West (including that of Alicia's great-grandfather, Thomas Middleton of The Oaks); and, an exquisitely decorated French Piano imported for Alicia Middleton, above which hung the most prized painting: "The Madonna" by Francesco 'Parmigianino' Mazzola (1503-1540).

It was Mrs Anna Middleton who gave the house its curious name of "Hey Bonnie Hall". When she was younger, she used to sing an old Scottish song called "Hey The Bonny Breast Knots" over and over again to delight her grandfather, William DeWolf (1762-1829). On moving to South Carolina with her husband she gave the same name to one of their plantations down there before transferring the name to her new home at Bristol.

On Mrs Middleton's death in 1908 she left her home to her two unmarried daughters, the Misses Anna Elizabeth Middleton (1847-1928) and Alicia Hopton Middleton (1849-1938). Alicia outlived all her siblings and as per her mother's will left the house to one of her nieces or nephews. But, the Hurricane of 1944 that struck Bristol caused irreparable damage to the old house when the front portico roof was blown straight off and over the house. The damage was too expensive to repair and that year it was demolished.

Classic America: The Federal Style and Beyond By Wendell Garrett

The Last of the Moon Girls By Barbara Davis