Completed in 1905, for R. Livingston Beeckman (1866-1935) and his first wife, Eleanor Thomas (1878-1920). Situated midway between 66th and 67th Streets, their 5-story, 20,000-square foot townhouse may appear narrow on first glance (sporting a diminutive 30.5-feet waistline), but it stretches back 125-feet and according to the Landmark Trust is one of the finest remaining examples of an unspoilt Gilded Age mansion on Fifth Avenue. It was designed by the noted firm of Warren & Wetmore and was last privately owned by Emily (Vanderbilt) White before becoming home to the U.N. Mission of Serbia and Montenegro. It was placed on the market in 2016 for $50-million....
zoom_in 3 images 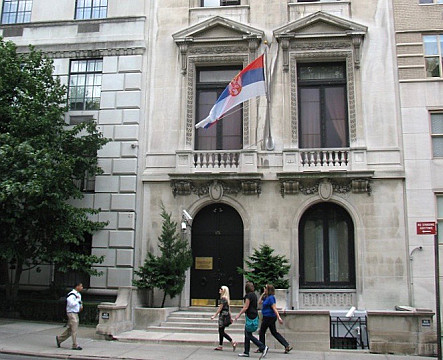 Mrs Beeckman's father died in January, 1903, leaving her half of his estimated $20-million estate accrued through railroads, iron and coal. Having married "Livy" the previous year, they didn't waste anytime making themselves comfortable: In April, 1903, "Nancy" (as she was known) paid $325,000 for Wallace C. Andrews' brownstone at 854 Fifth Avenue; in June, she shelled out another $122,500 for Land's End, her husband's former childhood home at Newport, R.I.; and, by October, she had hired Warren & Wetmore to replace the Andrews' brownstone with a new 5-story house over a basement at a cost of $60,000.

Despite its narrow hips (30.5-feet width), there is no shortage of Beaux-Arts booty on display within its 32-rooms over 5-floors. There are 8-bathrooms; two electric elevators; all of its 17-original marble fireplaces; the original stove that still works in the kitchen; painted frescoes; gilded moldings; and, beautifully hand-carved marble balustrades.

Thaw for the Love of Art

Livy had been a successful stockbroker on Wall Street when he was encouraged to enter politics. In 1908, he was elected to a four-year term as State Representative from Newport in the Rhode Island General Assembly. From 1912 to 1914, he served as State Senator and from 1915 to 1921 he was Governor of Rhode Island. Moving to Providence from 1908, the Beeckmans leased their home fully furnished to Benjamin Thaw, brother of Harry who literally shot his way into the headlines when he killed the famous New York architect, Stanford White, in a fit of jealous rage that rocked Gilded Age society to the core.

The Thaws had bought 1046 Fifth Avenue just the previous year but as their principal residence was still in Pittsburgh a change of tax laws prompted them to sell 1046 and rent 854. Its lofty marble hall provided a perfect backdrop for Mrs Thaw's collection of Italian Renaissance sculpture, pieces of which she often lent to various exhibitions at the Met.

Blowing the Minds of the Masons

The Thaws moved out in 1911 and the next people to move in were George Grant Mason and his wife, Marion Peak. George's fortunes saw a dramatic turnaround in 1907 after his childless uncle, Jim "Silent" Smith, fell victim to a tooth infection on his honeymoon while sailing to Japan. George - who up until then had been a railroad foreman in rural Wisconsin - now found himself with $12-million and a house in Tuxedo Park complete with a retinue of servants. He wasted no time in quitting his job and immediately moved to New York but his wife wasn't quite as enthusiastic as he was to leave Wisconsin. When questioned by the press on the subject, she replied: "I don't know whether I care to live in New York. Most of my friends live in the west, and, well, that remains to be seen".

If his wife was reticent, George's wishes won out and from 1911 they divided their time between here and his uncle's old home in Tuxedo Park where today's George Grant Mason Elementary School is named in his honor. They leased the house on Fifth Avenue fully furnished in September 1911 before buying it outright for $725,000 the following February (1912) as Livy moved permanently to Rhode Island on taking his seat in the State Senate.

Soon after coming into their fortune, the Masons came across Mark Twain who was intrigued by Mrs Mason being a Christian Scientist and "engaged her in spirited conversation". An observer recalled that Twain pointed out that, "God isn't good in single instance and those two Masons sat amazed and enchanted and horrified. He (Twain) said things the like of which they had never even imagined a person could say". Nonetheless, they ingratiated their way into New York society and it was in the Drawing Room at 854 that their daughter married Samuel Sloan Colt, President of the Banker's Trust, while their son co-founded of Pan-Am Airways -as his wife "cavorted" with Hemingway.

Downsizing from the Vanderbilt Triple Palace

The Masons made "extensive alterations" to the house and lived here until 1925 when they sold it for $450,000 to Mrs Emily Vanderbilt White when their neighbors were Judge E.H. Gary and Mrs Horace Havemeyer . Since 1883, Emily had lived with her first husband (William D. Sloane) in one the north half of the Vanderbilt Triple Palace. Sloane died in 1919 and the following year Emily remarried the former U.S. Ambassador to France and Italy, Henry White. In 1926, she sold her half of the Vanderbilt palace for $3.5-million and by doing so sealed its fate. She then proceeded to elaborately redecorate No. 854, adding the angel frescoes on the ceilings and the gilded cherubs within the ceiling moldings.

Henry died just two years after they moved in but Emily retained the home and in 1935 hers was one of just two households in New York (the other was her sister, Mrs Florence Twombly) that maintained a Rolls-Royce with not one, but two chauffeurs up front.

In 1946, Mrs Emily Vanderbilt White died aged 94 at "Elm Court," her summer home in the Berkshires. During the last two decades in Manhattan, she had seen the elegant houses around her fall like dominoes but she ensured that No. 854 withstood the barrage of commerce. In the same year that she died, the house was spared development when the Republic of Yugoslavia purchased it for $300,000 to serve as their new embassy in New York. It was quite a coup as most of the furnishings were included in the price and even then it was considered, "one of the finest private homes remaining on Fifth Avenue".

During the Cold War, its windows overlooking Central Park were bullet-proofed and it was here that the celebrated Yugoslavian President, Tito, hid out following an attempt on his life in 1963. For added security, the top-floor was fitted out with a metal-inlaid room (a "Faraday Cage") that blocked electromagnetic fields and allowed them to communicate with Eastern Europe without fear of messages being intersected nor phones tapped.

The house was placed on the market in 2018 for $50-million and an offer was made for $45-million but Yugoslavia had since been acrimoniously divided into five independent states (Bosnia, Croatia, Macedonia, Serbia and Slovenia) who could not agree on the sale and as of 2020 it remains on the market with a price tag of $50-million.