Completed 1881-1883, for William Henry Vanderbilt (1821-1885) as one of two hulking, conjoined palazzos that between them made three separate homes for his family and are therefore collectively known as the "Vanderbilt Triple Palace". Number 640, seen on the left, was Billy's half (containing 58-rooms) and two-thirds of the overall budget was lavished here. The immense buffed brownstones were the first of many such giants put up by the Vanderbilt family - for which their name soon became synonymous. For 64-years, 640-642 Fifth were symbols of the family's wealth and prestige, and perhaps symbolically, in 1945 they were demolished by an Astor...
zoom_in 10 images 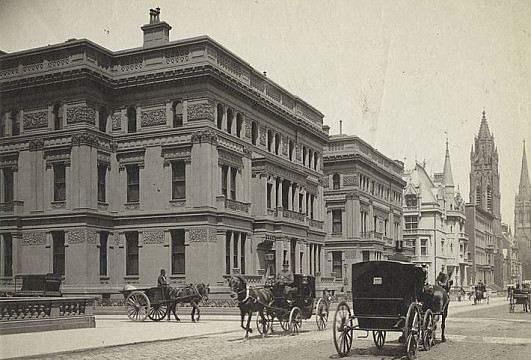 In 1877, Billy Vanderbilt - the eldest son of 'Commodore' Cornelius Vanderbilt - inherited $95 million and when he died eight years later he had more than doubled that fortune making him the richest man in America - not bad for a man whose father had once dismissed him as a "blockhead". One year after coming into his inheritance (1878), he endeavored to make his architectural mark on Manhattan and paid $700,000 for a block 150-feet deep on the west side of Fifth Avenue between between 51st & 52nd Streets.

Number 640 Fifth Avenue (on the south side of the block at the corner of 51st Street) was built for Billy, his wife (Louisa) and their youngest child, George, who was then still a teenager. The 58-room mansion had a width of 80-feet and a depth of 115-feet, so excluding basement and attics, this half of the Triple Palace enjoyed 27,600-square feet.

Number 642 Fifth Avenue (that to the north of 640) was to the outside eye identical, but inside it was divided into two separate homes for the eldest two of their four daughters: one half was occupied by Margaret, her notoriously useless husband, Elliott Fitch Shepherd, and their six children; and, the other was given to her younger sister Emily, with her (first) husband, William Douglas Sloane, and their then three children.

Between the two mansions was a courtyard leading to a shared, square entrance hall of 1,296 square-feet, centered by a 9-foot high green malachite urn - one half of a pair made for the San Donato Palace in Florence, Italy. The mosaic walls is this room reached one story and the ceiling was a delicately patterned stained glass skylight. Turn left, and a butler ushered you through to another hall - Billy's - which was an even larger and more impressive room. Otherwise, one was ushered right if calling at the Shepherds. The entrance to the Sloane's residence was around the corner on 52nd Street.

The design of the Triple Palace is quite often attributed to J.B. Snook, but just don't tell the Herter Brothers. In Wayne Craven's book on Gilded Mansions, he revealed a complaint made by Gustave Herter in 1886: "Herter Brothers were the architects… and are the only persons responsible for the designs, both of the exterior and the interior". They confirmed that Snook had been separately employed by Mr Vanderbilt to oversee its construction and that Charles Atwood (someone else unfairly credited) had been a draughtsman, but was in their employ. The Herter Brothers were responsible for the design of the Triple Palace.

When the plans were originally conceived, the idea was for a matching pair of white marble palazzos. There are two theories as to why America's richest man ultimately chose local brownstone over what is considered the height of luxury, Italian marble. The most popular of the theories suggests that on realizing how much longer it would take to complete in marble, and conscious of his declining health, Vanderbilt was in a hurry to get on and took the faster route. The other supposition was that Vanderbilt - ever the businessman - ultimately preferred to use brownstone from one of his own quarries rather than pay to have the marble imported. Bearing in mind that he intended to make a statement and money was no object, for my money, I am inclined to go with the former.

Billy Vanderbilt may have known his days were numbered, but his mansion was built to last. Under Snook's command was a team of either 1,600 or 600 labourers (depending on which account you read) working in conjunction with 60 skilled artisans (including sculptors) from Europe. At their thickest, the outside walls reached a rocket-proof 3-feet and internally they were a uniform 16-inches. Each of the palazzos were three stories high: the ground and first floor ceilings reached 16.5-feet; and, the bedroom ceilings on the third floors were 15-feet. The overall works cost $2 million, of which the lion's share (a reputed $1.3 million) was lavished on Number 640. In typical Victorian style, rooms such as the library, dining room and billiards room were panelled in heavy, ornate woods, while the drawing room was finished in an equally ornate French Baroque white and gold.

Vanderbilt: The Rise and Fall of an American Dynasty By Anderson Cooper

The Lions of Fifth Avenue: A Novel By Fiona Davis