Completed in 1909, for Charles Tuller Garland (1874-1921) and his wife, Margaret Williams (1881-1917). Inspired by Wilton House near Salisbury, it took three years to build and was designed by the society architect William H. Romaine-Walker (1854-1940). The gatehouse was just 100-yards from that of Moreton Paddox which was built for Garland's sister, Mrs Robert Emmet. The Garlands and Emmets were Americans, well-liked in the community, and who played prominent roles in World War I. Three years after Mrs Garland died in 1917, Charles sold Moreton Hall for £35,000 to Colonel Robert Ogilvie who lived here until 1938. During the next war it served as an agricultural training facility which became part of Warwickshire College from 1948. The house was devastated by fire in 2008 but the grounds are operated as the Moreton Morrell Centre and remain as one of the country's premier centres for agricultural, horticultural and equine training....
zoom_in 3 images 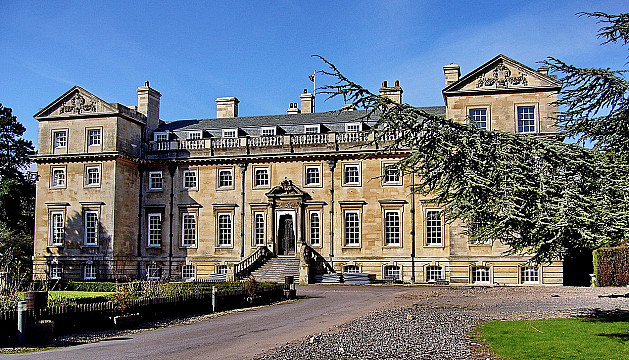 Charles T. Garland was an Eton-educated American whose father died in 1900 leaving him and his siblings several million dollars between them. In 1903, he married Margaret, whose father, Francis Williams (1845-1901) J.P., manufactured pins at Edgbaston and employed 347-people. Mrs Garland was born and bred in Warwickshire and when they were married she was living at Watchbury House in Barford which her father had rented in 1897 to the Chicago department store millionaire, Marshall Field, and his wife Delia.

Moreton Hall was reputed to have cost Garland $500,000 to build and it cost him a further $50,000 a year to run. Inside, it was noted for its beautiful plasterwork - particularly in the Dining Room, Library, and barrel-vaulted Great Hall - and wood panelling. The landscaped gardens were also laid out by the architect and included a blue garden, rockeries, a sunken Italian garden and a drive lined with Wellingtonia trees that are still seen today. The hall also had extensive stables, its own private polo and cricket grounds, and a real tennis court. Major Bouch recalled of Garland and Moreton Hall:

"Our new neighbour hunted hard. He played polo; he took a grouse moor and deer forest on the Atholl Estate; he entertained sumptuously; he married an English wife; he persuaded Walter Buckmaster – who may be termed the W.G. Grace of polo history – to come and live in the old Manor House with its monastic fishponds; he made his own polo ground where the best players of America and England and India competed in his tournaments; he provided a lordly village cricket ground with pitches smoothly rolled and a suitable rustic pavilion; he erected a Real Tennis court, which is probably the most modern in existence – and many think the best in the world".

The Country House: Past, Present, Future: Great Houses of The British Isles By David Cannadine

The Victory Garden: A Novel By Rhys Bowen