Built in the 1920s for Zalmon Gilbert Simmons II (1870-1934) and his wife Frances Etheridge Grant (1872-1964). The mansion is perhaps best known as the childhood home of Mrs Ethel (Skakel) Kennedy and her notoriously rowdy brothers and sisters. In 1950, her wedding reception was held here when she married Bobby Kennedy (1925-1968), and his brother, JFK, was the best man. It remains a private home....
zoom_in 1 images 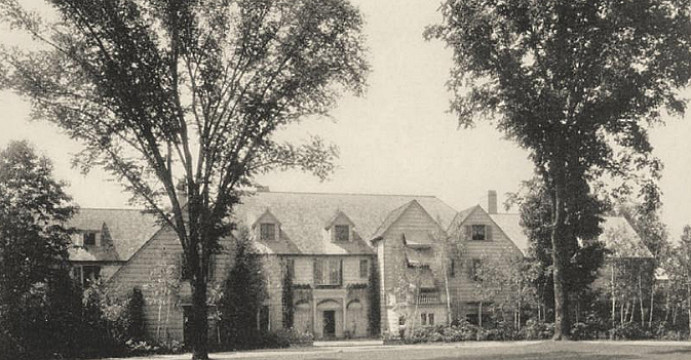 Zalmon G. Simmons "The Chief" of the Simmons Bedding Company

In 1910, Zalmon Simmons inherited the successful Simmons Bedding Company, founded in 1870 by his father, Zalmon Gilbert Simmons I (1828-1910). He turned it into a national concern and under him profits grew exponentially. Their mattresses were found in the White House and on two of the most luxurious ocean liners: S.S. Normandie and R.M.S. Queen Mary. By the time the family moved to Connecticut, Greenwich was said to have been the richest town per capita in the world and the Simmons' were among its wealthiest residents. In 1996, Simmons were still the world's largest bedding manufacturer.

Bedding Down in Greenwich

Simmons purchased a 164-acre estate in Greenwich upon which he built a rambling Tudor-style mansion with twin peaked roofs and an off-center porch, designed by Eric Kebbon (1891-1964). The gardens were laid out by the famous landscape architect Ferruccio Vitale, who emphasised informality. From the front, a wide terrace of expansive lawn swept around the house, fringed by American elms and centered by a large fountain.

The interior was designed by New York's most celebrated interior decorator of the era, Elsie de Wolfe (1859-1950). The 25-room mansion (with 6 maid's rooms) featured hand-painted chinoiserie wallpaper, black marble floors with inlaid copper and a study panelled with pine salvaged from a mansion in London. Mrs Simmons' dressing room was "exquisite".

The estate's outbuildings included stables, two greenhouses, a 6-car garage and a guesthouse with its own courtyard. Simmons built a pair of two-family cottages to house the butler, the chauffeur, the head gardener and the estate superintendent. It is said he built all the houses found on Simmons Lane (part of the original estate) for his family: the two largest were for his sons, Grant, who took on the family business; and, Zalmon III, Gold Cup winner of the American Power Boat Association.

"The Lawless Preserve" of the Skakels

Zalmon II died in 1934 and within a few years his widow had divided up the estate and sold it off in parcels. In 1938, she sold the mansion itself and 10 of its surrounding acres for $160,000 to George Skakel (1892-1955), the self-made multi-millionaire who had founded the Great Lakes Carbon Corporation. He moved in with his wife, Ann Brannack (1892–1955), and their seven famously rowdy children, described in Dumas' Greentown: Murder and Mystery in Greenwich, America's Wealthiest Community (2013):

'Rambleside' was the lawless preserve of the seven Skakel children. Of the boys, Jimmy and George were the wild ones - reckless, gun-loving lads who shot up statues, streetlamps, and mailboxes with high-powered rifles... Ethel was like Jimmy and George: fun-loving in a wild sort of way. She sped cars down the Merritt Parkway at night with no headlights shining, she galloped her horse across the black marble floor of the great house.

George Jr. first met Bobby Kennedy (1925-1968) at Portsmouth Abbey School in Rhode Island, and to say he disliked Bobby from that moment on would be too mild a way of putting it! Doubtless George was far from impressed when his sister, Ethel, got engaged to Bobby. They were married in 1950, with JFK acting as Bobby's best man, and the wedding reception for 2,000 people was held on the lawns at Rambleside.

Bobby's father-in-law was an entirely self-made man. Out of the public eye, he enjoyed quietly roaming around his estate caring little for his appearance. On several occasions, to his delight, he was mistaken for a gardener! Sadly, just five years after his daughter's headline-making wedding, George and his wife were killed when their renovated B-29 Bomber plane crashed outside Union City, Oklahoma, killing all on board.

In 1957, Bobby and Ethel settled at Hickory Hill in Virginia where their rabble of eleven children enjoyed a similar outdoors upbringing as that of the Skakels. It is thought all the houses built by the Simmons family on their original estate still stand today and although Rambleside is still a private residence, aside from being sold in 2014 for $3.2 million, its precise history since 1950 is unclear.

Framed: Why Michael Skakel Spent Over a Decade in Prison for a Murder He Didn't Commit By Robert F. Kennedy Jr.