Completed in 1844, for the former Mayor of Boston, Theodore Lyman II (1792-1849), who had previously been living at the historic Gore Place and whose father built the Lyman Estate, both in Waltham, Massachusetts. This house stood on a working farm of 60-acres and though named 'Singletree' as it stood at the foot of Singletree Hill, it is also sometimes referred to as the "Lyman House". This was Lyman's country residence and its design by the celebrated architect Richard Upjohn was the first instance of Italianate country house architecture in Brookline and afterwards had a significant impact on the style of other similar houses in the area....
zoom_in 2 images 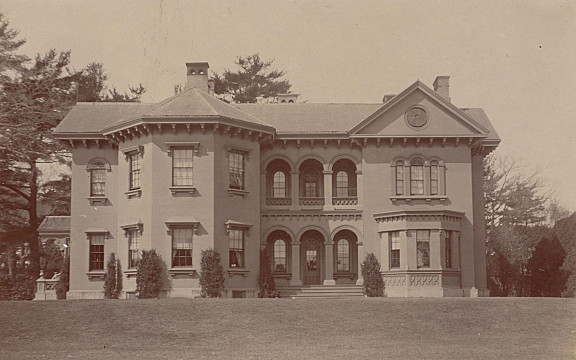 The former Mayor died shortly after its completion and he left Singletree to his son, Colonel Theodore Lyman III (1833-1897), while his daughter, Cora (Mrs Gardiner Howland Shaw) received his townhouse on Beacon Hill. Colonel Lyman was a veteran of the Civil War and an important natural scientist who ran many experiments here. He lived at Singletree for the remainder of his life with his wife, Mimi Russell, and their three children. After the death of Mrs Russell in 1911 the house was inherited by their elder son, Theodore Lyman IV (1874-1954), the well-known Harvard Professor and Spectroscopist. Two years after Prof. Lyman's death, the house was unceremoniously demolished in 1956.

Community by Design: The Olmsted Firm and the Development of Brookline, Massachusetts By Keith Morgan, Elizabeth Hope Cushing & Roger Reed