Built in 1850, for the newly-weds Levinus Clarkson (1831-1861) and his wife, Mary Livingston (1823-1898). It was built on part of the Clermont Manor estate (Mary's childhood and ancestral home) and the house itself was a duplicate of Levinus' childhood home, Holcroft House, built in 1822 at Potsdam, New York. Southwood was located just south of Mary's brother's (Robert's) estate, Northwood....
zoom_in 1 images 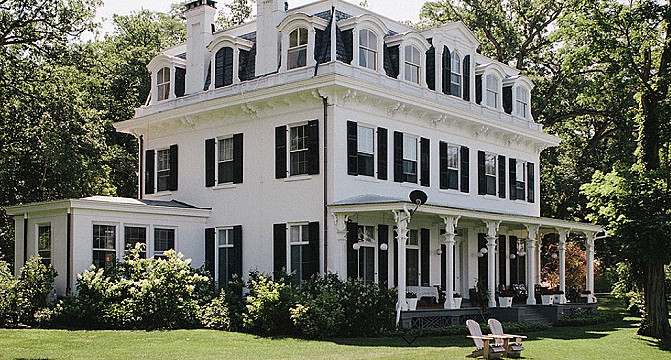 The Clarksons divided their time between here and their brownstone in New York City, 14 West 19th Street. Levinus died just eleven years later and his widow moved here permanently with their two sons. When her younger son, Robert, married in 1886, she gifted him the northern portion of the estate on which he built Midwood.

Mrs Clarkson continued to share Southwood with her elder son, Edward, until she died in 1898. Edward then inherited the estate but shocked society in 1913 by marrying not only a merely middle class girl, but a middle class girl forty years his junior!

Edward died in 1928 and he left Southwood to his young widow, Rachel. Rachel later remarried Fred Minkler (1889-1967) to whom she left the house after she died in 1948. In 1969, two years after Minkler died, it was purchased and subsequently restored by Hart and Beatrice Perry. It is still owned by the Perry family and is both a popular events venue and place to stay, with a guesthouse and the former gate lodge available for hire.