Completed in 1782, for Mrs Margaret (Beekman) Livingston (1724-1800), the widow of Judge Robert Robert Livingston (1718-1775). The house seen today stands on the foundations and is a direct copy of the original house built by Judge Livingston's father in 1730 that was burned by the British in 1777. Home to seven generations of the Livingston family, the elegant white-washed, Colonial mansion takes it name from the French for "Clear Mountain" owing to its view from the front door over the Catskill Mountains. In essence, it is the oldest of the great estates found in the Hudson Valley and the ancestral home of a great many of those who built those estates. Now known as the "Clermont State Historic Site," it attracts over 100,000 visitors a year....
zoom_in 18 images 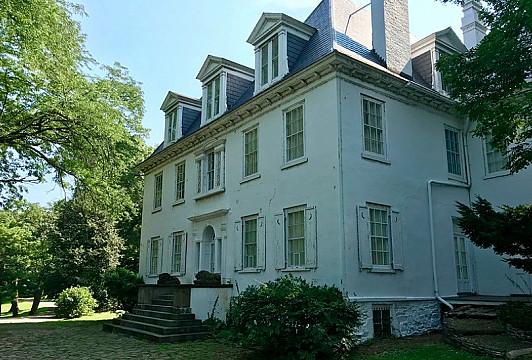 From 1686, Robert Livingston (1654-1728), 1st Lord of the Manor of Livingston, accrued an estate of 160,000 acres in the Hudson Valley. His second son, Robert (1688-1775), was gifted 13,000-acres in the south-west corner of this vast tract of land, legend has it, as a reward from his father for preventing a rebellion among their slaves. But, recent research has shown that Robert's father had in fact intended him to have that land since his birth.

In 1730, Robert and his wife Margaret Howarden (1693-1758) built themselves an imposing new home of fieldstone and brick on their slice of the Livingston land. Robert had intended to call it "Callendar" in reference to the Livingston's ancestral homeland in Scotland but his elder brother Philip Livingston (1686-1749), 2nd Lord of Livingston Manor, forbade him, considering it to be too grand an insinuation for a younger son.

Unable to call it "Callendar," Robert initially named his new home "Ancrum" (where his grandfather had lived in Scotland) before renaming it "Clare Mount" in about 1750, owing to the clear view over the river to the mountain range seen from the front door of the manor house. It was also around this time that Robert started buying up further land in the Catskills, amassing an estate of just under 500,000-acres by the time of his death.

Before Robert died, the Clare Mount estate was taken on by his only son Judge Robert Robert Livingston (1718-1775). In 1742, the Judge had married Margaret Beekman (1724-1800), sole heiress of Colonel Henry Beekman (1687-1775). Through that union the Livingston family came into the possession of the vast Beekman estates of some 100,000-acres along the east bank of the Hudson River in the Counties of Ulster and Dutchess. Some of the estates built by their children on this land include Rokeby, Grasmere, Montgomery Place, and the originals of Massena, Blithewood and Linwood etc.

As a large landowner, "The Judge" had not been altogether behind American Independence, but as a delegate to the Stamp Act Congress in 1765 - protesting against the new British taxes - he was said to have personally written the letter of protest sent to King George III. Just prior to the Revolution, he was appointed one of the "Committee of One Hundred" to watch over Americans suspected of trading with the British, but in the same year war was declared both he and his father died. Two years later, in reprisal for their disloyalty to the Crown, Major-General Sir John Vaughan (1731-1795) burned Clare Mount and the surrounding outbuildings including a mill that made musket powder for the rebel army.

Before the British arrived, the Judge's widow, Margaret, hid their silver in the garden fountain and escaped with her family to Connecticut. From 1779, she set about rebuilding the house on exactly the same plan as the original Clare Mount of 1730. There were 10-rooms on the ground floor alone; a basement for kitchen and staff; an upper floor for family bedrooms; and, an attic for the servant's bedrooms. Once completed in 1782, among others big names, Mrs Livingston entertained George Washington (1732-1799) and his wife Martha Dandridge. It was also from about 1782 that the family began to spell it "Clermont" - a distinctly American way of saying the British-sounding "Clare Mount".

"Old Clermont" & the other "Clermont"

The Judge was succeeded after his death by his eldest son, "The Chancellor" Robert R. Livingston (1746-1813). In 1770, the Chancellor had married Mary Stevens (1752-1814) and built a new home for his family just south of Clermont, called "Belvedere". This was put to the torch with Clare Mount in 1777 and he replaced it in 1793 with Arryl House, that confusingly was also known as Clermont. As Arryl was larger than his mother's house, he maintained what was then called "Old Clermont"), but chose Arryl as his family home.

On the Chancellor's death in 1813, the estate was broken up for the first time. After his mother, Margaret, had died in 1800, "Old Clermont" and most of the Chancellor's land holdings in the Town of Clermont had been made over to his eldest daughter, Elizabeth Stevens Livingston (1780-1829) following the occasion of her marriage to her cousin, Edward Philip Livingston (1779-1843). Edward started his political career as his father-in-law's private secretary in France and ended it as Lieutenant-Governor of the State of New York. In 1801, Edward and Elizabeth enlarged and made significant improvements to the house, and after Elizabeth's death, Edward made further alterations again in 1831.

Edward outlived his wife and died in 1843. In his will, he subdivided the Clermont estate into five parts, one part for each of his five children. Clermont Manor itself was given to his eldest son, Clermont Livingston (1817-1896). Edward's four other children built themselves country seats (Southwood, Northwood, Chiddingstone and Pine Lawn) on the lands they received, but predominantly settled into society life in New York City.

Clermont of Clermont, "Devoted to His Country Place"...

Clermont Livingston did not keep a townhouse, this was his permanent home where he first lived with his wife (and cousin - of course!) Cornelia Livingston (1824-1851) and their two children. However, the beautiful Cornelia died young and in 1857 he remarried his cousin/next-door-neighbour's (the artist, Montgomery Livingston's) widow, the more matronly Mary Colden Swartout whose father, by the way, was the Collector of Customs for the Port of New York who absconded after embezzling over $1 million! Clermont was a more sedate man than his father-in-law, his son recalled that he, "was devoted to his country place, a good shot and a good horseman, and devoted to his books (he) always sat for preference in our dining room, where his easy chair and sofa were installed".

The Thrice Married Farmer and the Frenchification of Clermont

Clermont's only son, the thrice married John H. Livingston (1848-1927), had been eager to pursue a legal career in New York City but the wind went out of his sails after he lost his first wife of only two years, Catherine Livingston Hamersley (1850-1873). From 1874, he took on a greater role in the management of Clermont Manor and that year undertook significant improvements to the house - most noticeably adding its distinct high-pitched roofs, giving it an air more reminiscent of the chateaux found in Northern France.

From 1880, he quit his legal career and moved permanently to Clermont with his second wife, Bessie Evans; his only daughter by his first marriage, Katherine; and, his orphaned nephew (Clermont de Peyster) while his father and stepmother moved into Arryl House.

John relished his new role as a farmer, establishing a commercial orchard and dairy farm at Clermont that shipped its produce to Manhattan via the railway station at Tivoli. In 1893, he made the final improvements to the old house, adding the library/living room. When his father (Clermont) died in 1896, he had expected to inherit the manor, but his father had so disliked John's second wife that he left the estate to John's daughter by his first wife, Katherine. So it was that soon after 1896, John was necessitated to buy back Clermont Manor from his daughter - which she happily allowed, for the sum of $1!

The Last Days of the Livingstons at Clermont

In 1906, John married his third wife, Alice Delafield Clarkson (1872-1964), a distant cousin twenty four years his junior who had grown up at Holcroft House. He was already fond of travel - and for several seasons had leased the magnificent Villa Corsi Salviati in Italy - but perhaps reinvigorated in his twilight years, in the early 1920s he took Alice and their two daughters to live in Europe for five years, on a cultural "stay-cation".

John died in 1927 at his winter residence in South Carolina, "The Bandbox". Alice, John's widow, remained in Clermont until 1944. She then moved into the former gardener's cottage and only opened the main house during the summer or for special occasions. She made alterations to the cottage to accommodate her unmarried daughter, Janet Livingston (1910-1972), while her elder daughter, Honoria Livingston (1909-2000), moved into "Sylvan Cottage" on the Clermont estate with her fiery Irish husband, Rex McVitty.

Neither of Alice's daughters left children, and in 1962 she sold Clermont, its furnishings and most of its land holdings to the State of New York for the benefit of the public. In 1991, her daughter, Honoria (the last of the family to live at Clermont) donated the remaining 71 of its 495-acres and a modest endowment for Clermont's preservation.

Since 1974 Clermont State Historic Site, as it is known today, has been restoring the house, outbuildings, formal gardens, and trails for the education and enjoyment of a growing local and national audience. In 1987 over 130,000 people visited Clermont to tour the mansion, enjoy the picnic grounds, participate in workshops or special events, view special exhibits, or hike & cross-country ski the 5-miles of historic carriage roads & trails

The house is a New York State Historic Site and was designated a U.S. National Historic Landmark in 1972. It is a contributing property to another National Historic Landmark, the Hudson River Historic District. The Friends of Clermont help to organize and administer many of the activities at the estate. They work with the New York State Education Department for programs benefiting all ages of the general public. Although the house is located in the town of Clermont, its mailing address is Germantown.

Revolution on the Hudson: New York City and the Hudson River Valley in the American War of Independence By George C. Daughan