Built in 1860, for the Rev. John Walton Romeyn Beck (1828-1889) and his first wife, Georgiana Boulton (1827-1864). Located just across the river from Peterborough, it was a private home before being transformed into the St. Joseph’s Hospital. It was demolished in 1969 to make way for a modern hospital building....
zoom_in 1 images 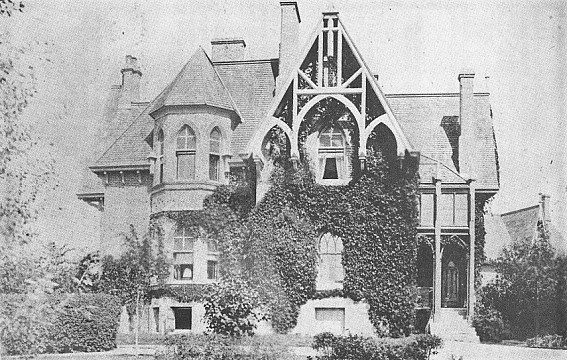 John Beck was the son of the Adjutant-General for the State of New York. After his father died in 1830, he was raised by his first cousin, Mrs Catharine (Beck) Van Cortlandt (1818-1895) with her large family at the historic Van Cortlandt Manor in upstate New York. By 1840, his mother had remarried and he moved into his stepfather’s house at Cobourg, Northumberland Hall. Eight years later (1848), he married his stepsister, Georgiana Boulton whose family were at the centre of the Upper Canada's ruling elite.
The Debt-Ridden Rector

In 1857, Beck was appointed Rector of St. John’s Anglican Church at Peterborough, Upper Canada. In 1860, the Rev. John Beck built his “large, beautiful” Gothic home in Ashburnham, just across the Otonabee River from Peterborough. He lived there for fourteen years with both his wives and all their children before running into financial difficulties. Stories abound that on several occasions John’s second wife, Margaret Brown, was seen at Cobourg having to buy back the Beck family silver!
Campbell & Burritt

In 1874, Beck’s financial woes caught up with him and he was forced to sell his home. He was under the impression that it was being sold to the Church, but instead it was purchased by a wealthy lumber merchant, A. H. Campbell, “an ideological opponent of his churchly beliefs at St. John’s”. Campbell and his brother-in-law, John Coonley Hughson (1820-1893) were the senior partners of Campbell & Co., who owned the Nassau Mills at Peterborough which were then the largest lumber mills of their kind in the country.
At about this time, St. Leonard’s was described as having “elaborate grounds, shrubbery and flower beds”. Just three years later, Campbell either died or sold the house to Dr Horatio Charles Burritt (1840-1916) and his wife, Maria Harriet Rogers (b.1846). Mrs Burritt was a great-granddaughter of the legendary Colonel Rogers of Rogers’ Rangers.
St. Joseph’s Hospital

In 1887, public funds were successfully raised to purchase St. Leonard’s in order to enlarge and transform it into a 25-bed hospital for the “sick, aged and orphans,” irrespective of religion. Architect John Belcher was hired and at a cost of $20,000 it was transformed into the St. Joseph’s Hospital which opened in October, 1888. It was finally demolished in favour of a modern hospital in 1969.