Built circa 1677, for  Stephanus Van Cortlandt (1643-1700), Mayor of New York and Chief Justice of the New York Provincial Supreme Court. He was the 1st Lord of the Manor of Cortlandt and by 1697 owned 86,000-acres in northern Westchester. The primary use of his house on the manor was initially for the storage of furs and it wasn't until 1681 that it was first occupied. After that date, it remained in the Van Cortlandt family until 1945. When its future looked bleak in 1953, John D. Rockefeller, Jr. stepped in and bought it, restoring both the house and grounds for the public....
zoom_in 2 images 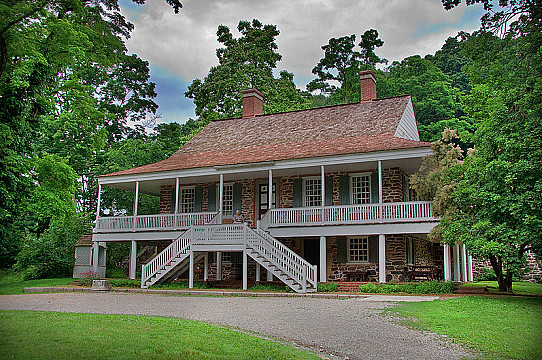 Stephanus' widow, Mrs Gertrude Van Cortlandt, died in 1732 when the manor house on the Croton River plus 10,000-acres was left to their eldest son, Philip. Unlike the Scottish Livingstons, the Van Cortlandt family followed the Dutch tradition of dividing their estates equally between all their children which meant that the manor was broken up and Philip did not become the 2nd Lord of the Manor. However, Philip did continue the business interests started by his grandfather and was elected to the Provincial Council. He made his home in New York and used the manor house only for fishing and hunting trips.

Philip died in 1746, leaving the manor house to his second son, Pierre Van Cortlandt, who moved in three years later (1749) with his wife, Joanna Livingston - first cousin of Robert Livingston (1708-1790), 3rd and last Lord of the Manor of Livingston. It was Pierre and Joanna who transformed the house into both a home and a working farm. They added the second story to the house and the porches. Nearby, they built barns, a carpenter's shop, a blacksmith's shop, a brick kiln, and laid out apple orchards.

During the Revolution, Pierre sided with the Patriot cause (unlike his nephew who built Cortlandt in England) and was a member of the Provincial Congress at White Plains that approved New York's Declaration of Independence in 1776. He later served as the 1st Lieutenant-Governor of the new State of New York and was frequently relied upon to step in as Acting Governor while George Clinton took to the battlefield. Pierre's eldest son, Philip, saw action as a Colonel and was a member of the court that tried Benedict Arnold.

During the war, Pierre moved with his family to what was referred to as the Upper Manor House at Peekskill, and then to Rhinebeck. In 1779, the vacated manor was raided by British troops. It was restored from 1783 and by 1803 Pierre and Joanna were once again living here full time.  After Pierre died, it became home to his eldest son who had by then retired from politics and in 1824 joined the Marquis de Lafayette on his tour of the States.

Into the 20th Century and out of the Van Cortlandt Family

Philip died in 1831 leaving his share in the manor to his nephew, Philip Van Wyck, and in 1836 another of his nephews, Pierre Van Cortlandt III, moved in with his wife, Catharine Beck. Catharine outlived her husband and after her death in 1895 left the house in equal shares to her children. Their eldest daughter, Ann, never married and lived here until her death in 1940. Five years later, it was sold by Ann's nieces to Otis Chatfield Taylor who owned a local newspaper but died shortly afterwards (1948) in a car accident.

Taylor's heirs sold the property to Jerry Britchey, the owner the Croton's Starlite driving range and mini-golf. He replaced the old outbuildings with the Starlite Drive-in Theater (where ShopRite stands today). Sensing an impending inglorious end, John D. Rockefeller Jr. stepped in and bought the property, restoring both the house and the grounds which he then opened to the public in 1959. It was one of three houses (including Philipsburg Manor and Sunnyside) that Rockefeller rescued, restored and opened to the public. Collectively, they are known as the Sleepy Hollow Restorations. It remains open to the public today.

George Washington's Westchester Gamble: The Encampment on the Hudson and the Trapping of Cornwallis By Richard Borkow

Sleepy Hollow Restorations: A Cross-Section of the Collection By Joseph T. Butler