Built 1826, for The Hon. George Strange Boulton (1797-1869) and his first wife, Elizabeth Boulton (1802-1838). This was one the oldest of Cobourg’s mansions and in 1899 it became the summer home to the Fitzhugh family from Pittsburgh who were instrumental with their in-laws, the Shoenbergers, for making Cobourg the “Newport of the North”. The grand old house was eventually demolished in 1974....
zoom_in 3 images 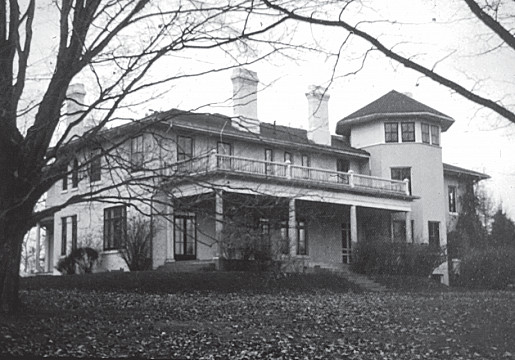 Boulton was a lawyer and Member of the Legislative Council, the son of the Attorney-General of Upper Canada, The Hon. D’Arcy Boulton Sr., (1759-1834) and a grandson of James Forster (d.1781), Chief Justice of the Isle of Ely. George was given his unusual middle name for his great-grandfather Sir John Strange (1696-1754), K.C., Master of the Rolls. The Boultons were old Lincolnshire gentry but in 1797 George’s father ran into financial difficulties and took the family to New York before settling in Canada.
The Boultons soon became known as one of the most influential families within Toronto’s “Family Compact”. George’s brother built The Grange in Toronto while George became a barrister at Port Hope. In 1824, he both married his cousin Elizabeth Boulton (1802-1838) and settled at Cobourg on being made Registrar for Northumberland County.
"A Beautiful Site Overlooking Lake Ontario"

Boulton acquired several acres east of Cobourg. The property ran south towards the lake and included what is today called Donegan Park but back then was referred to as “Boulton’s Woods”. On “a beautiful site overlooking Lake Ontario” he built Northumberland Hall, a brick and white stuccoed mansion in typical Georgian style, and named for the county in which it is situated. In 1831, a visitor remarked upon his “elegant mansion built on rising ground below the village”.
Boulton was fond of horse racing and laid out a track on his property, much like his nephew had done at The Grange in Toronto. In 1855, Northumberland Hall was also the starting point for a famous “Grand Steeple Chase” that ran from the rear of the house out east to the Haldimand Township line. It was the grand finale for what would later become the Canadian National Exhibition in Toronto. At the turn of the century, the property also hosted the Cobourg Horse Show.
Bringing Back the family Silver...

George’s first wife died in 1836. Four years later, he married Anna Maria Walton, a wealthy American heiress whose father, Captain Jonathan Walton (1759-1839), had helped found Port Hope before removing to Schenectady, New York. Anna was the widow of Nicholas Fairley Beck, Adjutant-General of the State of New York.
Boulton outlived both his wives and died at Northumberland in 1869. Only one of his three children married: Georgiana Boulton (1827-1864) who married her stepbrother the Rev. John Walton Romeyn Beck (1828-1889). Beck had spent his early childhood with his first cousins at Van Cortlandt Manor. In 1860, he built St. Leonard’s Grove but soon got himself into financial trouble. On at least one occasion, his second wife had to go to Cobourg to buy back the Beck family silver. In 1874, Beck was forced to sell St. Leonard’s and it is probably not a coincidence that Northumberland Hall was sold in the same year.
From Wool to Iron

In 1874, Northumberland was purchased by William Rosamond, (1839-1928), partner in his family’s woollen manufacturing company (the largest in Canada) of which his elder brother, Bennett Rosamond (1833-1910), was president. In 1877, William married Margaret Gertrude Boswell (b.1855), the youngest daughter of Judge George Morss Jukes Boswell (1804-1889), M.P., of Cobourg. It is thought that the Rosamonds were the first to lay out the grass tennis court.
In 1899, the Rosamonds left Cobourg and sold Northumberland to General Charles Lane Fitzhugh (1838-1923). Though born in New York, the General’s family were long settled in Virginia and closely related to the Lees of Stratford Hall and the Carrolls of Doughoregan Manor. Charles had distinguished himself in the Civil War as the youngest Brigadier-General in the Union Cavalry.
In 1865, the General married Emma Shoenberger (1842-1923), grand-daughter of Peter Shoenberger (1782-1854) the “Iron King” of Pennsylvania and one of the wealthiest men in the Commonwealth. When peace was declared, the General went into the iron and steel business at Pittsburgh with his father-in-law, George Krug Shoenberger (1809-1892). George and another son-in-law, William Parham Chambliss (1823-1887), took over the Cobourg & Peterborough Railway and were chiefly responsible for successfully marketing Cobourg as a summer resort for Pennsylvanian millionaires, when it became known as “Newport of the North”.
The Fitzhugh Estates

Mrs Fitzhugh’s father divided his time between Cobourg and Cincinnati where he’d built Scarlet Oaks and was known as one of “the seven barons of Clifton”. General Fitzhugh took over as President of the Schoenberger Steel Co., Pittsburgh, but continued to summer at Cobourg with other members of the extended Shoenberger family. The General built Ravensworth for himself and wishing that both his sons would continue to summer at Cobourg, he gave Northumberland to (William) Henry Fitzhugh (1867-1953) and built East House for Carroll Hamilton Fitzhugh (1876-1966).
In 1906, the house sat within 12-acres of parkland with gravel walkway that were raked daily. Henry made several additions giving it a more contemporary appearance. He extended it to ten spacious rooms and added further servant’s quarters. A breakfast room was added, and he enlarged the drawing room on the south side that was noted for its high ceilings and two fireplaces. He also built the three-story tower that gave a magnificent view out across Lake Ontario.
Harry Fitzhugh

Henry (also known as Harry) became an enthusiastic racehorse owner and polo player which led to him buy another property near Louisville, Kentucky. At Northumberland Hall, to accommodate his passion, aside from adding a tennis court there, he built a polo field and new stables in addition to the race track.
Henry Fitzhugh was married three times: His first wife was Winnifred Lee Poe (1866-1891), the daughter of General Orlando Metcalf Poe (1832-1895), another distinguished Civil War veteran and Great Lakes engineer who summered at Cobourg. She died in childbirth just one year after they were married. He married secondly Edith Muriel Frances Daintry (1874-1920), also of Cobourg, who tragically took her own life at Northumberland in the summer of 1920. His third wife was the younger sister of his first wife, “Betty” Elizabeth Poe (1873-1952).
Henry died at Kentucky. Only his youngest child, (John) Daintry Fitzhugh (1899-1978) continued to summer in Cobourg, at The Poplars, which he had inherited from his mother's family. When his father died in 1953, he moved into Northumberland Hall. But, after the death of his uncle, Carroll Fitzhugh, in 1966, he inherited and moved into his uncle’s old home, East House. He maintained Northumberland until 1974, when it was sold for development and demolished.