Built in 1831, for Henry James Anderson (1799-1875) and his new wife Frances Da Ponte (1799-1841), daughter of Lorenzo Da Ponte, the Father of Italian Opera in the United States of whom it was said: "Seldom, if ever, indeed, had a man of more interesting personality come to these shores from Europe". Henry J. Anderson was Professor of Mathematics and Astronomy at Columbia University but he was also a zealous Catholic convert who'd been frequently received and honored by Pope Pius IX and had previously been living in the Da Ponte household prior to his marriage. The distinctly classical home he built here was designed by New York's Josiah R. Brady but would not have looked out of place on any one of Rome's hillsides. The entrance to the estate was situated off East Tremont Avenue at the intersection with Schley Avenue while the estate itself was bounded by today's Randall, East Tremont and Sampson Avenues....
zoom_in 2 images 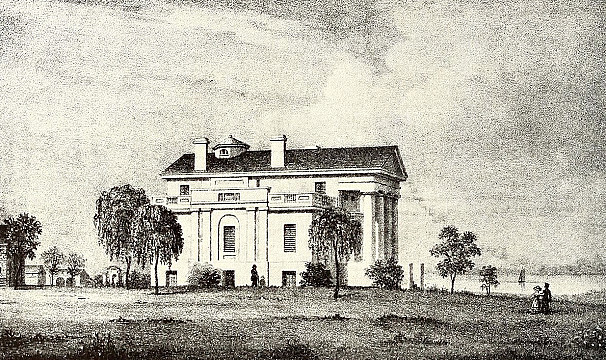 Catharine Lorillard Wolfe, of 13 Madison Avenue: "Not Interested in Matrimony"

Most likely soon after Mrs Anderson's death in 1841, it was purchased by John David Wolfe and his wife, Dorothea Ann Lorillard. Throgg's Neck was the preserve of the Lorillard family and where many of Mrs Wolfe's siblings kept equally impressive mansions. Her husband, John D. Wolfe, is remembered as one of New York's most prolific philanthropists and they divided their time between here and 13 Madison Avenue.

After Wolfe died, his good works were continued by his only surviving child, Catharine Lorillard Wolfe, who is still remembered for donating her entire collection of 140-paintings to the Met Museum in New York and for building Vinland in Newport. The Doric House (named for the Doric Order used in its overall classical design) was her country home too, and many of the paintings now seen in the Met adorned its walls. She died in 1872 and after the mansion was sold by her heirs circa 1895 it nearly made a century before being demolished in 1929 to make way for Edison Avenue.