Catharine Lorillard Wolfe, of 13 Madison Avenue: "Not Interested in Matrimony" 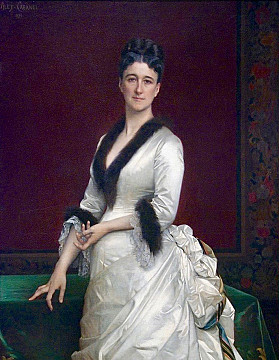 She was born in New York City to an extremely philanthropic and very wealthy father (described as "a cheerful giver") who co-founded the Chemical Bank. Her mother was a daughter and co-heiress of Pierre Lorillard II, of the Lorillard Tobacco Company. She was given the best education that was, "improved by visits abroad, which she made quite often in company with her parents". Her father collected art and her cousin, John Wolfe, was said by the amateur art historian, William Michael Rossetti, to be in possession of, "the finest collection of pictures in New York". By the time she was in her twenties, she had a good knowledge of art and was said to be among the most accomplished women in New York society. But, having already lost both her siblings when her mother died in 1866 she became her father's companion and assisted him in dispatching his liberal and far-reaching charity. After he died in 1872, she determined to continue his philanthropy and from that year on gave $200,000 annually to charity.

She gave "quietly" but some of her known gifts included a church on Mulberry Street for the Italian Mission and the purchase of land at 90 Fourth Avenue and 29 Lafayette Place for Grace Church, all repairs and improvements to which were made at her expense. The vestry room that she paid for was said to be "a gem" and she gave a further $70,000 for the new spire. She bought 13-acres at Fordham as a Home for Incurables; built "the splendid" Newsboys Lodging House; a Home for Consumptives; and, established a bursary for "one of the colleges" to educate young men with an aptitude for mission work in the south. She gave a valuable collection of shells and the library on conchology to the American Museum of Natural History in memory of her father who had been its president, with an endowment fund to grow the collection. She gave over $200,000 for the construction of the American Church at Paris as well as large gifts towards the American Church at Rome, the school at Athens, and the Wolfe Expedition to Babylonia.

In 1873, she commissioned the previously mentioned William Michael Rossetti to collect paintings for her home at 13 Madison Avenue, as well as other connoisseurs in Europe to expand her collection for all her houses. Her cousin, John Wolfe, encouraged her patronage of Alexandre Cabanel, a celebrated French society portraitist, as well as other important European academic artists. But, her most generous gift came after her death in 1887 when she donated her collection of 140-paintings (valued at $1 million) to the Metropolitan Museum of Art to be displayed in a fireproof room bearing the name of their donor. The gift also included an endowment of $200,000 (the Wolfe Fund) for the upkeep of the collection and further acquisitions. The collection includes some of the most prominent European artists of her era, eg. Meissonier, Gérôme, Édouard Detaille etc.

When she died at 13 Madison Avenue, her servants were reported to have said that they had "lost their best friend... she was always kind and considerate to each one of them". Her fortune was estimated to be between $3-5 million, giving her an annual income of $500,000, and she used to say, "she did not care how much money she gave away if she could feel it was given to a worthy object". She was sociable and, "was rarely without guests" at her three properties: 13 Madison Avenue, New York; the Doric Mansion at Throgg's Neck; and the mansion with which she is best associated at Newport, Vinland.

While she was rumored to have had a romance that was benevolently alluded to in her father's will, for whatever reason she spurned every proposal of marriage put before her - and there were many. But, she grew so tired of these advances that under her name on her calling cards she was eventually compelled to print: "Not Interested in Matrimony".