Completed in 1883, for Catharine Lorillard Wolfe (1828-1887), though better associated with the Vanderbilt-Twomblys. Today, Vinland is better known as Salve Regina's McAuley Hall, but it is one of the most interesting of the Gilded Age mansions being unique for its Viking theme. It inspired nearby Rough Point and was built at a time of great excitement when it was supposed that Newport's Round Tower may have had Viking origins! It stands opposite Wakehurst and Catherine specifically built it next door to her first cousin Pierre Lorillard IV whose sprawling mansion was burned down and replaced by the now iconic mansion of the same name, The Breakers....
zoom_in 6 images 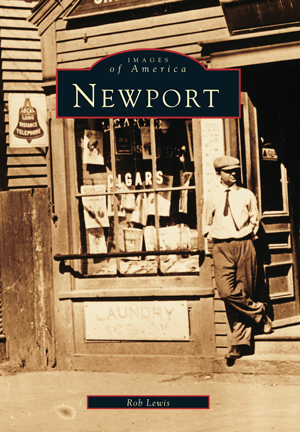 Ghosts of Newport: Spirits, Scoundres, Legends and Lore By John T. Brennan
Catharine was an unmarried heiress with an estimated fortune of $9 million. She never married, but received so many wedding proposals that on her calling cards she felt compelled to inscribe beneath her name: "Not Interested in Matrimony"!

She was the daughter of John David Wolfe (1792–1872) who made a fortune in the hardware business and New York real estate. Her mother was a daughter of Pierre Lorillard II (1764-1817), of P. Lorillard & Co., Tobacco Manufacturers, who although not the first "millionaire" nor the richest man in America, was the first man to be described as a millionaire in America: "He led people by the nose for the best part of the century, and made his enormous fortune by giving them that to chew which they could not swallow"! Among other things, Catherine used her portion of that fortune to build the Grace Church in Manhattan, but she gained international renown as one of the most significant collectors of modern oil paintings and water colors. She left her valuable collection with a generous endowment to the Metropolitan Museum of Art in New York.

For many years, Catharine had summered in her father's modest house overlooking the Newport Tower in Touro Park. In 1881, she paid $192,000 for a 13-acre plot of land off Ochre Avenue, previously owned by William Beach Lawrence (1800-1881), Governor of Rhode Island, on which she commissioned the architects Peabody & Stearns to build her a new mansion with formal gardens designed by Ernest William Bowditch (1850-1918).

In 1883, at a cost of $50,000, her mansion was finished in the popular Richardsonian Romanesque style, built of red sandstone and ashlar. It captures an important slice of Newport's history by reflecting the excitement that then prevailed throughout the town when it was believed that Newport's Round Tower may have had Viking origins. Using that romantic sentiment, the house specifically incorporated Viking designs and motifs. She also gave it a Viking name taken from the poem "The Skeleton in Armor" by Henry Wadsworth Longfellow (1807-1882). According to Norse mythology, Vinland ("New World") was the name the Vikings gave to America when they reputedly landed here.

The grounds are entered via an elaborately decorated wrought iron gate and from there the drive leads up to front entrance flanked with Roman Doliums either side and covered by the large arch of the porte-cochère. The Romanesque exterior is marked with a variety of motifs that include Nordic symbols, abstract geometric patterns, leaves, vines, flowers, grape clusters and even a Viking ship on the roof. The outbuildings match the main house in style and included stables, a carriage house and a potting shed; and, the estate was bordered by a fence inspired by the architecture of Scandinavian stave churches.

Vinland's interior was overseen by Richard Codman (1842-1928), a close friend of Henry Hobson Richardson (1838-1886) since having been fellow members of the Porcellian Club at Harvard University. Again, Celtic/Viking elements were displayed throughout the house from carved belt courses and window casings; motifs on the fireplaces and dark-wood panelling, through to murals, frescoes and stained-glass windows. They even went to great pains to depict only those Vikings who were believed to have come to America.

The noted English designer Sir Edward Coley Burne-Jones (1833-1898) designed several of the windows and murals; and, for the staircase windows Catharine commissioned a set of stained-glass panes by William Morris (1834-1896) that depicted Viking explorers, Viking ships and the Norse Gods Odin, Thor and Frey. A mural frieze in the dining room was completed by yet another celebrated English artist, Walter Crane (1845-1916), telling the tales of Longfellow's The Skeleton in Armor and the Viking origins of Newport Tower.
The Vanderbilt-Twomblys

Catharine only lived long enough to enjoy four summers at Vinland. On her death, she left Vinland to her first cousin, Louis Lasher Lorillard (1849-1910), of New York and Portsmouth, Rhode Island. In 1896, after being on the market for several years, it was eventually sold to Hamilton Twombly (1849-1910) and his wife Florence Vanderbilt (1854–1952), whose brother had just completed The Breakers next door.

Mrs Twombly required further space for entertaining and so from 1907 to 1910 the house underwent significant changes on being enlarged to 50-rooms. Hiring the original architects, the first phase of works saw the house cut in two and elongated by fitting a new central section. The next phase saw an additional 10-foot floor added between the two originals, creating its present three-story appearance. Overseen by Ogden Codman, Jr. (1863-1951), the Twomblys redecorated with a mix of heavy French Baroque and Louis XIV flair; and, much of Catharine's Viking theme was lost, as was the original hall with its high oak beams, wainscoting and walls once draped in Flemish tapestries.

On Mrs Twombly's death in 1952, she left Vinland to her two surviving children. The younger  died just two years later and the following year her sister, the widowed Mrs Florence Burden donated Vinland to Salve Regina University when it was renamed "McAuley Hall". The university's library was transferred from Ochre Court to McAuley Hall until it outgrew the old mansion, necessitating the construction of the McKillop Library. Today, Vinland houses faculty offices, student meetings, and certain classes.