Completed in 1885, for the Misses Julia Appleton (1859-1887) and her sister Mary Appleton (1862-1935). It was designed by Charles F. McKim of the celebrated New York firm McKim, Mead & White who promptly afterwards married Julia Appleton. In August, 1889, they leased the house and its 8-acres of grounds to Anson Phelps Stokes and his family who purchased it that October. Stokes described it as a, "remarkably good specimen of early colonial architecture... the entrance court was around a very large elm tree (seen in the picture below), which had a seat about it." They enlarged the house to 40-rooms but by 1891 had started work on the 100-room Shadow Brook. In 1905, while leased to Eric B. Dahlgren and his wife Lucy Wharton Drexel, a fire broke out and it was burned to the ground. Local cottagers bought the site to keep it from falling into 'foreign' hands and today 57 and 61 Cliffwood Street stand on the former estate....
zoom_in 7 images 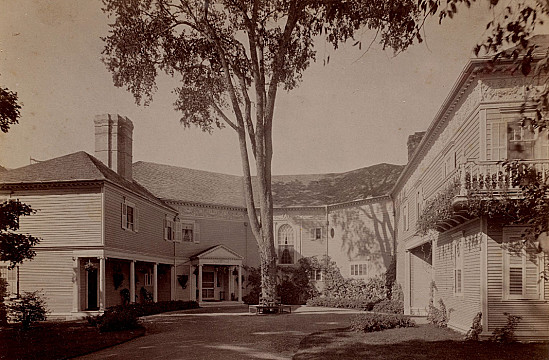 Eric B. Dahlgren, of New York

When the Stokes bought the house on October 9th they christened it "The Homestead". Although it lacked a ballroom, they wasted no time in borrowing a tent from New York to host a ball that same autumn that Stokes recalled as, "probably the greatest season they ever had there". The tent then did the rounds when it was then borrowed by William C. Whitney at Schermerhorn Hall and after that by "the young men of the Lenox colony".

In 1890, the Stokes enlarged the house to more than 40-rooms, including a 35-by-55-foot ballroom that fitted in with, "a fine hall, drawing room, morning room, staircase hall... and a large library". Despite the improvements, in 1891 the Stokes' decided to build afresh and work started that year on the 100-room Shadow Brook. Rather than sell, the Stokes rented it out and in November, 1903, Eric B. Dahlgren took a two-year lease.

It was while Mrs Dahlgren and her nine children were resident on July 14th, 1903, that the smell of kerosine was detected but not investigated before a fire broke out in the basement. By the time it was put out three-and-a-half hours later, all that remained standing were the two brick chimneys. Locals purchased the site to ensure it remained in the hands of people they found agreeable and in 1914 the architects Harding & Seaver were commissioned to build two houses on the former estate at 57 and 61 Cliffwood Street, which although differently numbered (one is now No. 71) still stand today.

The Houses of McKim, Mead & White By Samuel G. White