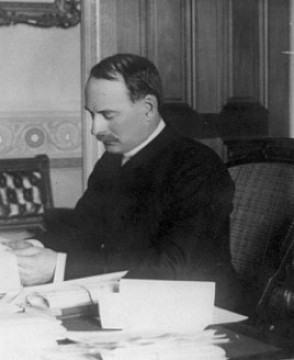 He was educated at Yale where he was a Member of the Skull and Bones Society. He is best remembered as the U.S. Secretary of the Navy under Grover Cleveland, but he was a man with his fingers deep in some very tasty pies and through facilitating contracts and loans to himself and his cronies, he accumulated one of the largest fortunes of his era. His brother, Henry Melville Whitney, was President of the Metropolitan Steamship Company and the Dominion Iron & Steel Company, and was therefore well-placed when William decided the U.S. Navy needed a new, modern fleet...

He owed a large part of his success to his brothers-in-law: Oliver Hazard Payne, with whom he shared a room at Yale was a co-founder of Standard Oil; and, Charles T. Barney, was President of the Knickerbocker Trust. When Whitney took over the State Trust Company he used it to give illegal loans to a small group of powerful men who included among them P.A.B. Widnener, Anthony N. Brady, Thomas Fortune Ryan etc. Within just five years, William Whitney had earned himself over $40 million and was then considered a possible candidate for U.S. President. He used part of his fortune to establish one of the largest and most successful thoroughbred racing stables in America, co-purchasing the Saratoga Racecourse too, which under him and his investors became what it is today.