Completed in 1906, as a summer home for Bryce James Allan (1862-1924) and his wife Anna Palfrey (1869-1942), of Boston. Located on the famed North Shore between Boston and New Hampshire, their summer home was well-known for the lavish parties they held here. After Mrs Allan died it was acquired by Endlicott College and today it is a popular wedding and events venue....
zoom_in 7 images 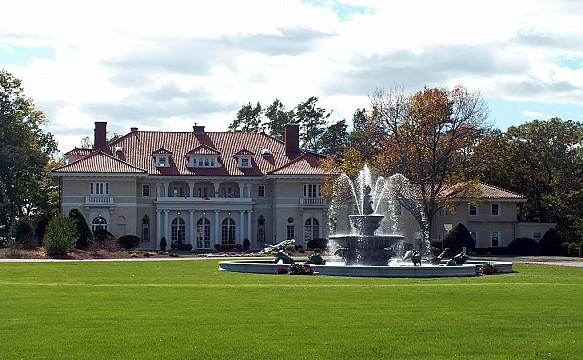 Bryce Allan grew up at Ravenscrag in Montreal and Anna's family were at the center of Boston society. As a grandson of the founder of the Allan Shipping Line (established in 1819), Bryce came to Boston to open a new office for the family-run business sometime in the early 1880s. The Allan house in Boston at 255 Beacon Street (since demolished) was an equally sumptuous residence and the ballroom was not dissimilar to that at Ravenscrag.

The Allan's were married in 1896 at Anna's first cousin's summer home, Woodrock, just further along the street from where they would build their summer home. They initially kept a cottage at Beverly Farms which they sold to Quincy Shaw Jr., but In 1903, they employed the well-known Boston society architect, Guy Lowell, to design their new home at Pride’s Crossing. The result was an imposing Italianate mansion that they named "Allanbank" overlooking the Atlantic Ocean at Beverly Cove.

Lowell’s design of Allanbank was a grand conception, noted for the arcades on the façade of the house and the classical detailing of its interior. A large, flat lawn with a decorative fountain was spread out in front of the house, obscured from the road by immense beds of rhododendrons. As the spectacular view dropped towards the Atlantic at the rear of the mansion, there was a natural growth of native trees that edged the shoreline.

During their time here, the Allans were well-known for their generous hospitality and lavish entertaining. The library and billiards room still function today. Bryce, like many of his family, was passionate about horses and the property included a vast stable for his prized thoroughbreds, in the same design as the main house.

After Mrs Allan died in 1942 her heirs disposed of the estate to Endlicott College and it was renamed "Tupper Manor" for the Tupper family who founded the college. The house was originally converted into a hall of residence and the stables into classrooms, but since then Tupper Manor has been meticulously restored and is now part of the Wylie Inn and Conference Center at Endlicott College.

Green and Gold Coast: A History of Golf on Boston's North Shore By Gary Larrabee