Built circa 1885, for State Senator Martin Brimmer (1829-1896), the first President of Boston's Museum of Fine Arts, and his wife, Mary Anne Timmins (1827-1906). They named their English half-timbered summer home "Woodrock" and in 1886 their orphaned niece, Minna Timmins, was married in the parlor here to the author and philosopher John Jay Chapman - who often wrote about what colleges ought and ought not do - when an 18-piece orchestra played throughout the night. Sadly, Minna died just twelve years later in childbirth and Chapman then married Elizabeth Astor Winthrop Chanler, one of the rowdy but talented "Astor Orphans" of Rokeby. Shortly before Brimmer died, he sold Woodrock to Herbert M. Sears and his wife Caroline Bartlett....
zoom_in 5 images 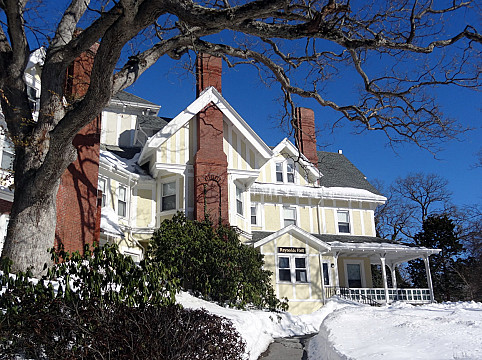 Herbert M. Sears was best known as a stockbroker and yachtsman, and for nine years was Commodore of the Eastern Yacht Club in Marblehead, Massachusetts. His father-in-law, Francis Bartlett, summered at Pride's Crossing and made headlines in 1903 when he gifted antiques from his own collection to the Boston Museum of Fine Arts, valued at $1 million.

In 1896, Woodrock played host to another fashionable wedding, when Mrs Sears hosted the wedding of her first cousin (Anna Palfrey) to Bryce Allan. Soon afterwards, the Allans built what is now Tupper Manor which also makes up part of the Endicott College campus. For the summers of 1902 and 1903, the Sears' leased Woodrock to the Pittsburgh steel magnate Henry Clay Frick who became so enchanted with the area that he built his own summer bolthole here, the 104-room Eagle Rock, a bit further along Hale Street.

By the mid 1920s, the Sears sold up and Woodrock became the Kendall Hall School for Girls. In 1939, it became the first property purchased by the newly established Endicott College and was named for Grace Morrison Reynolds, a founding trustee.

The Mind On Edge: An Introduction to John Jay Chapman's Philosophy of Higher Education By Alan L. Contreras