The house seen today was completed in 1893 as a summer home for George Hale Morgan (1840-1911) and his wife and cousin Sarah Spencer Morgan (1839-1896), sister of "America's Greatest Banker" J. Pierpont Morgan. Ventfort Hall is an imposing Jacobean-Revival mansion that is typical in scale and grandeur of the Gilded Age Estates put up in The Berkshires. Ventfort Hall was famously used to depict "St. Cloud's Orphanage" in the movie The Cider House Rules (1999). Supposed to be haunted, the mansion is operated today as a house museum dedicated to the Gilded Age....
zoom_in 19 images 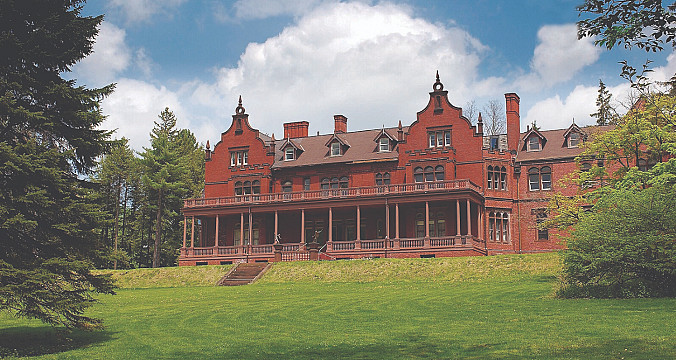 The site on which the Morgans built their summer home had originally been occupied by a more modest dwelling, known as "Vent Fort" owned by the Haggerty family. In 1863, Civil War hero Colonel Robert Gould Shaw (1837-1863) - whose life is told in the movie Glory - spent his honeymoon here with his new wife, Annie Kneeland Haggerty (1835-1907). After his death, Mrs Shaw moved to Europe, living between France and Switzerland, and only returned to Vent Fort for her two last summers, renting the house from the Morgans.

The Morgan's new home cost $900,000. On completion, the 28,000 square foot house contained 15-bedrooms, 13-bathrooms, 17-fireplaces and was surrounded by 26-acres (now 11.7 acres) of landscaped gardens. The entrance hall rises up three storeys and the magnificent staircase is finished with wood panelling. The house boasts an elegant drawing room, dining room, billiard room and a bowling alley too. There are several outbuildings including two gatehouses, a carriage house/stables and 6 greenhouses.

After George Morgan died in 1911, Ventfort was rented for a time to Mrs Margaret (Emerson) Vanderbilt, the widow of Alfred Gwynne Vanderbilt (1877-1915) who lost his life on the RMS Lusitania. In 1925, the house was purchased by William Roscoe Bonsal (1869-1933), and his wife Mary Minturn Potter (1874-1940). The Bonsal's children sold the property in 1945 after which the house served variously as a dormitory for the music students of Tanglewood; a summer hotel; the Michael Fokine Ballet Summer Camp; and as community housing for the religious organization, "The Bible Speaks".

In 1991, a nursing home developer planned to demolish Ventfort and it sustained significant damage as part of the roof collapsed and the panelling was stripped from the walls. In 1997, the house was rescued by the Ventfort Hall Association, a non-profit organization that has been repairing the damage while creating a museum to the Gilded Age. In 1999, the house featured as "St. Cloud’s Orphanage" in the award-winning movie The Cider House Rules and several scenes were shot on the staircase in the Great Hall.